A Plague and Biomass 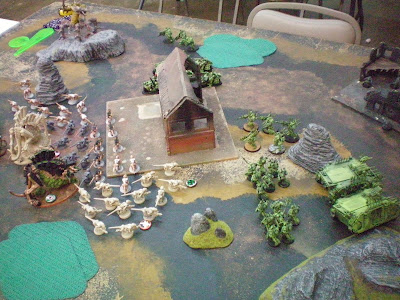 I had recently gotten a game in against Nemisis and his Deathguard Tally list. Multiple objectives (3) and diagonal deployment. I got something useless on my Tyrant for a warlord trait, and I think his was something like scoring for his nurgle bike lord. This isn't his only practice game against Tyranids. You can read the battle report here when he faced our other Nid player. He rolled for his boon of mutation, got 2 boons, one being +1W, the other being +1T. Nurgle smiles upon his followers it seems.

First turn saw both of us moving up to midfield, He got into position to start racking up kills once epidemius came in. His defiler Soulgrinder came in the first wave, and kept my warriors pinned in cover.

His next turn, Epi came in but mishapped and when back into reserves. He ended up killing 30+ of my gaunts in a single turn of shooting. My mawlocs aimed for his Oblits in the back, both scattering 9 inches in different directions. He assaulted one with the oblits, and the other with the soulgrinder. I smashed the soulgrinder with a lucky hit, and killed an oblit, and hit and run away. 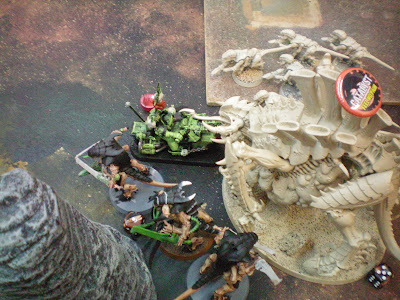 With the soul grinder dead, my warriors were free to move up. My genestealers had assault his bikes the previous turn, doing like 2-3 wounds to the lord, and killing one bike, but the Black mace tore through them in one sweep. So I piled both my bonesword warriors, Alpha warrior, Tervigon, and gaunts all into the squad the next turn. With the Tervigon tying up the lord in combat, the Alpha warrior massacred the rest of the bike squad. The Tervigon took 2 wounds from the mace, but managed to put one more on the lord. Taking a toughness test on my Alpha warrior (from the mace) saw him taking a wound. He is tough 5, so I only fail on a 6, and he had taken a wound from the soul grinder's cannon, so only 1 wound left for him.

This entire time Epi came in again, and mishapped back into reserves again (if I recall, though it didn't matter much at this point) and my Tyrant refused to come in from reserves. Gaunts and the other tervigon drew the rest of the armies fire on the other flank.

So back to the major combat. The lord did another wound to the Tervigon, and he failed his toughness test (rolled anther 6) and was removed from the game (or killed out right or what ever the silly rule is). The toughness test killed 2 more gaunts, and I failed another test on the alpha warrior, killing him. So my one model that had a good chance of finally killing the lord died. On his combat, the AP4 mace ripped the rest of my warriors apart before I could swing. 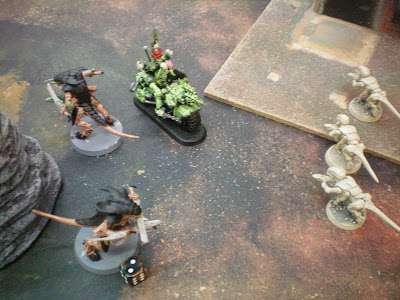 The following turn I tried hitting the terminators and plague marines with mawlocks, but continued to scatter way off each time. Once got assaulted by plague marines, took a wound, killed one, and hit and run away to assault back in. The other got assaulted by the bike lord after getting wounded by skarbrand and other plasma guns. He failed two armor saves to the mace and was also killed.

By this point I had pretty much lost the game, no troops and only like 3 models left on the table, I just wanted to kill the lord. So my hive tyrant came in, and assault the lord. With 5 attacks at Ws8 and S6, I would have thought I could have done one more wound, but no, T7 proved too tough to crack. So game ended after fifth turn, and I hadn't killed the lord. +1T and +1W on a nurgle bike lord is just mean, and is the only reason he was still alive. 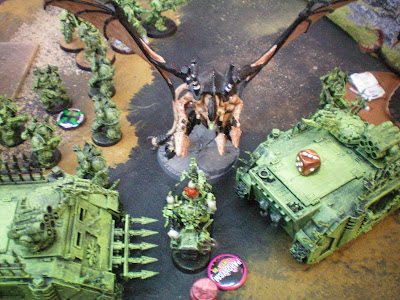 Even without Epidemius contributing, a Nurgle themed list is very mean. They are incredibly resilient and can pack a mean amount of firepower as well. I feel they would be even tougher for a MEQ army, who doesn't have clever xeno tricks to try and pull. Having my almost 300point warlord not come in till the end really hurt as well. So far the Nurgle/Tally list is the toughest Chaos army I've faced with my nids. Anyone else having trouble or fun with Chaos?
posted by TheGraveMind at 5:32 PM