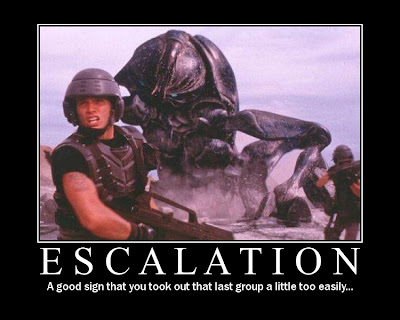 I've recently started up an escalation league with my tyranids. I've decided to go back and finish painting them as I've never really had a finished and well painted army. I almost had my bugs finished right before the new codex hit, but then I had to switch out most of my units. My blood angels I painted to three colors the night before the Indy Open last year, so they really aren't to the standard I know I can paint. We've started off at 500 point, and we'll be progressing at 250 increments. (speaking of 500, looks like we just hit 500 followers. WOO HOO!) Here is how 500 points has gone so far.

In this league the list builds, so you can add units and upgrades, but you can't take away, so you need to have an idea of how you want your end list to look. Each game gives you a point, a win another, and fully painted a third, up to a limit per point level. Since I've been working on a conversion for my biovores, I haven't been fully painted yet. 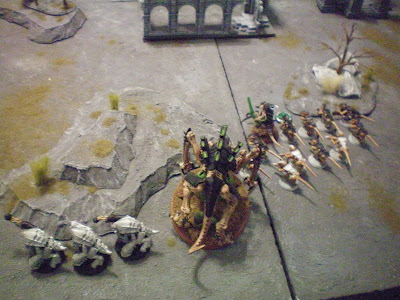 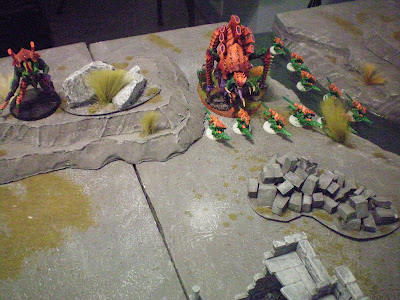 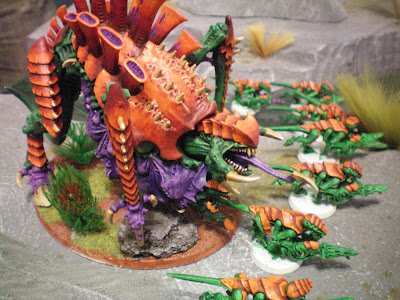 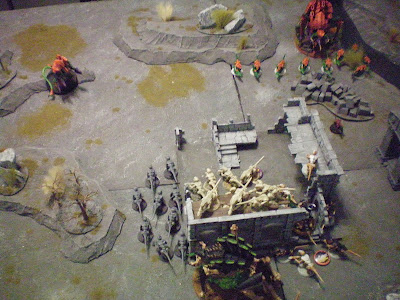 My first game was against another tyranid player. He had taken a Hive tyrant and tervigon, while I took an Alpha warrior, Tervigon and biovore. I was winning the majority of the game, but the last turn, both his tyrant and tervigon won combat, and were able to consolidate towards the objectives, pulling out a win for him. 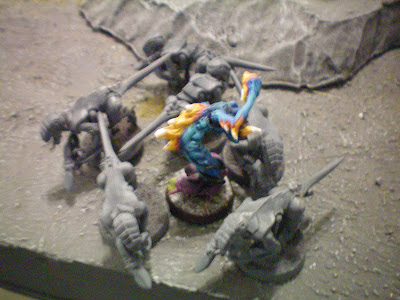 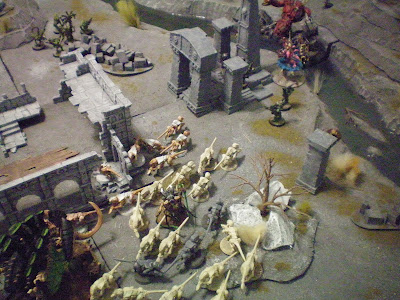 My next game was against deamons, he had two plaguebearer squads, a tzeetch herald, soulgrinder, and 3 flamers. The flamers made a crazy amount of 5+ saves, so I just tied him down with gaunts for the rest of the game. I had no way of dealing with the soulgrinder, and just made walls of gaunts so he couldn't move forward. I just couldn't manage to catch the jumping HQ, and he was able to contest, bringing it a draw with him claiming the bonuses (warlord, first blood) 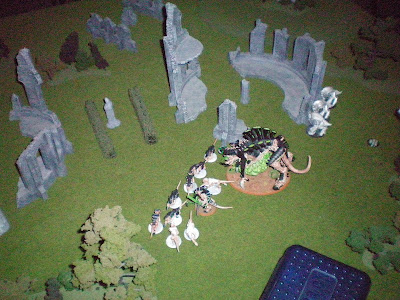 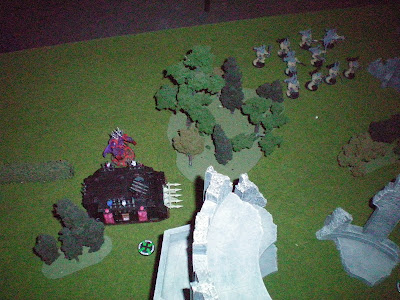 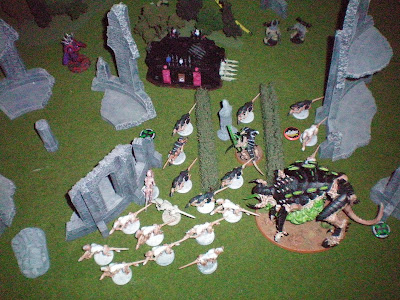 My next game was against chaos marines. A terminator lord, some bezerkers in a rhino and 10 marines with two melta guns. My biovores started causing casualties on the 10 man foot squad, and I practiced my "barrage sniping", taking out a melta gun and the champion early on. I multi assaulted the zerkers with the terv and Alpha warrior, challenging with the terv, allowing the warrior to kill the rest of the squad. His lord then came at my Prime with 12 attacks, and traded blows with his the victor. So I tied him up with gaunts till my tervigon could make it in and finish him off. 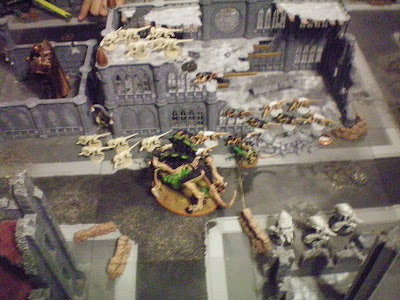 I had already played my limit for 500 points, but I played against a blood angel player so he could get his last game in. I spawned large amount of gaunts early on and moved up to hold the center objective in the ruins. He was running two 5 man assault squads, and a 5 man DC squad with reclusiarch. Counter attacking and charging gaunts (with terv buffs) started putting wounds on the squads as he got close. With out Sang priests to give FNP, marines started dropping and each casualty hurt. My prime finally jumped in against the DC and reclusiarch to help finish them off. They were a bit more than my gaunts could handle.

At 500 points, with the set objective missions, the only thing I could really do was just flood the center with gaunts, and try and pick the combats I could with my Prime. I knew I couldn't handle things like Tyrants or Soul grinders, so I just had to try and bog them down long enough each game. So 1-1-1 for the league so far, I'm interested in how things go at 750.

We have a lot of starting up Chaos marine players, so this should have an interesting turn out. I've always wanted to do a good escalation league like this and see how I can do at each point level.
posted by TheGraveMind at 4:33 PM