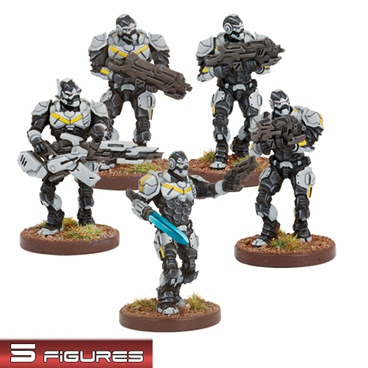 As most of you know, I'm heading up a group that's designing our own 28mm Sci-Fi wargame. As part of our testing, I want to have something different then we're all used to. A unit of Marine-Equivalents that's faster and less armored than a GW-style Astartes. So I decided to buy a few boxes of Mantic's Enforcer models to represent these. Their design has never really been my cup of tea, but they fit what I need. So what the heck, I'd see how good/bad they are compared to GW's products. 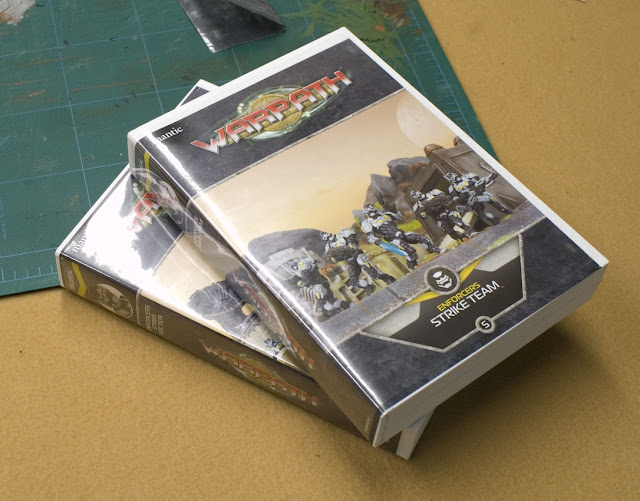 A box of 5 Tactical Marines from GW is running $25.00 these days. So it seems like a pretty good deal. But is it? 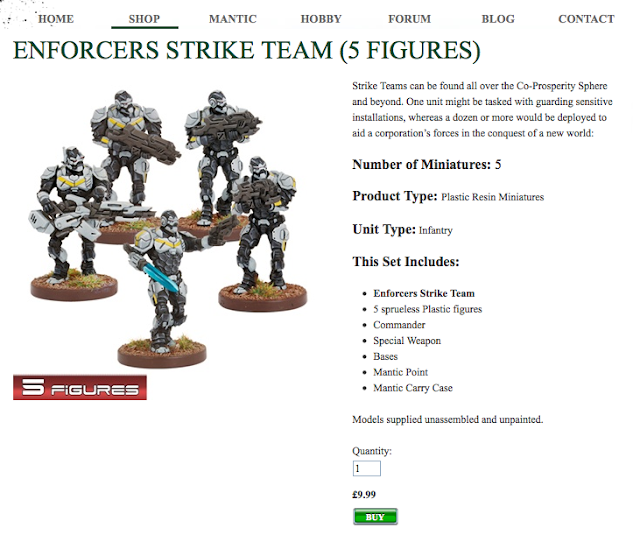 I really only needed 8-10 models to try out my game ideas. But I ended up buying 15 because I wasn't sure what the sets came with. I needed at least 8 rifles. The pic shows 3 guys with rifles, one with a 'Heavy Weapon', and one with a pistol & wrist blade. The back of the product box describes 'interchangeable components', but doesn't list what options you have.

When I actually opened up the boxes, I found that there were 4 rifles, 1 heavy weapon, and one pistol + blade option per squad. So I really didn't need that third squad after all. Wish that was better explained somewhere. Annoying. 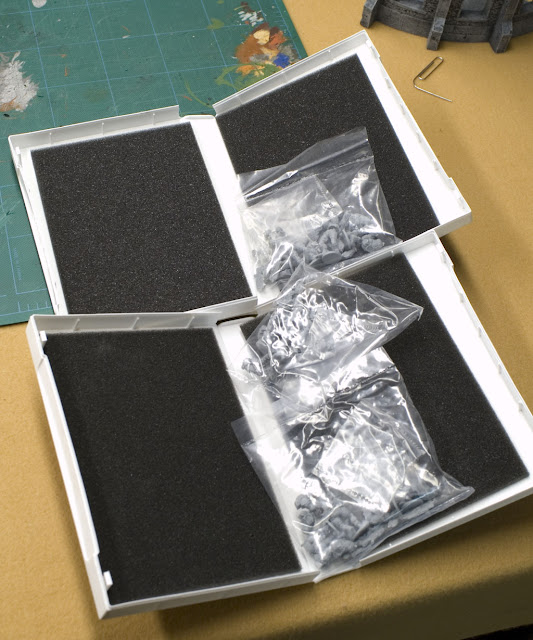 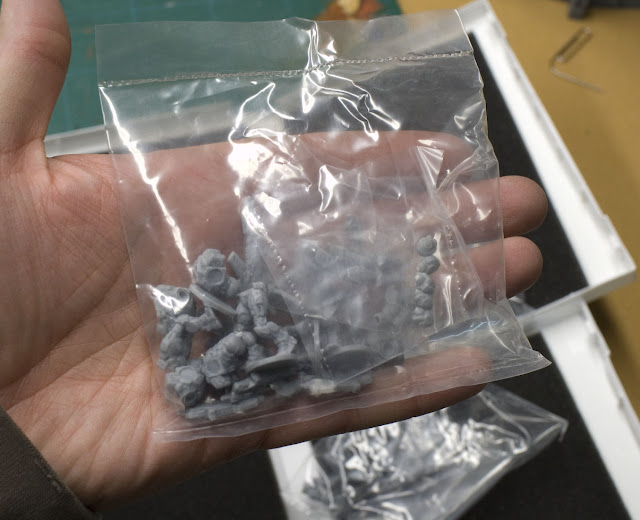 As you can see, the squad parts come sprue-less. In standardized poly-bags. I'm sure that saves on the warehousing costs. The clamshell cases are lined with foam. The idea being (I guess) that you would store your models in them, by squad, on a bookshelf. Which sounds very nice unless you don't like having your paint chipped as your models tumble around inside the cases. I know plenty of guys (like Farmpunk) that wouldn't care much about that. But to me it's a flaw. 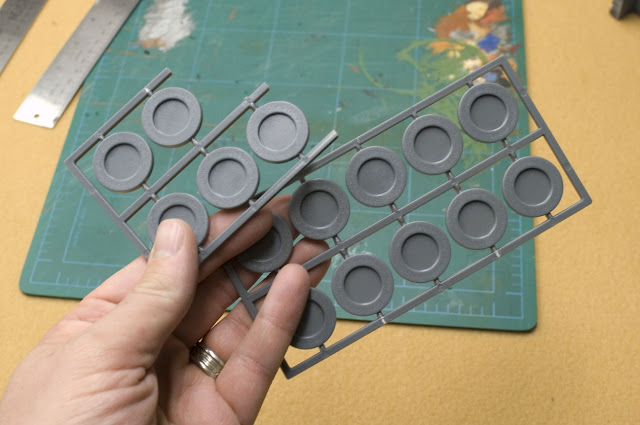 That's an interesting base design. 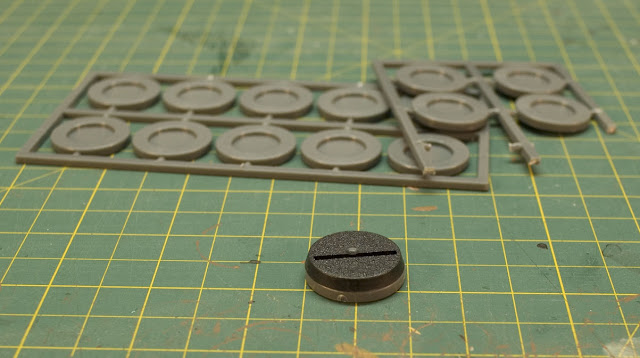 The bases are the same size and thickness as a 20mm GW base. But the sides don't slope, and the bottoms are solid instead of hollow. Since the bases are heavier, the models won't fall over as much when the surface they're standing on isn't flat (Good!). But they also won't grip a rough surface as well (Meh...). Any little bump on the table is going to make them wobble more than with a GW base. 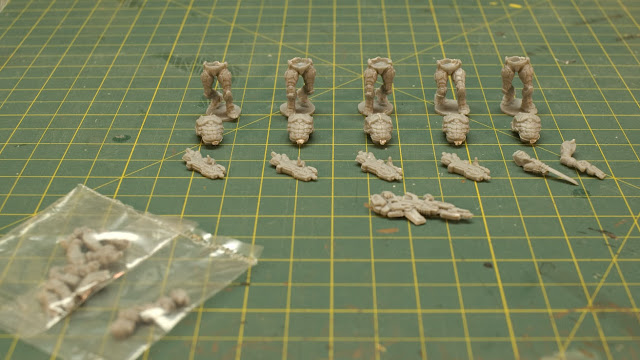 One nice touch is that the bags are layered. Open the first and the largest parts fall out. While the more fiddly arms and heads are bagged separately. Probably, this is because Mantic is reusing (or plans to) parts of these models for other lines. As they have with their Squat models that re-use their Fantasy dwarf legs (ick!). But intentional or not, I do like that I can get the legs and torsos glued down without having to keep track of all the smaller parts right away. 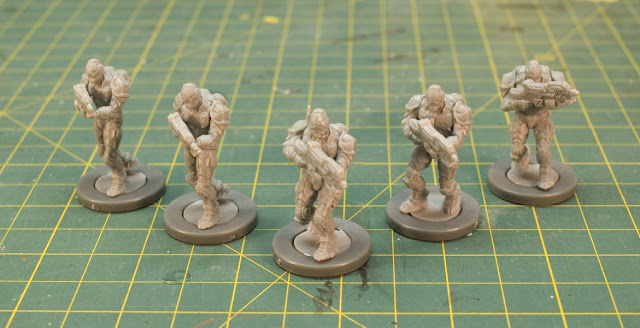 Flash wasn't much of an issue. Most of the mold lines were on the inside of the models' legs, where only picky modellers like myself would care. But whatever this resin formulation is, files don't work so well on it. I ended up having to cut and trim with an X-Acto knife instead. Which of course caused me to slice up my thumb. Since this plastic-resin is more difficult to cut through than straight plastic.

There were only 2 resin bubbles that I've found in the 10 models that I've opened up. one of those is easily fixable with Liquid Greenstuff, the other isn't. That's bad compared to plastic, but not so bad compared to metal or Finecrap. Given the cost, I can forgive those flaws.

But now we come to my biggest beef with these models.

These minis take FOREVER to put together. The five models you see here took 2 evenings to assemble. What? Yep. In the time it took me to put together 5 Enforcer models, I could have trimmed & assembled 10-20 GW Marine or Guard models. Or all of the cultist models in 2 Dark Vengeance sets.

Superglue just doesn't work. The joints don't fit together cleanly enough, the glue doesn't hold to the resin well, and even when the glue does finally hold, it snaps apart easily at the slightest squeeze.

Normal solvent-type plastic cement works with the resin these figs are made of, but not nearly as well as with a normal plastic kit. Whereas you can put some solvent-glue on a GW fig, press the parts together, and be pretty sure that it will hold, that doesn't work with this stuff. You have to clamp the part or hold it with some putty. Even then the parts will come apart again easily.

So in the end, I ended up having to use 2-part epoxy on these figs. Which is a royal pain, and VERY slow. I'm used to using epoxy on Forge World products. But even with Forge World's resin, you can use superglue on the smaller parts without any trouble.

The other big problem is the fitting together of the parts. The torso/leg connection is like a ball joint. But you can't pose it like a ball joint unless you trim away the armor in 3 places. Even then, you'll have gaps, and the whole upper torso is being held in place by the sides of the model's belt instead of the whole joint. 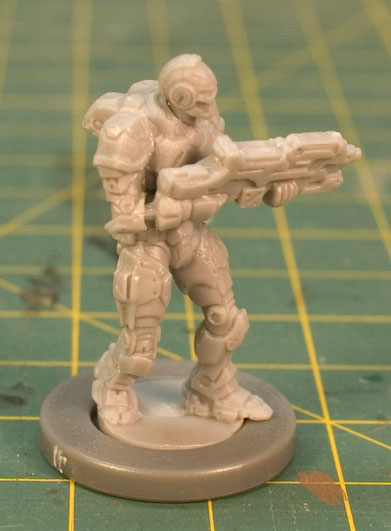 Then there's the arms.

I really don't know why the right arm isn't part of the rifle. It looks to me like it could be one piece, but it's 2 parts instead. So you have to epoxy-on the 2 arms before you can fit the rifle onto the arms ends. Which might or might not fit well. And while there's pegs on the arm/rifle joint, there's none on the arm/torso joint. In fact, there's a depression on the torso where the arm attaches, and no corresponding shape on the arms that matches it. So you have to use epoxy to fill in the difference. It's VERY annoying.

Design-wise, I like the general pose of the models. It's more natural than GW's Marine figs. But they're covered in a bunch of little abstract details that don't make sense or really look like anything. The mini looks like every generic sci-fi soldier I've ever seen. Going back to stuff like the old Star Frontiers RPG. It's bland. There are no sharp edges. It looks like someone sandpapered the edges off of everything interesting on the model.

They're also noticeably taller than a GW Marine (which is good). But of course so are quite a few 28mm Malifaux minis, like the one below.

And... Why all the parts? The models are 6 pieces for the basic trooper with a rifle. GW Marines are  7 pieces or so. But GW's figs can be posed different ways. These can't be. You can point the Enforcer's weapons up or down a bit, and twist the torso a few degrees, but you can't really change the pose up beyond that. Even the heads can't be turned.

So you have all the hassle of multi-pose models, in that you have all these parts to assemble. But you don't get the advantages of multi-pose. So why didn't Mantic just make these 2 or 3 piece snap-together plastic kits? Why go with resin and 'multi-pose' in the first place? The Dark Angel above is a 2-piece model from Dark Vengeance, and it looks a LOT more crisp. So does the metal Taelor model from Wyrd.

Unlike the Plastic Soldier Company products that I buy for Flames, which are much cheaper AND higher quality than the official Battlefront models, these Mantic minis are pretty disappointing. What you save in cash by buying them, you'll pay twice over in the time spent assembling them. Not good.

Which is disappointing. Since I'd like to see Mantic succeed. But this is their 4th or 5th line of products for Warpath, and I would expect them to have ironed out their design and production pipeline by now. However they're still putting out bland, generic products that HAVE to be sold cheap in order to be sold at all. Come on guys!

And maybe the problems that I'm having with this 'Plastic Resin' is why Wyrd decided to go full-plastic for Malifaux. 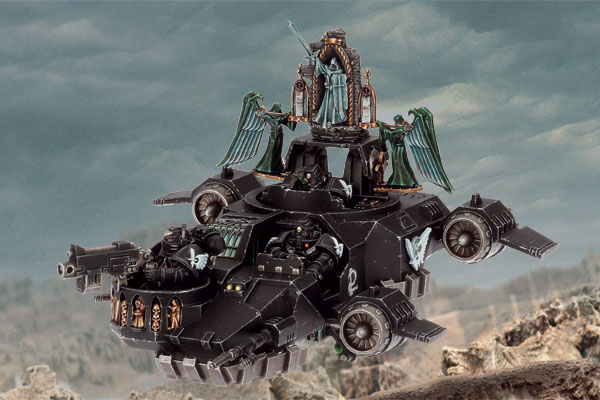 So as much as I dig on GW, I have to say that they are still tops when it comes to their manufacturing tech. I don't always like their designs, like that god-aweful shrine-speeder they just announced (above), but at least if you buy their (non-Finecrap) kits, they fit together decently. And even Finecrap has crisp detail and non-generic designs.
posted by SandWyrm at 8:17 PM