When the Tau codex first came out, I heard a lot of trash talk. But after playing some games with my tau (pics soon) and also against tau I can tell you they are here to stay. Considering their battle brother allies are going to be the two newest books out, Tau will have all the new shiny toys to play with. It has really made me consider the strengths of the Tau book.


Is the Codex really that good? or is it just good in this edition. Lets not fool ourselves and acknowledge that shooting has become that much stronger, and melee even weaker. 40k has always favored shooting more than melee, and this edition just tipped the balance a bit more.

If we look back before the new codex, we can see that in 6th, the old 4th edition Tau codex was actually doing decent. Tau do one thing, shoot, and shoot well. While they weren't top tier, they were still able to hold their own and didn't become unplayble when 6th edition came out. Add in the prospect of taking allies, and they were a solid army. The new book has given them the edge and he flexibly the old book missed. 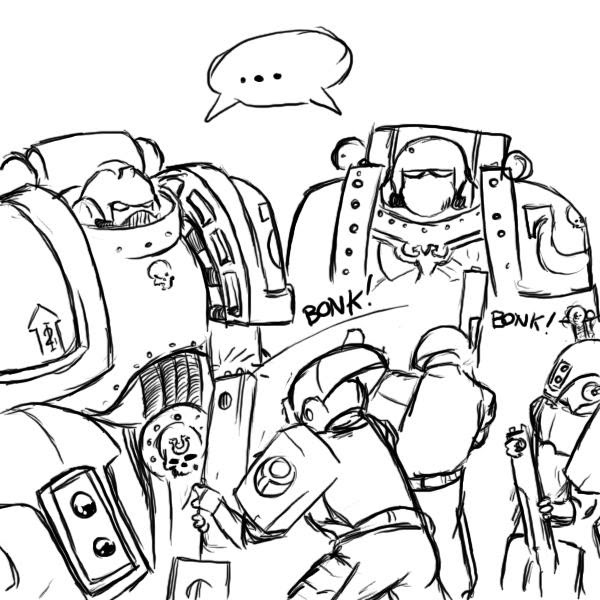 Tau's weakness is combat. Their defense against that is Supporting fire overwatch, which is in the codex. But it is dependent on the rules for overwatch, so when 7th changes that, who's to say how strong supporting fire will be.

6th edition has increased the number of USRs and expanded on a lot of such, but when the next edition changes, now that everything references to the rule book, they will all change with it. I guess I'm just thinking long term for my tau. I play my tau completely different than most people. Then again I am the Tau player who doesn't like battlesuits so meh.

The amount of small arms fire power they can put is astounding, and can really whittle away a unit fast. And they still have some amazing long range firepower. Though they lost some of the super range anti-heavy tank (aka losing the good S10 AP1 shots), but gained an unbelievable amount of light tank fire power.

The more I play, the more I enjoy the book. I'm not stomping people with Tau, but I'm doing consistently well, having fun, and pulling out hard fought wins. There is yet to be a true hard counter to my list, and it doesn't feel like rock paper scissors like my tyranids do. I still haven't tried out all the combinations I want to with them. I do wish Stealth suits had gotten better, as I have about 20 of the xv15 models.


What are everyone else's experience against or with tau? I know some local players were initially struggling until they got the hang of them. I've heard a few on the internet complaining about how tau are unbeatable and super OP.
posted by TheGraveMind at 3:38 PM