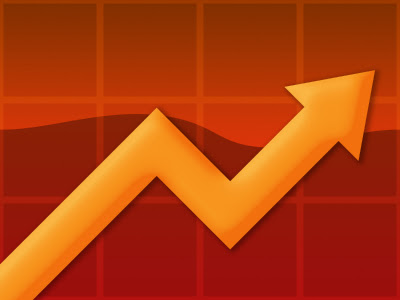 Let's start simple and try "Gamer". That's a good term for, well, folks who take the playing of games seriously as a pastime.

That looks like a nice gentle rise over time. Must be a growth market, eh? Well...

How about D&D, the grandaddy game of them all? 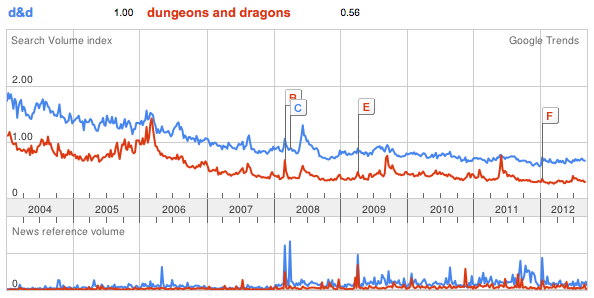 Well, more folks call it D&D than Dungeons And Dragons, but the 2 trend lines follow pretty closely. D&D has obviously seen better days in terms of interest, but at least it has leveled out it's plunge. 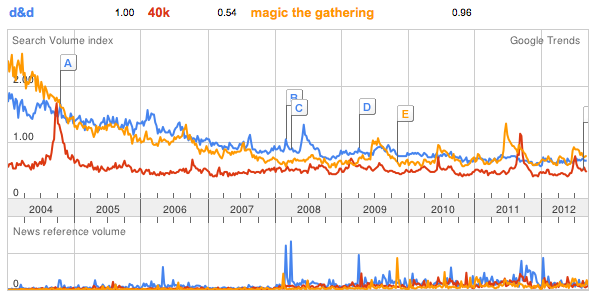 Magic The Gathering took quite a plunge too, to end up much as D&D has. Since both are now owned by the same company, this isn't too surprising really. By comparison, 40K just putts along relatively smoothly.

Warhammer Fantasy hasn't been so lucky. Having lost over 75% of it's popularity since late '04. It looks like the trend evened out a bit and even managed to gain slightly during 7th edition. But it's since lost about two-fifths of it's popularity under 8th edition!

Not that it matters much compared to 40K's overwhelming popularity. Why does GW spend so many resources on such a relatively unpopular game as WFB?

I guess it's big enough to matter. After all, Warmachine and Flames of War are in the same popularity range as WFB. In fact, both have surpassed it.

Colossals seem to have been good for Privateer lately. While Flames got an uptick after the new edition was released, fell some through the year, and is now rebounding. It's interesting, and confirms my own subjective impression of things. 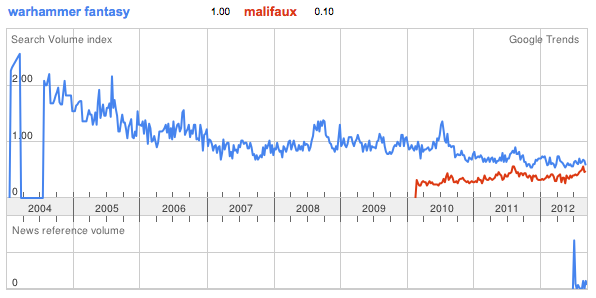 Malifaux is getting there too. Go Wyrd! 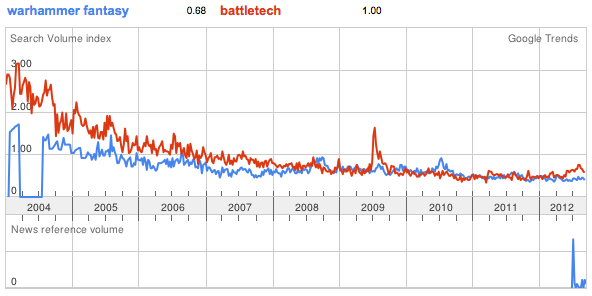 FASA may be dead, but Battletech is still a strong brand. It's even starting to surpass Fantasy again in interest after a big plunge. 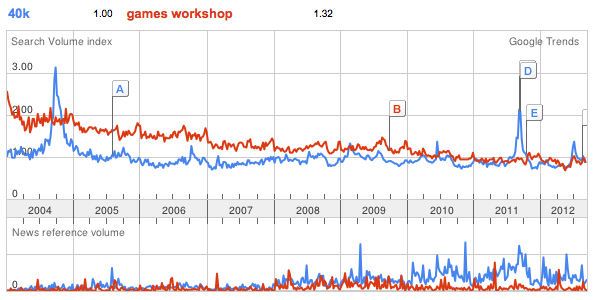 But back to 40K... It seems that GW's popularity has fallen by half since 2004. At this rate, they'll be near-zero in another 5-6 years. Not that they probably care, so long as we keep buying.

To be fair though, both Hasbro and Wizards have similar popularity problems. Though Hasbro gets some nice fat humps in during the holidays every year. Notice how those are getting progressively smaller? Interesting. 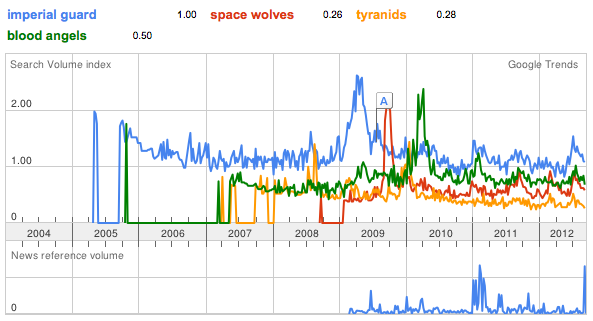 'Space Marines' is too general a search term to get meaningful codex results, but here's the graphs for the next four 5th Edition books. Notice the nice humps of popularity around each release. Well, except for Tyranids. If this translated at all to sales (and it probably did), it's no wonder that GW dragged it's feet in releasing later waves. From their standpoint, Nids were a huge sales disappointment. So they started ignoring them instead of helping them. 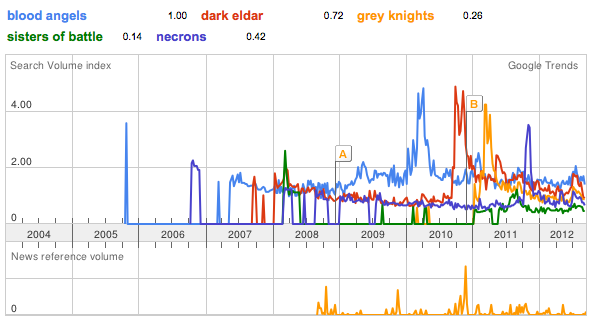 Leaving the Blood Angels in the list for reference, here's the rest of the 5th Edition books. No real popularity spike for the Sisters, but the White Dwarf PDF did revive them a bit. 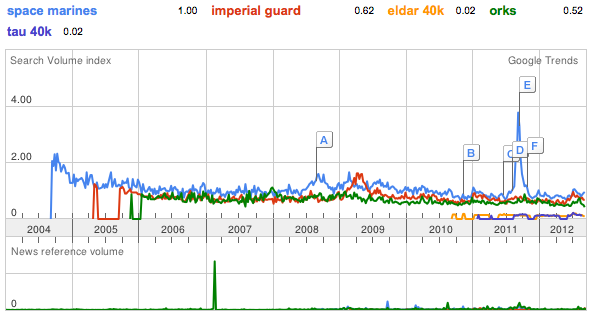 I've always heard that Space Marines, Guard, and Orks are the top 3 sellers. Here's the chart to prove it. Where are the Eldar & Tau, who would desperately like some updated books? Well, they're down there in the corner looking very unpopular.

Should the new Dark Vengeance box set have contained Eldar instead of Dark Angels? The popularity numbers say so. A local store owner has told me that he's worried about the long-term sales of the set, because the Dark Angels are too specific a design to be able to use the models for other chapters. There may be something to that, or not. We'll see. 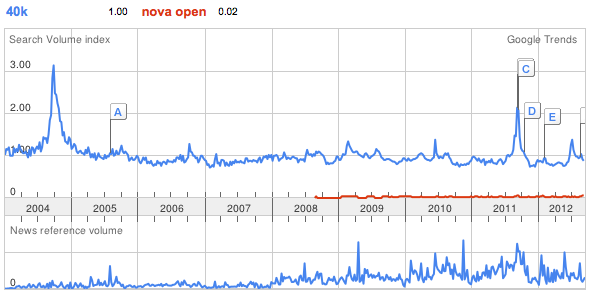 And finally, I thought that I would try and find some measure of the size of the hard-core competitive community compared to the bulk of 40K's adherents. We're that little red line at the bottom.

But, also look at the News reference volume. That activity from 2008 onwards is the rise of the blog community. Maybe that little red line has an effect on the popularity of the hobby as a whole, for both good and bad, out of all proportion to our numbers.

I certainly think so. Would 40K's numbers be higher or lower without us? GW probably thinks they would be higher. Which is why 6th Edition is designed the way it is. Specifically, I think, to discourage what they see as a noisy, impossible-to-please minority of their customers.

I like to think that we're propping them up. :)

EDIT: Just because all these wargames appear to be declining over time, that doesn't mean that everything is. Here's a real growth chart for ya... 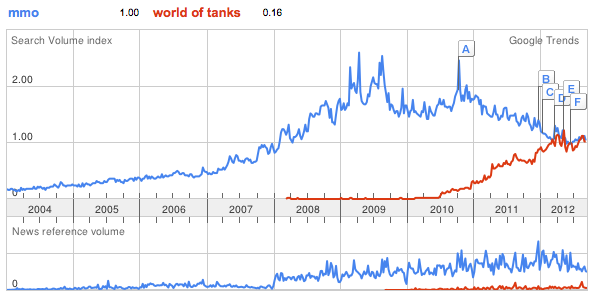 MMO's are declining a bit after a big surge of interest, but oh man! Look at World of Tanks!

Apple and Microsoft have crossed in a very short period of time. 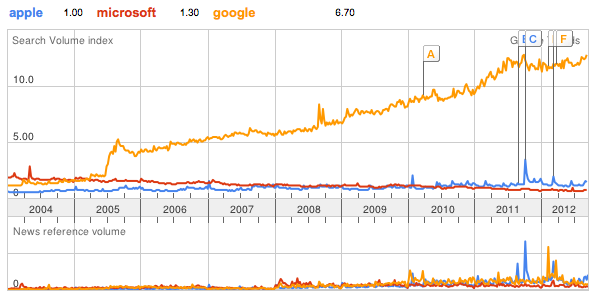 Though Google rules all! :)