Marines in 6th Trial and Error

When 6th edition hit I tried a few games with my Blood angels and couldn't seem to get them to work right. Razorback spam wasn't working the same with the limitations on assaulting from vehicles and hull points. My jumpers list didn't like the furious charge, FNP and reserve changes either. The jumpers were always the list I liked the most, so I was determined to make it work. With the prevalence of more infantry based lists, I was sure I could find something.

The first thing I changed was replacing most of my meltas with flamers, to deal with more infantry. With krak grenades and furious charge, I was confident I could take down some vehicles in combat. I still had my devastator squads with missiles to take on vehicles. After a few test games, I was still hitting hard, and crushing things once I got there, but with the nerf to FNP (and yes I still say it's a nerf), and the limitation on reserves, I was having less making it to end game. 40k has shifted so hard away from combat to shooting it isn't even funny some days. (Games like Hammer and Anvil against a shooty Dark eldar list for example.) 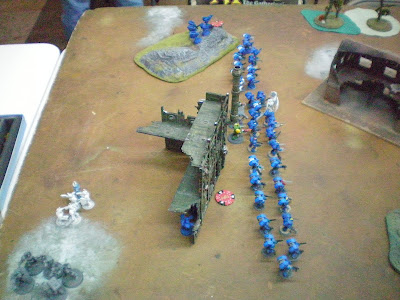 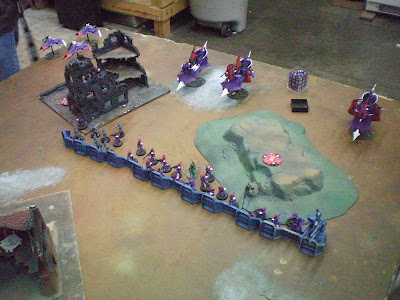 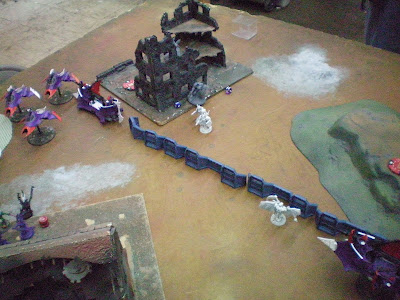 My first idea was to use Dante, take some Sang guard as troops and use their 2+ to pull some weight. But until I could get those models I needed an alternative. Enter my terminators. The classic ally option of Belial and 2 scoring terminator troops. They work wonders, soaking up tons of fire power. One squad (with Belial) can deep strike in, get side shots and be set up to assault next turn.

I kept the meltaguns mostly because I didn't have enough flamer arms magnetized for my marines. turned out a good thing as my first opponent was Imperial Guard with tanks. Two lemun russ's, colossus, vets in chimera, a blob with heavy weapons, and ogryn. 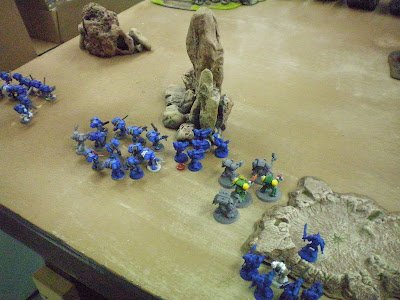 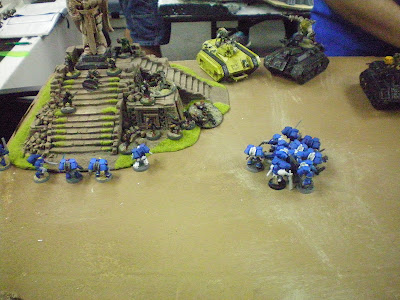 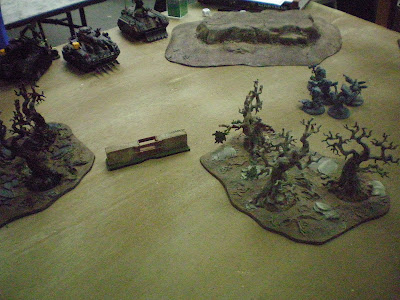 Kill points with pitched battle, I basically hid for two turns trying not to die to large blasts. We went into turn 3 with 1-0 my lead, having me a bit concerned.  But once I hit his line, I started killing chimeras, so the game ended like 6-1, and I had first blood and line breaker.

Game two; against new and improved demons with 5 objectives. Heavy's are scoring, making every unit in my army scoring. 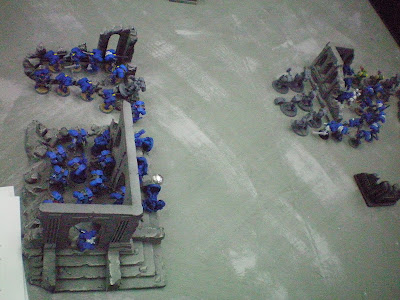 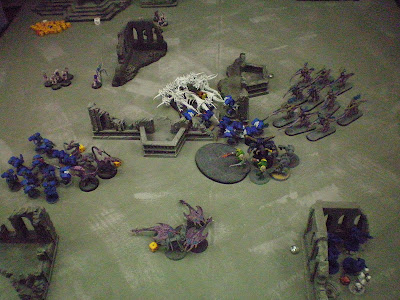 I deployed in terrain, ready to shoot and assault anything that got too close. Fateweaver, fiends and flamers landed in front of me, a chariot behind them, and some horrors in the back. I shot and assaulted flamers, holding them in combat for the rest of the game, and killed some fiends in shooting. With some a lot of luck, Fateweaver was out after his first wound, I over-watched a melta into an assaulting chariot, and grounded a demon prince, assaulting with terminators for the kill. I managed to somehow hold combats for longer than I should have, and ended up holding 3-1 when time was called, with both heavies alive, and killing all three of his.

Game three pitted me against my Nemesis, who had ridden with me to the tourney. We got the Scouring, with diagonal deployment. I knew I was in for a tough fight. While I can normally hold my own and give him a good run, most the times he pulls out the win. 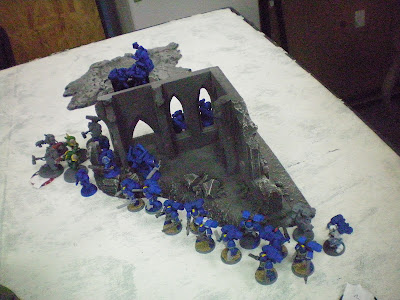 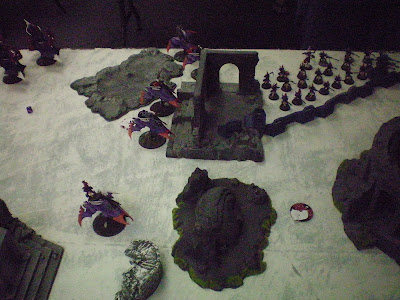 I decide to hold back both melta squads, and belial's squad to deep strike in later. Revealing the objectives I have 4, and 3 in my deployment, He has 1 and 2. The other 2 is in front of him, and the other 3 is off in no man's land to the side. First turn shooting he widdles down one side of my assault squad to expose my priest and starts putting Dark lance shots into him. I decide to Los it, but have to take it on my reclusiarch. I fail the invulnerable and he dies. The squad loses fearless, makes a moral test, fails, runs 16" off the board. There goes First blood, Slay warlord, and 450 points of my army. Not looking good.

With both 3's in the open and far out of his way, I keep my terminators on my 4, and figure I'll force him to take all three of his objectives, and try and keep him busy. I keep deep striking into his back field, Belial and terminators take most of his shooting, and devs drop a venom or two limiting mobility. Two assault squads come in, kill another venom or two, and start dying to splinter and blaster fire. Four guys survive to assault and contest an objective, Giving me line breaker and a minor victory. I won mostly due to luck of the objectives, but a bit of skill at playing the mission.

Over all I'm pleased with how my Jump list performed. I still think it could do better, and the terminators would be more efficient as Sang guard once I get the models. Any body else tried allying Deathwing? They do a pretty good job at pulling fire and Terminators are pretty hot right now, but everyone is leaning towards more plasma now. I also learned I need to work on my deepstrike formation, meltaguns don't need to lead anymore or they die.
posted by TheGraveMind at 12:17 PM