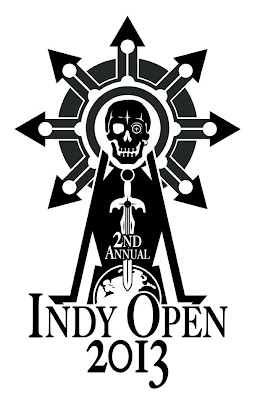 Yes, It's that time of the year again, and we've got something in the works...


and not something for Día de los Muertos.


We are happy to announce that The Indy Open (a Warhammer 40K Grand Tournament) will be held in Indianapolis, on March 2nd-3rd 2013!
We will have a 1750 point 64-man, 6 round win/loss Grand Tournament, with Separate prizes for the best Painted army, Best General, and Renaissance Man (best combined Paint and Generalship).
There is a three color painting minimum for the Indy Open tournament.

Best General and Renaissance Man will receive invitations to the Nova Invitational Tournament  and a $250 Visa Gift Card!!


The  format will be a Win-loss style (like NOVA Open) utilizing Adepticon primer missions and Adepticon set up.  There will be prizes for the top person in each of the W/L brackets (3-1, 2-2, 1-3, 0-4) after round 4, as well as other door prizes totaling more than $2000.

On Saturday, March 2nd we will have 4 games, followed by two games on Sunday for the final 8 in the championship round, or 7 other tournament events.

Registration fees will be as follows:
$50 Pre-registration (Nov. 1st through Dec 31st)
(The first 24 pre-registered players will be put in drawings for 5 prizes to include Adepticon badges, 40k prizes, and even a Warhammer 40k battleforce)
$55 Early Registration (Jan. 1st through Feb. 24th)
$60 At the Door Registration (if slots are available)
$10 2nd Day Events  Any second day event if not registered for the Grand Tournament. (Except the Championships){Free with GT registration}
$ 5 Non tournament Badge Allow anyone not playing in any paid event to participate in demo games, open miniature gaming, free tournaments, utilizing the board gaming library, browse vendor hall, etc.
There will also be non-miniature wargaming available starting March 2nd in a separate room of the hotel to include: 2 Magic the Gathering tournaments, Warhammer Invasion, Star Wars X-Wing, Netrunner, Board Gaming, ETC.     (See non-miniature wargaming page)


We've got a lot of stuff going this year! Start pre-registering, and we hope to see you there!