OK, so it has been flaring all across the blogs, and I've been addressing it long before, so I wanted to bring it up here. I have two core rules I feel are being brought up and challenged. It all really started when tau came out, but with eldar now has come to full volume.


Infiltrating ICs.  (please read though, and give your comments, I'm looking for all insight)

Basically, people want to attach an IC who has infiltrate to a unit, which would then confer infiltrate to the unit, and allow them to infiltrate. The argument comes up that under joining a squad with an IC, it says there are only two ways, deploying within coherency, and in reserves. Unfortunetly neither of these covers infiltrating.
Infiltrating is not reserves, but the unit doesn't gain the benefit until they are deployed, and thus can't use infiltrate because it is a type of deployment.

And here is where it becomes gray. If anyone tells you it is simple RAW, then they are probably wrong. 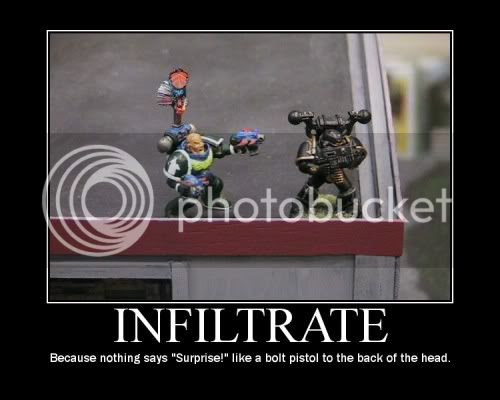 1. Under dedicated transport rules, it refers to a unit joining the squad before deploying. This actually allows a unit with an infiltrating charcter to infiltrate per RAW, as long as they are in their dedicated transport. But this rule does two things. It refers to joining a unit before deployment, and also breaks he above rule that there are only two ways to join an IC.

2. Shrikes entry in the FAQ (it's an amendment). What it says with slight paraphrasing "shrike and any model in a unit chosen from codex space marines that he has joined before deployment benefit from infiltrate".
No where does he have a rule that allows him to join a unit before deployment, though most people keep on saying he does. You cannot nit pick one rule, and then breeze over another part. His ruling simply says that the unit he joins gains infiltrate. Why is this important? Because it is a 5th ed ruling that was never changed and assumed the 5th ed FAQ that ICs joined before deployment. 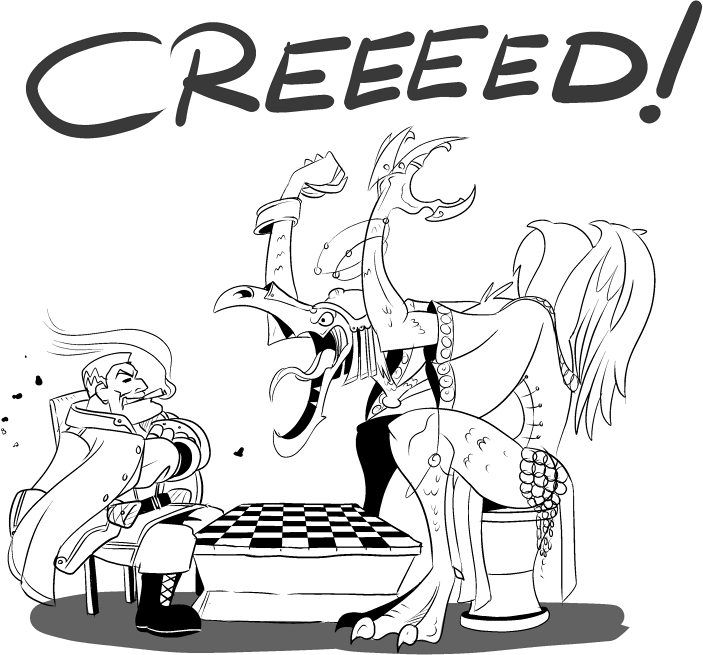 So now we have a rule that states the limits on joining ICs to a unit, and then we have other rules that break the first rule, and references to joining before deployment. So while I'd be fine with either ruling at a tournament, I don't believe there is a simple absolute ruling yet. Though if I were to bet, I'd say to watch out, as joining before deployment used to be the norm.

This first came up when people noticed that multi-trackers now said they function in the shooting phase. Then people were like, at least the riptide is an MC and can still overwatch with both weapons. Oh wait, the rules for MCs also changed this edition to shooting phase, and no one noticed. Well that is a huge limitation on overwatch then. 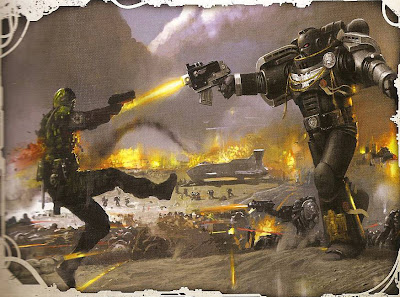 Well why do we have those rules? Because you can only shoot one weapon normally duh. Lets check.... Under the weapon section in the rule book. "He must choose which one to shoot- He cannot fire both in the same Shooting phase." Emphasis mine. Wait what! O.O  the limit to shooting only one weapon only applies to the shooting phase as well?

Flip back to overwatch rules. "-but let fly every weapon at their command."  If this edition is all about narrative, then a marine firing his bolter and a bolt pistol at a charging enemy seems very dynamic and theatrical to me. 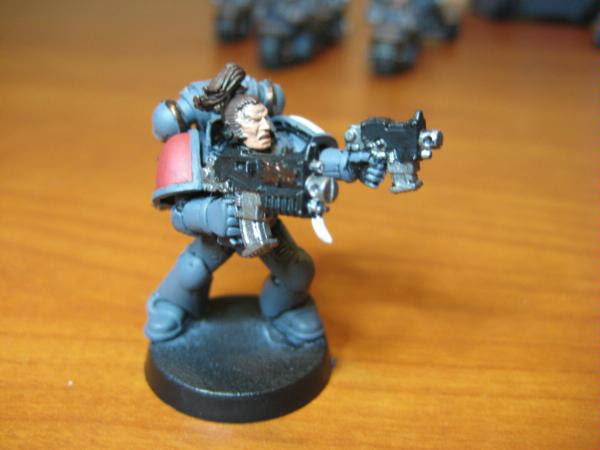 So it seems we can either let tau and MCs over watch with two guns, or follow RAW in the strictest sense and let tau over watch with 3 guns each :\ That seems like a win/win.

So I ask how TOs are going to handle these? I've talked to a few, and most seem to be accepting of the Infiltrating squad, and When I point out rules about overwatch, they say let them shoot two weapons, as overwatch is supposed to follow the rules of shooting anyway.

So how do you rank in? How does the logic of your argument work? I'm interested in as many perspectives. I suggest we send these to Gamefaqs@gwplc.com and they may hopefully address these issues.
posted by TheGraveMind at 9:05 PM