Battle of the Bugs 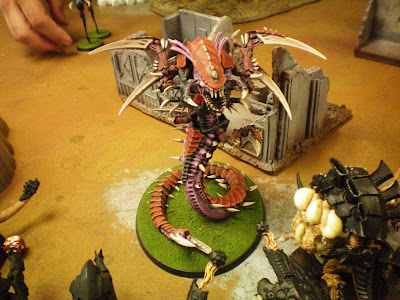 After Two wins and a Draw in the Indy40k Tournament, I was placed in second going into the third round. For a quick review, check out the past three games Here. So as stated, after three games I was going into the Fourth round at second place. I had been saying I was looking forward to facing one of the other Tyranid players. I can generally do well against other tyranids, and it looked like my list could handle what the other players had brought. Well, things aren't always what them seem.

Now Carlos is also the guy who made the missions and ran the 500 point tournament I had attended a week or two before this tournament. I typed those missions here, and they are well made. He has been playing Tyranids for a long time and has many other armies. I knew I was going to be in for a tough fight. 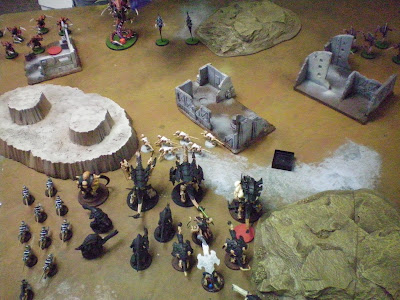 It was Pitched battle with one objective each. Primary objective is to control your opponents objective. Secondary objective was to hold your own. Tertiary objective was to have more units in your enemies deployment zone. I deployed first, making a gaunt wall in front and to the side for when his genestealers outflanked. The gaunts would screen the charges, followed by the tyrannofexes for the heavy hitting. My heavy hitting was huddled behind them. My goal was to take my troop tervigon on the left and run him over the hill to fight on his objective, though I never really made it that far.

He deployed with his large unit of warriors and prime on the objective, the Trygon prime and Zoanthropes directly in front of me, and the squad of raveners off to the side. The choke point between us gave him  the large tactical advantage with his trygon, as I could not bring my numbers to full potential. 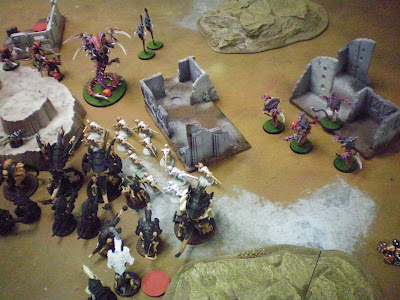 First turn everything moved up and I shot some heavy weapons at the Trygon. I put a single wound on him. Not bad for not having any good AP weapons. I realize now I was pumping too many shots into the warriors and raveners early on. My hive guard destroyed them, but at the price of not killing the trygon. Ignoring armor and instant killing them were just to tempting early on. Hind sight 20/20. A good roll on his part lets him regenerate that wound on his Trygon back. Proves vital later on.

Rage takes over his raveners and they just run straight at my tervigon. The Trygon moves up and fires into my gaunts. He moves his warriors up, trailing some behind in cover while taking shots from my hive guard and losing numbers fast. 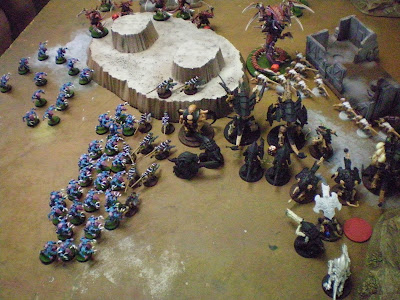 On my turn I shoot some more, dwindle some numbers, make more gaunts and pretty much brace for the large assault that is going to happen with raveners and trygon hitting my flanks.
On His turn two, he rolls for his reserves and all three of his twelve man genestealers come on, and all come on to the side I'm on. I wish I had a quarter of that luck when I outflank. Luckly I had planned for some genestealers to come in and had kept my side gaunt wall in place. So the trygon assaults my gaunts, two of the three squads of stealers assault my other guants, and raveners go for my right side tervigon. 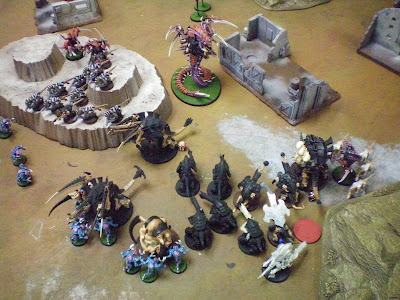 This picture shows end of my turn three. That's how much of his I've killed. I spawned some gaunts who shot some genestealers to death. The two tyrannofexes crumpled two other squads down to three stealers each. I then assaulted with the big guys to finish off the last few. My prime took on the Trygon, and failed to roll a 5 to wound which would have given me a chance to use my bonesword. Another mistake on my part, if I had kept my prime safe for another turn, and combined him with my other MCs, giving them a chance to attack, I would have killed the trygon. So I continued shooting, assaulting, and generally fighting for my life. 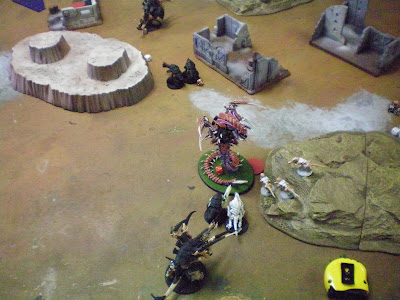 In an attempt to stop the Trygon, I assaulted with two tervigons and one tyrannofex. The other tyrannofex and two hive guard made up towards his area to kill the last Warrior and the Zoanthropes who had been making pot shots. Unknown to me, you can split your attacks from one model in combat, so half of his attacks when to each of the tervigons. Both of them had a few wounds dealt to them early on from stealers and raveners. This killed off both of them with some good rolling on his part, saving his Tyrgon yet again. I had managed to bring it down to one wound before all of this, so if it wasn't for that regeneration roll earlier on it would be dead and I would have won. So both tervigons die, my tyrannofex flees from loosing combat, and has no synapse. On his turn he assaults my hive guard and last few gaunts. To ad insult to injury, he makes something like 2 or 3 of his five regen rolls. My tyrannofex runs off the table and my other one either sits there or rages back towards the Trygon.

After the game we talk about it, and make the conclusion that his Trygon killed somewhere around 1,200 points of my 1,500 list. The game ends with his trygon on my objective, and I have a tyrannofex and two hive guard in the middle of the board. We had practically tabled each other, and fail at primary, and secondary objectives. He managed to pull off tertiary objective, while my models are twiddling their claws right outside of his deployment zone.

So Victory goes to Carlos and his Nids, keeping him in first place. I still win Second place prize, as I went into the last round in the top, but after that game I dropped to something like 5th or 6th place. Overall a good game and a great Tournament, though sadly bringing the first time I've lost to Tyranids with my own bugs. My two tactical errors on killing that Trygon cost me. But we learn, we adapt and we put toxin sacs on more models ;)
posted by TheGraveMind at 4:21 PM