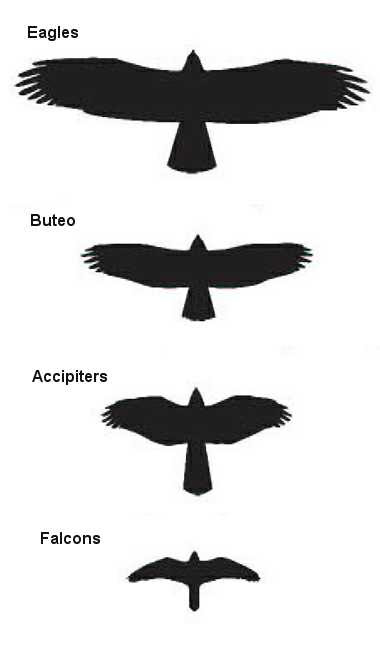 So, Sandwyrm's Emo-wing BA army has made me decide to reveal my jump infantry as well. I've been working on these guys for a couple of months now. They are one of my many side projects. They started off as my Chaos Raptors, then the BA came out, and they got an even better calling. They fit my Draconic theme for my army, and will appear much more sinister than the Descending angels. They are the Yin to the Sanguinor Yang. 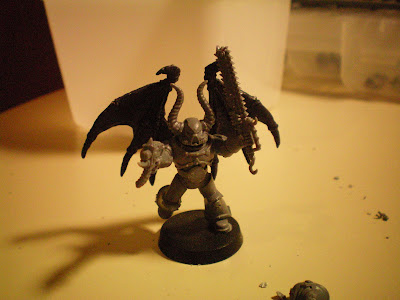 This is my ABAFF, Anti-Blood-Angel-Fighting-Force. I have one finished, and the rest are only a few days from being finished. The wings are old metal wings from 2nd edition Tyranid Gargoyles. The trick is to get the wings to stay, and balanced, since they are metal. I have around 10-15 wings in various conditions from ebay. 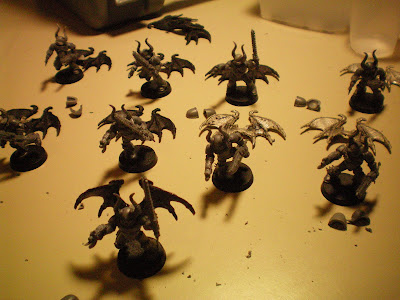 Above are nine that I have ready to work on. I'm still having to figure out how I'm going to work out the last few. I've also worked on a five man Vangaurd squad. These are maybe a little out of place right now, but I'm hoping I can make them look ok. 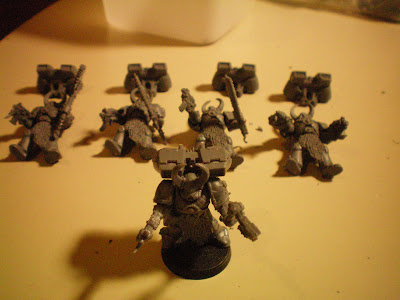 Yes, those are Space wolf pelt legs, and with the horned heads, they have a very barbaric look to them. I'm going more for the Geat/Germanic tribe look, than the Space Viking. Right now it is just  five men, sarge with a powerfist. They are there to deepstrike in, and assault that turn, hopefully punching rear armor or a soft squad. Again I have one done from the squad to see what they look like. 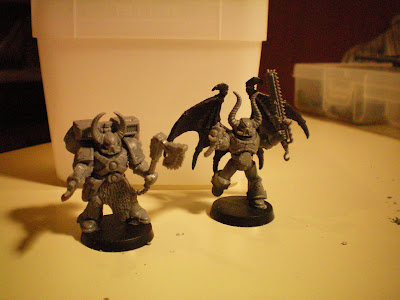 So there they are, my jump infantry. Oh yes, there is one more surprise, Magnets. 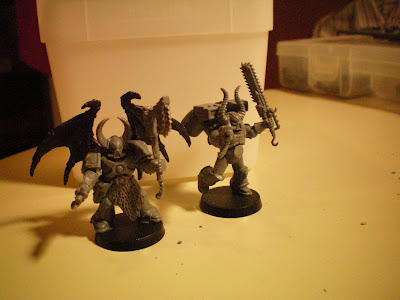 Tada! I've magnetized the wings and Jump-packs. They can be detached or switched around. If I want to show off my vangaurd and make them look more intimidating, then they get the wings. Also the Vangaurd's arms are magnetized, so I can use them as normal jump infantry or equip them to be hard hitters.

As I've said, I'm building a Mech BA list at the moment. These are fun accessories that I'll finish after my tanks, and will add to the list for funnzies. I'm getting pretty decent at attaching those magnets, so I hope it won't take that long to finish them. Maybe someday soon I'll have them face against Sandwyrm's yet unnamed BA squads (see poll to help name them).

Who do you thing looks better with the Wings? Vanguard or Assault marines?
posted by TheGraveMind at 1:41 AM