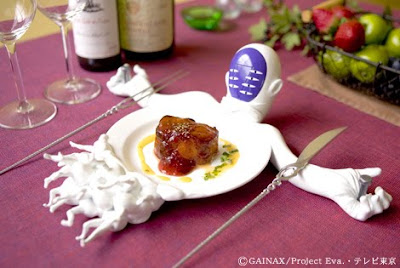 It's game two for the Angels, this time versus a Genestealer-heavy Nid build.

Pretty much the same as last time. I just swapped the Chapter Banner that had put me at 2015 points for a power weapon on one of the Sanguinary Priests.

I'll dub my opponent BroodDude, in honor of his Genestealer-heavy list.

Deployment
We rolled up an Annihilation mission with a Dawn of War deployment. I won first turn, but decided to make BroodDude go first to see what he'd do. 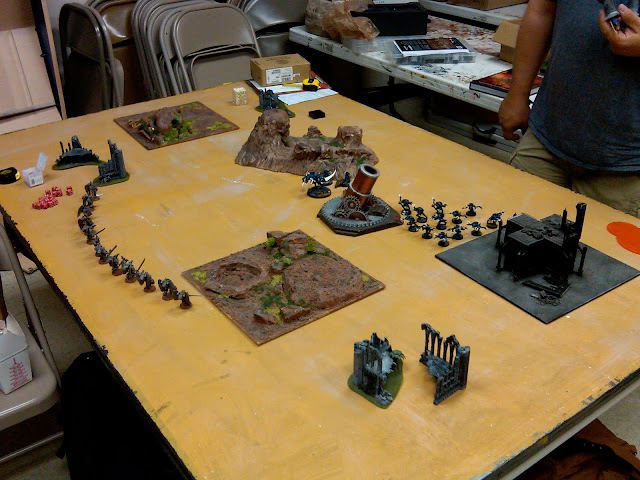 He set up his Swarmlord + Tyrant Guards in the middle of the table, with a unit of Stealers to his left. The Zoeys would roll on turn 2, and his other 3 Genestealer squads would outflank. The Trygon was deep-striking, while Deathleaper would do his thing.

In retrospect, I'm not sure if the Tyrant Guards could have deployed, since they would be another HQ unit, and the mission only allows 1 HQ and 2 Troops to be deployed.

In return, I set up Mephiston + a Sanguinary Priest exactly 19" away from the Swarmlord, with a unit of Sanguinary Guard on either side. Dante would deep-strike, while the other 2 SG units and the speeders would roll on during the first turn.

I don't think that putting the Sang Priest out was legal either, but at least there was symmetry to our mistakes. :) 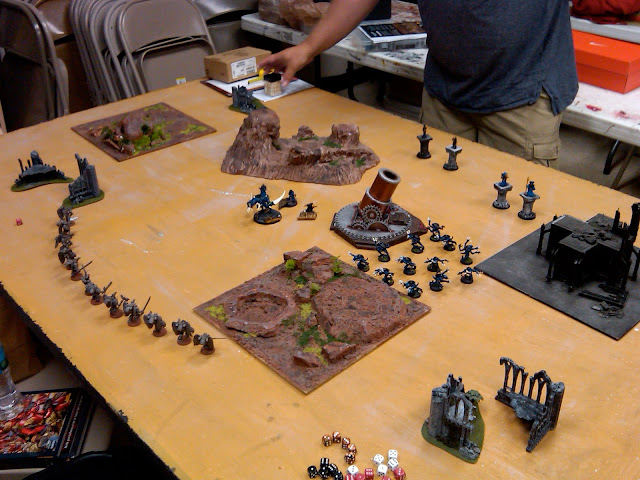 The Swarmlord and his guards moved up, running just one inch. It didn't matter though, as I only needed him to move 1" to let me jump on him during my turn.

The Genestealers moved up too, with the Zoeys coming onto the board to form a firing line in BroodDude's deployment zone. They're too far away to do anything this turn though. 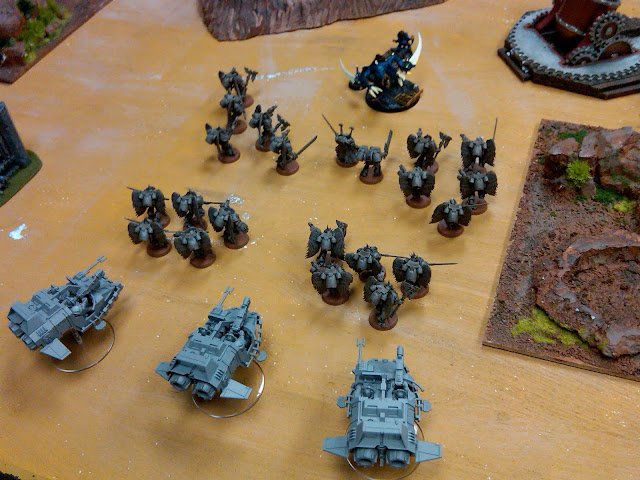 When my turn comes, I move Mephiston (with attached Priest) and the 2 SG squads up to within 6" of the Swarmlord and open up with my Infernus Pistols and Angelus Bolters, plus Mephiston's Plasma Pistol and the Multi-Meltas on the Speeders. I kill 2 of the Tyrant Guards, put a wound on the the remaining guard and one on the Swarmlord. 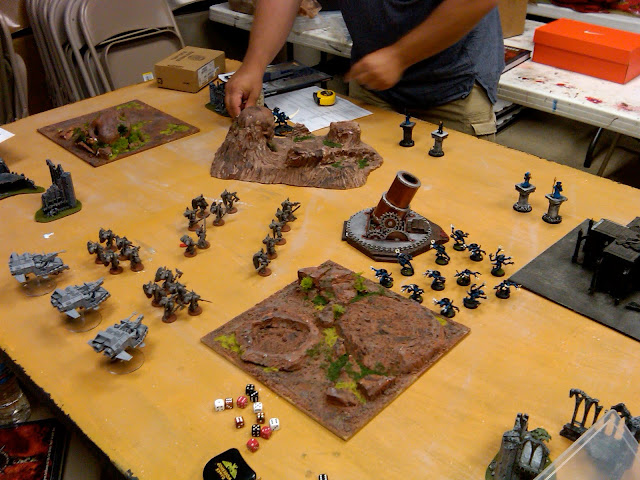 I then swarm the Swarmlord and take him down, losing one SG in the process. One SG squad consolidates into a line to protect me from the nearby Stealers, while Mephiston and the rest hang back a bit.

My plan, BTW, is to keep my relatively small force in the middle of the table so that the outflanking Stealers will have to spend a couple of turns getting to me. The Speeders are ready to zoom up in their faces and block their movement so that I can control how many get to me at once. 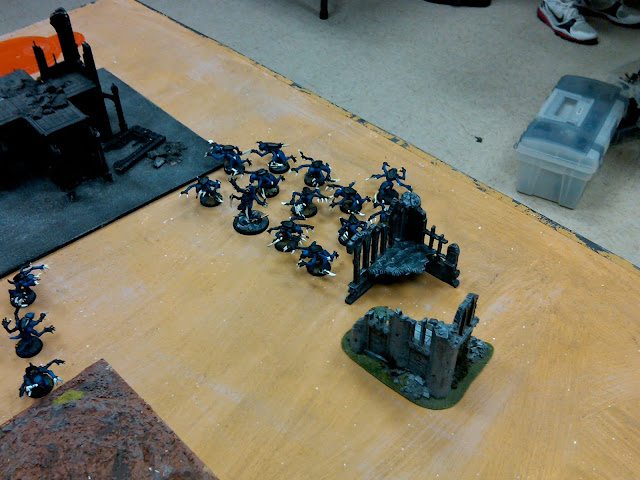 BroodDude rolls pretty lousy for reserves. Only one unit of Stealers comes on. The enter on my right behind their kin. 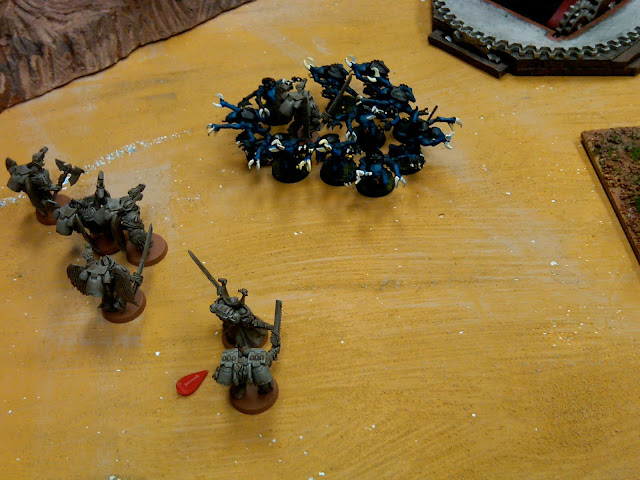 My blocking squad get assaulted by the nearer Stealers and BroodDude gets 3 rends. The other model failed a normal save. The last man stays salty though. Man, I can't afford to trade units like this! 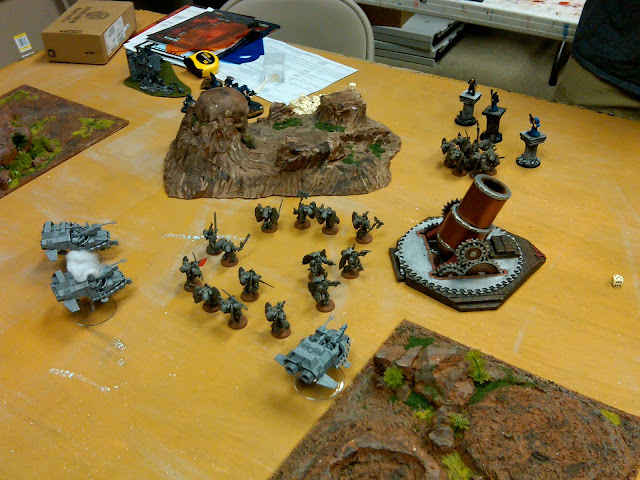 On my turn I assault those Stealers and wipe them out, losing 3 SGs (including the sole survivor) in the process. The Speeders move up (smoke means he moved over 12") and shoot at the Zoeys. Dante drops in and lights up the Zoeys too, but only one dies. 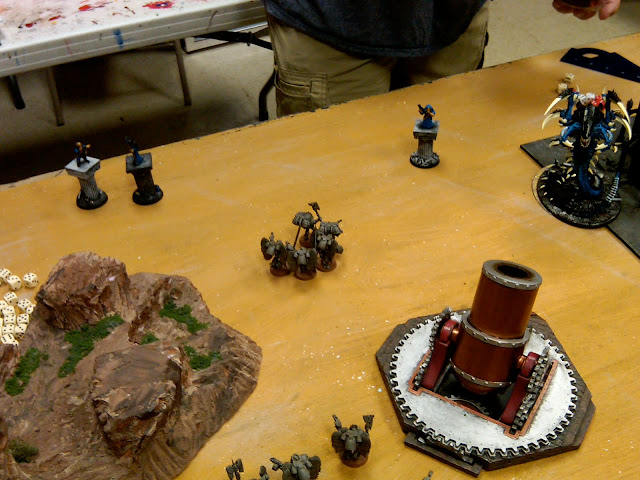 Mr. Trygon shows up. He and the Zoeys then light up Dante's squad, killing 2 SGs. This is the same Trygon model, BTW, that showed up on the BoLS pic of the day last week. 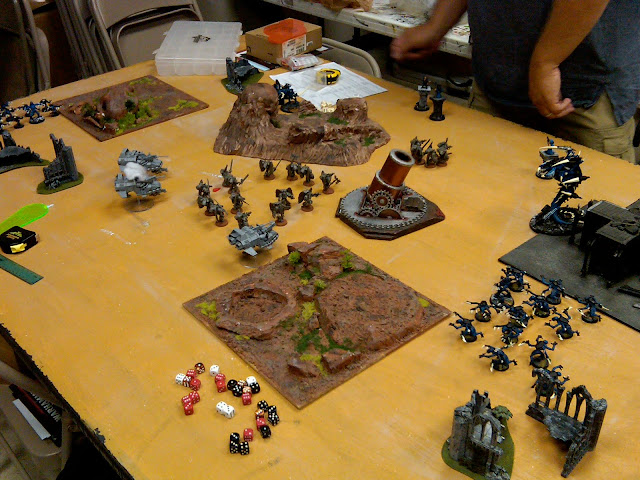 Stealers move up. BroodDude's other 2 Stealer units come on to my far left. 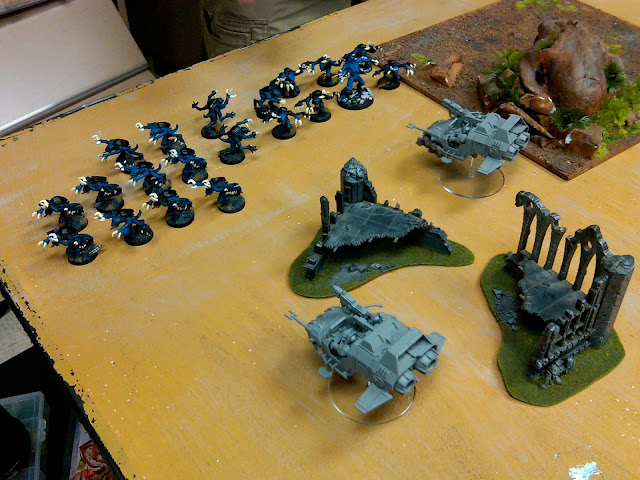 On my turn, I move 2 speeders up 12" towards the Stealers on my left and flame away 2 from the left squad and 3 from the right squad. 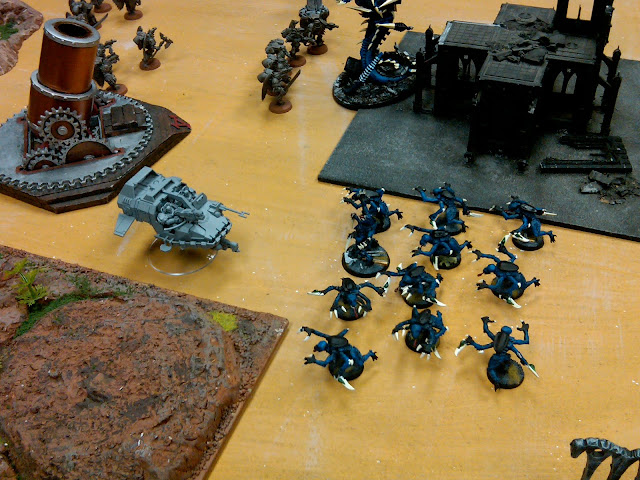 The Speeder I zoom up on the right kills just one bug. 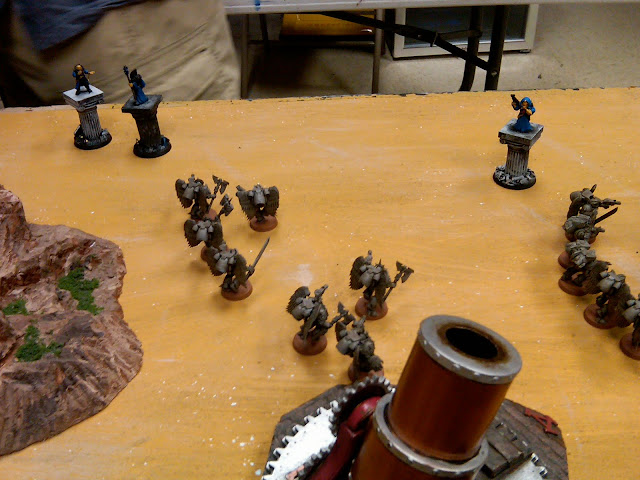 I move 2 Squads of SGs towards the Zoeys. None die to shooting.

Now here's where I made a nasty mistake: 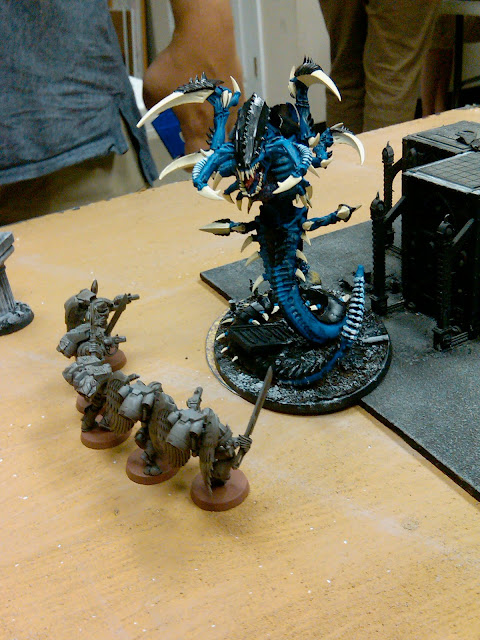 Dante moves up to shoot and assault the Trygon. By himself.

Now, before you start laughing at me, realize that I went into this with a Guard mindset. To the Tallarn 13th Armored Company, Trygons are just a minor nuisance. They pop up, plink some shots against my armor and then they die to meltas and lascannons. At most, I'll lose a 55 point Chimera before I finish him off with shooting.

But of course I'm not playing Guard here. :)

So Dante shoots his squad, but doesn't cause a wound. He then assaults, but the Trygon has a higher initiative (Or so we thought, it was only 4. My guys were 5 on the charge. Yay for stupid mistakes.). 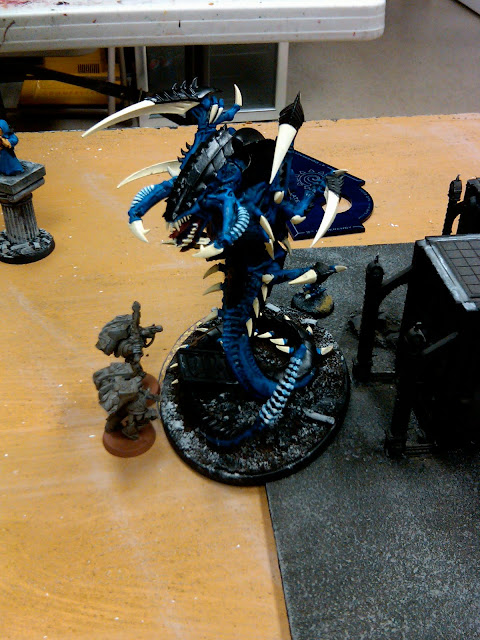 Dante loses his angel escort. While doing only one wound in return. I realize later that I should have killed the Priest and kept the SG with the power fist. Oh well. At least they stay put. 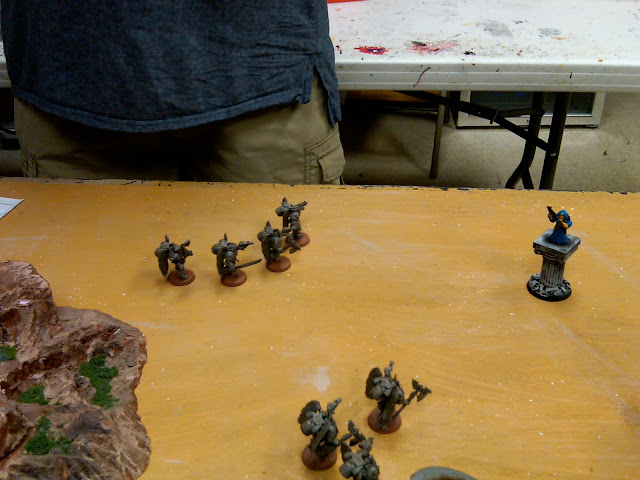 On the far end of the table, an SG squad kills the left-hand Zoey unit. 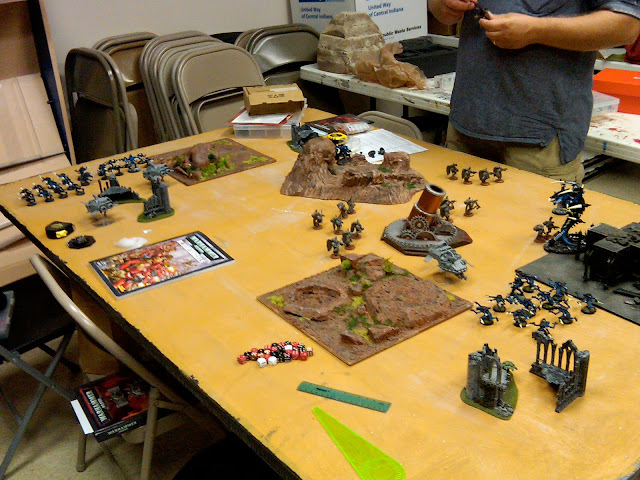 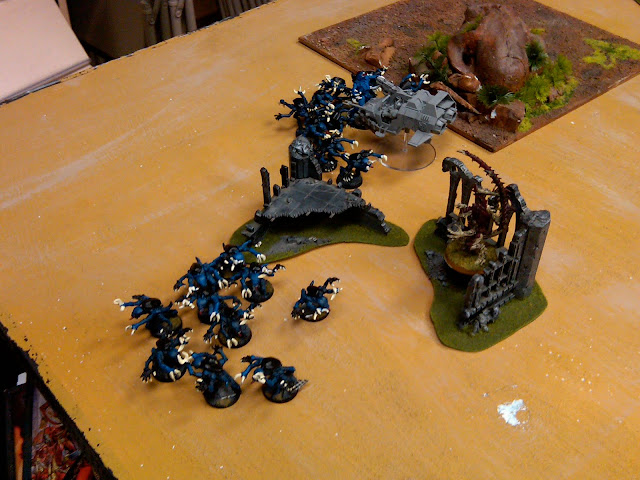 Deathleaper comes on, but doesn't do much. The Stealers on my left whiff against the first speeder, while blowing up the 2nd. 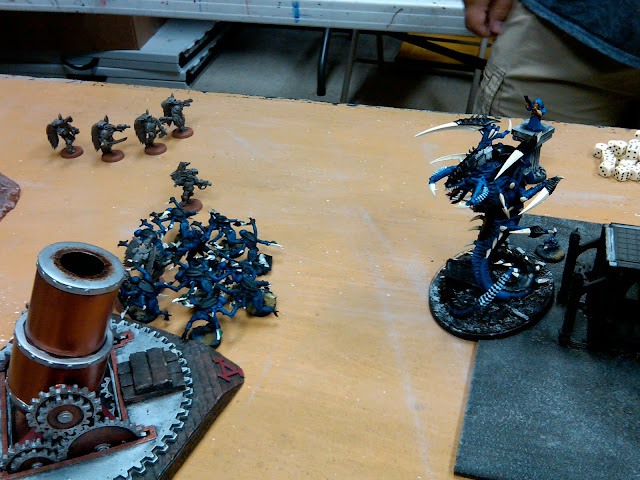 To my right, the Stealers bypass my Speeder and charge the squad behind Dante. One SG survives to hold the line.

Dante, meanwhile watches the Sanguinary Priest go down and says "Eff That!". He uses his Hit and Run ability to leave combat with the Trygon, scooting back 9". 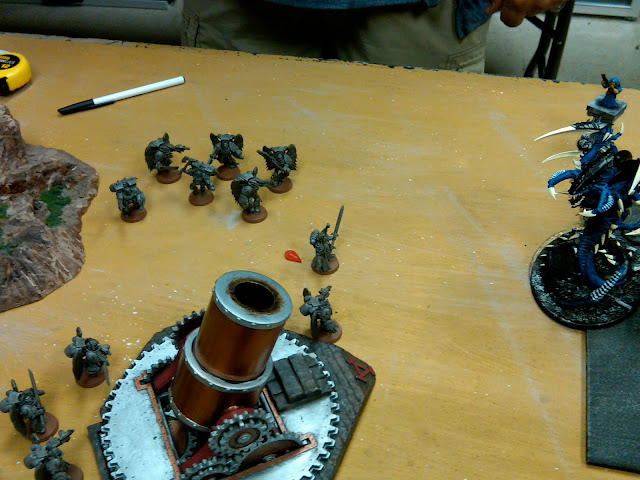 On my turn, Dante joins up with a fresh squad and steals Mephiston's Priest before charging into the Stealers. Mephiston moves too. He would have been here sooner, but Deathleaper lowered his leadership by 3 points at the start of the game. So no magical wings for him last turn.

Anyhow, Mephiston joins the brawl and the Stealers all go down pretty quick. They consolidate into the positions you see above. I'm hoping to draw the Trygon away with Mephiston. Only problem is that I consolidated the last Priest a little too far away to support him. 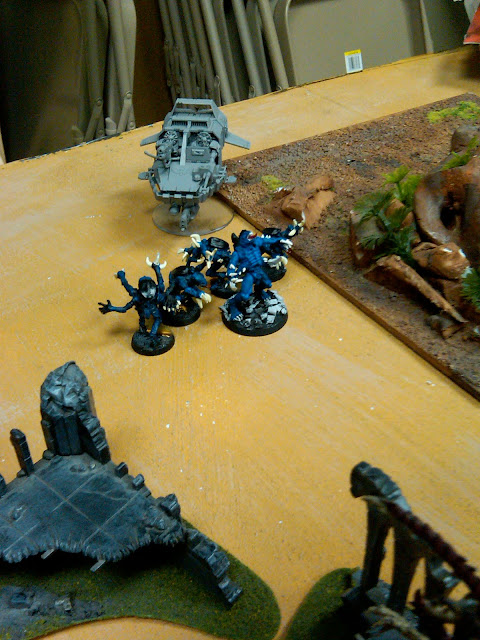 The Speeder on the left spins around and torches a Stealer squad real good. Ummnnn... what a smell! 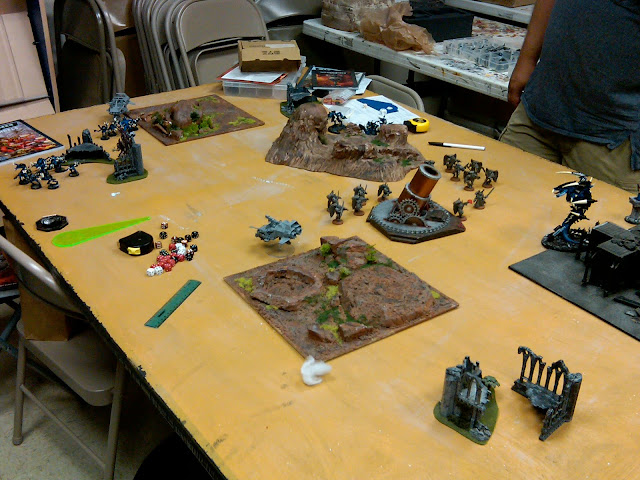 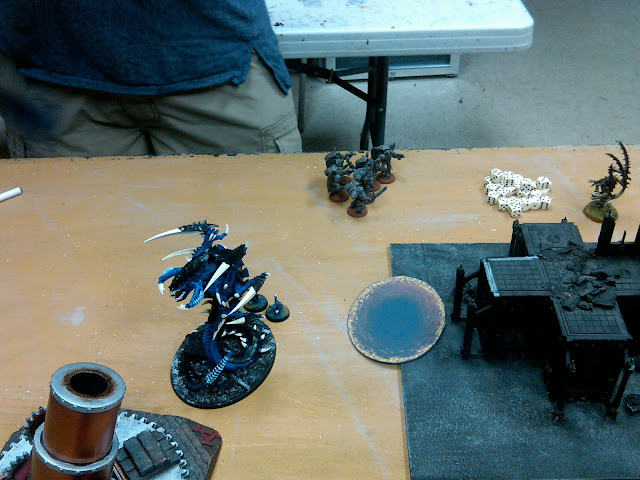 On his turn, BroodDude assaulted the Trygon into Mephiston, and by turning his base sideways, the lone powerfist too. Mephiston did manage to wound the Trygon, but failed the leadership test (Thanks Deathleaper) to insta-kill the beast with his force weapon. With deep chuckles, the Trygon then smashed both Mephiston and the powerfist SG.

Seeing this, Dante decided to ignore the Trygon and go for an easy kill on the last Zoey instead. Which he did. 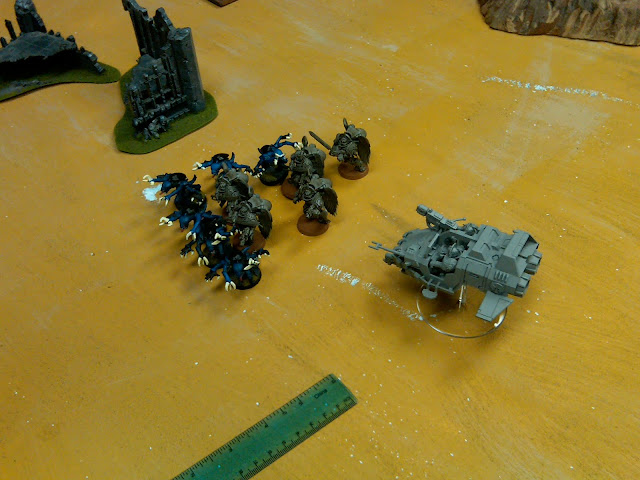 Down in the left-middle of the table, the larger unit of Stealers moved up. In response I sent my last full unit of Sanguinary Guard down to try and kill them, but I left two standing. Pfft! 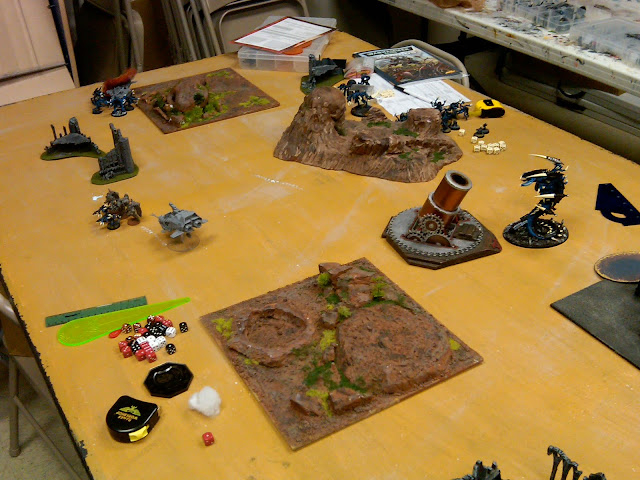 On the far left the Broodlord and his (now much smaller) squad of Stealers managed to wreck the speeder that flamed them.

And then the game ended.

Now, since Deathleaper decided to go back into reserve this turn, there was some question as to whether he counted as killed or not. We consulted the rulebook and Gibbs, but could find nothing definitive. So we rolled it off. BroodDude won the roll, so Deathleaper lived and we had a tie.

Conclusions
I think I'm starting to get a handle on how to play Sanguinary Guard. They're fine going in solo to kill Marine Tac squads and such, but if you're assaulting dedicated close-combat units, you'd better double up. Which means keeping the army together so that they can mutually support each other. You want to hit hard so that you deny counter-attacks and preserve as many SG models as possible.

I've also got a lot more respect for Trygons now, so I won't be charging in with single units on them either. :)

Mephiston's a monster, but he needs support against anything nasty too. Though I suspect I'll be dropping him for a regular Librarian and some honor guard for more competitive builds. Still, he's fun.

I also need to play the speeders a bit smarter. I didn't need to slow down and flame Stealers on the last turn as much as I needed to keep moving 12" (so he would need 6's to hit me) and blocking with them. That cost me some valuable kill points.

Still, the army is a blast to play!