I looked around a while at the tourney, and waited for my first pairing and got... 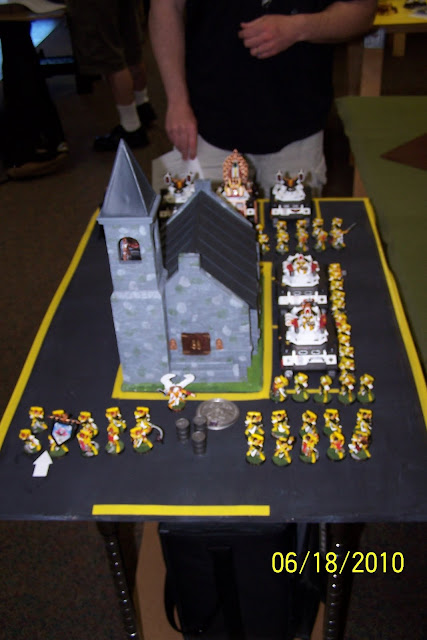 I got paired up with John's pure sisters force.

He told me this was one of his earliest times running a Jumpy Cannoness, something I run often, but in a different setup. I also eschew MultiMeltas in favor of more mobile Meltas, and Hflamer Immolators.

Total: 1496 (4 Faith Points)
The mission had a diagonal  no man's land between us (measure 12" from each corner, and then diagonal). With 3 evenly spaced objectives (barrels). The Secondary objective was VP's (yay!, KP's aren't nice to me). The tertiary objective was kill the most expensive HQ (Inq. Lord for me, Cannoness for John)

I won the roll for going first, and set up as such: 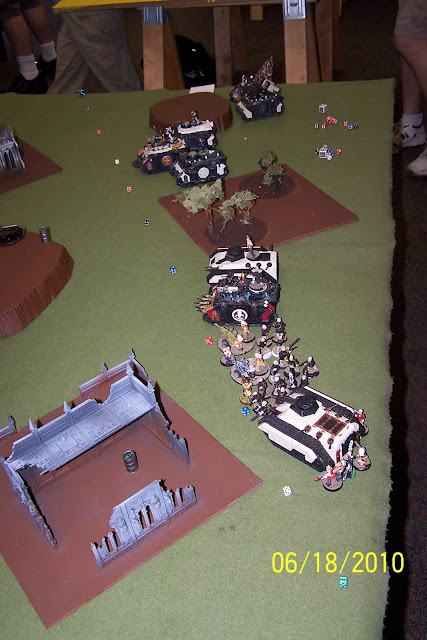 I was surprised to learn my opponent was afraid of my alpha strike, and started with only his troops on the board, leaving his tanks in reserve. I asked him if he really wanted to do that, and he assured me he did.
he set up like this: 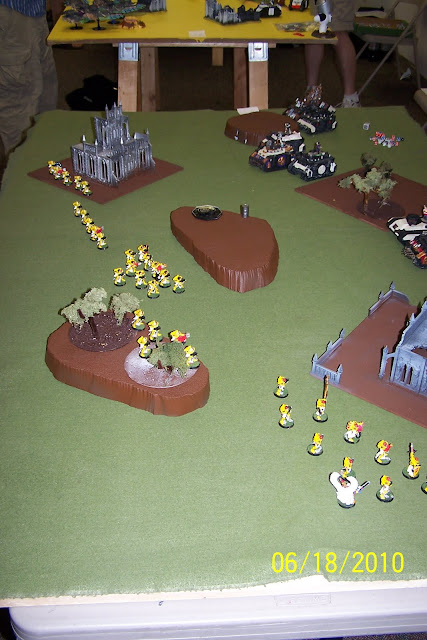 What you've got then is a sisters squad on foot on my left flank, the Jumpy cannoness behind that, a Celestian squad with MultiMelta in cover, a Sisters Squad hiding behind the rock, then two more Celestian MultiMelta squads.
He failed to seize the Initiative.
so I moved stuff up. 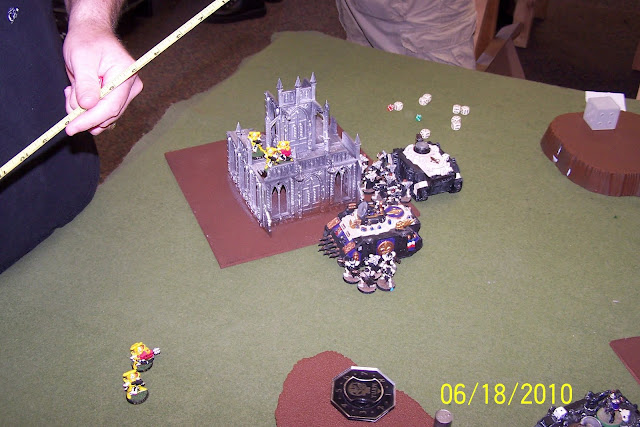 How things looked during John's turn1 moves
The far right rhino and Immo both surged 12", disgorged their girls, and shot. The center Rhino went towards the center barrel. 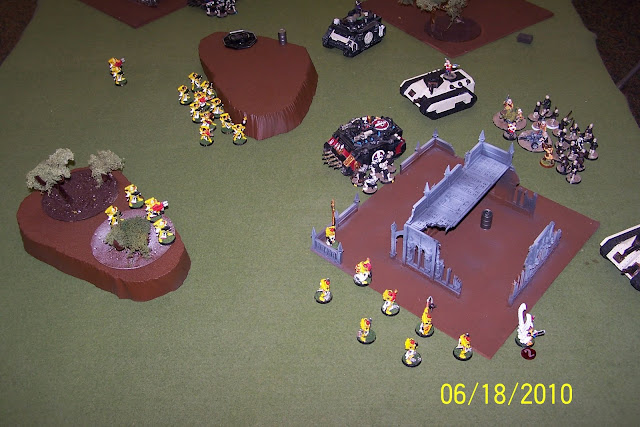 turn1 during John's moves
The PCS Chimera moved forward 6", to pepper the Cannoness with Multilaser shots, removing her Mantle (now she could be insta-killed) The Inquisitor squad loaded up, and the chimera shuffled a bit to the left, to take Multilaser shots, the Celestians moved 12" and disembarked, to pepper the Sisters squad, and the platoon took off one celestian in cover.
I had disembarked everything close to multimeltas in case of a hit, and to make more targets for my opponent. (which can make target priority a bit harder)
J's shooting didn't do much, and his cannoness was 6.5" from the =I= Chimera. I breathed a sigh of relief.
I think all of the multimeltas missed tanks, or failed to damage. which stunned me. with my 8 tanks, 3 MM's and 1 melta isn't a lot of anti-tank.

Turn 2:
I moved the =I= deathsquad forward to pump fire into either the sisters squad, or the cannoness, feeling sure I could insta-kill her. 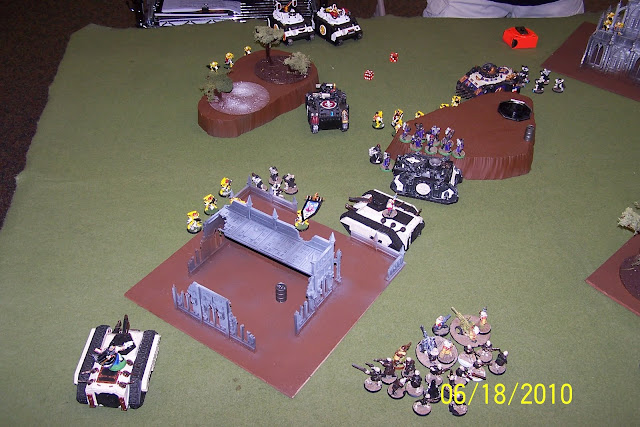 the board after my turn2, as John's tanks rolled on
The Celetsians walked up a bit, and shot into the sisters squad, the platoon shot into the MM Celetsians in cover, and broke them.the Immolators circled the center hill to torch John's center foot squad (with meltagun), and I unloaded the rhino sisters squad onto the hill for more shooting. The right side celestians moved forward, and killed John's celestians in the open. I'd forgotten to move my Sisters squad over by the building, and I think the Exorcists mostly whiffed, or John made his cover saves.
John had an Exorcist and a MM Immo come on the board. His Fleeing Celestians rallied, but had no targets, His MM Immo was out of Melta range, and failed to do much to my tanks, same for his lone exorcist.
He did kill off a few of my sisters squad in the center with the few remnants of his center squad.
Turn3:
I moved around to polish off John's left sister squad, and run my platoon onto an objective. My center sisters squad moved onto the center objective. 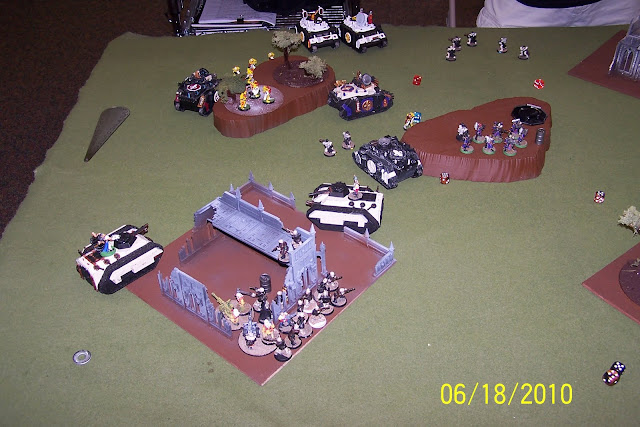 Left side of the board 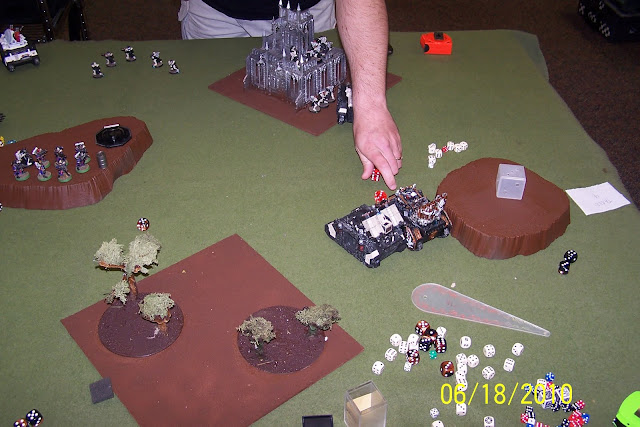 Right side of the board
John didn't get any more reserves.
at the end of the game, I held 2 objectives, John was able to run his last girl to contest the center objective.
I think if we'd gone 1 more turn, he would have brought a sisters rhino to contest the far building, and I would have claimed the center objective, and my near objective. the outcome would have been the same. John might have been able to make the VP total closer. There's still no way he would have touched my Inquisitor.
I think this went to 4 turns, but from the pics, it looks like only turn3. Multiple small Unit armies aren't the fastest to play. neither are foot Multiple small unit forces.
I think John should have started his tanks on the board. I know it's targets for me to pop 1st turn, but he could have put them behind the hills for cover, and had much more fire to throw at me.
I also prefer the dual melta / TL Hflamer Celetsian / Immo setup. It plays to my style. I was a bit afraid of driving into the jaws of a couple of MM bunkers. Then they didn't deploy. I'm not as afraid of foot MM's They're not as much of a threat to me, plus I can shoot the troops easily, and kill the MM.
If the Immo were fast, the TL MM Immo would be a LOT better. maybe next edition.
After this game was Lunch, and I would come back to play at top table against Carlos. Carlos and I have faced each other at the last couple Southside tourneys. today he was bringing his high Toughness, lots of wounds, fast Tyranids.
Should be good, I thought. 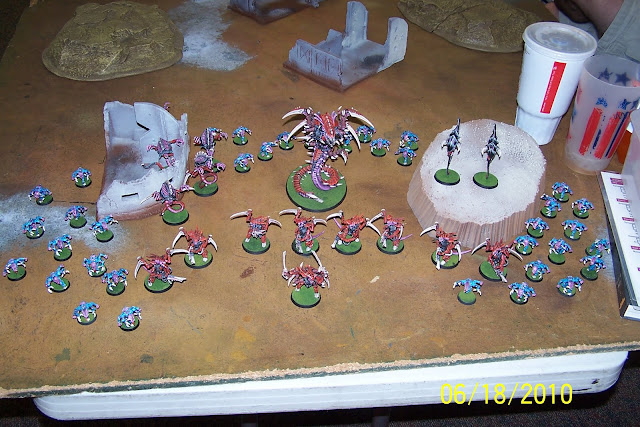