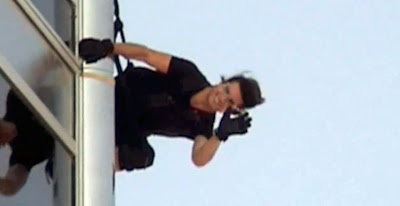 Man, the last time I saw a spy movie suck this hard was Tomorrow Never Dies. No, I take that back, this one was worse.

The first half of the film was fine, if a bit goofy. Once the Sandstorm was over though, the story went to hell in a Star Wars prequel kind of way, and only a set of very fine cleavage kept me from getting up and leaving the theater. Seriously, if I'm more fascinated by the wood grain on the wall next to your characters than the supposedly deep conversation they're having, something is terribly wrong with your movie.

We got not one, but THREE separate "Let's break into the server room" scenes. Each of which made less sense than the last. Really guys? Really? You don't suppose that an electro-magnet powerful enough to levitate a human being in chainmail might, just might, interfere with the servers or cause other problems, do ya?

There's also the rampant and obnoxious Apple product placement. I'm an Apple fanboy and even I found it grating. Look! We're setting a timer ON OUR IPHONE! NEXT TO A MACBOOK AIR! We're peeking around a corner USING AN IPAD! Look! Here's ANOTHER IPAD used to track a bad guy! Look! Here's a rich Indian guy, he has FIVE IPHONES! Here team, have an IPHONE now that we're all buddies!

And let's just say that the writers know absolutely nothing about how NORAD would realistically respond to an incoming ballistic missile threat. Though I was amused at the apparent target. Which was a sly joke that only people in the animation industry are likely to get.
posted by SandWyrm at 7:00 AM