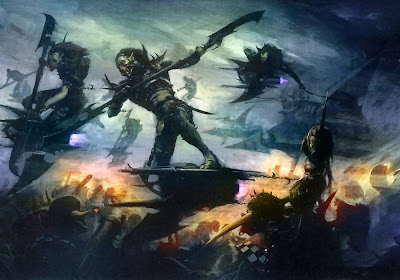 After more than 10 games I have finally come up with the force of my Dark Eldar that I will be running in future local tournaments.  They are not up to the level of my space wolves yet, but I feel they will be in 6 months of constant play.  Unfortunately I will not have them back until after the The Indy Open Grand Tournament in March.

Unfortunately I have not got in any games with guard players as now the gaming area has very little left.  Through trial and error, this is what I have found to fit my play style.  I drastically changed certain portions of my army the last 3 games, but I am happy with the results and plan on moving forward with only a few changes here and there.

So without any further waiting here we go.

As you can see I don't have a ton of vehicles.  The idea is to not depend on so many easy kill point vehicles.  With this 2,000 point list I surprisingly only have 18 kill points.  Most Dark eldar armies have 20-25 at this point level.  As I have learned from being handed my bottom by Xaereth the Hellions are an amazing unit that is amazingly resilient and powerful if used correctly.  They are what my Thunderwolves are in my space wolves list.

The Talos primarily comes from the webway portal but provides a twin linked liquifier gun for cooking marines and a twin linked heat lance or haywire blasters.  This unit also provides a toughness 7 creature that is great at popping vehicles at midfield.

The Trueborn are there with their venoms for the blaster and splinter cannon goodness of course.

The Incubi are only 7 strong but good enough to kill a 10 man tactical squad before they can swing back. They also can come from the webway portal or work as a counter assault unit.

The wracks are something added halfway thru the list building process.  I have a small unit of objective holders and pain token sacrifice for the Hellions, and a larger 10 man squad with double liquifier guns, and an acoste with a venom blade.  The 10 man squad can also either enter via a webway portal or be deployed normally as their toughness 4 and feel no pain make them tough to take down in shooting.  The 10 man squad has 27 WS4 attacks on the charge with 4+ poison.  The acoste adds 4 more attacks with 2+ poison.  Against toughness 3 the wounds are re-rollable, and if they have 2 pain tokens they are re-rollable against toughness 4.  The 2 liquifier guns also take down MEQ fairly easy. A liquifier gun is a strength 4 flame template with a random d6 ap.  There is a 50% chance to cook ap3. :)

The Scourges are a unit that is seldom seen on the board.  I play mine with 2 haywire blasters in each squad.  Their purpose is to stunlock vehicles at a 24" range.  The haywire blaster is like a haywire grenade but with a 24" range.  After hitting you roll a dice; on a 1 nothing happens, on a 2-5 you score a glancing hit and on a 6 a penetration.  These work wonders against Necron vehicles because the AV13 means nothing to them. Them also being open topped means haywire blasters can pop vehicles fairly easily.

So with only a few changes here and there this is the list I will be playing.  I have tested this basic list against the following lists:

To date I have been victorious on 10 out of 11 games with a tie to Dodger3.  I still have to get in games with Guard and more Space wolves and Grey Knights to  be completely satisfied with this list. I would also like to play some other dark eldar, Orks, Tau, and Eldar as well.

Overall I feel this army is:

Fast,
Hard hitting in close combat,
Has medium level firepower,
More resilient than other DE builds due to not depending on a lot of paper airplanes,
Able to stand toe to toe with MEQ armies and beat them in a firefight and close combat,
An overall good all comers list so far.
posted by Spaguatyrine at 10:35 AM