So I, along with many other it seems went down to Bloomington's Game Preserve expecting a roughly 6 person turn out. What we got was a 20 person tournament, with almost every codex represented. They were just as shocked as we were, and had to use a second room to accommodate us all.

NOTE: This was almost a month ago, I've been slow on getting this done.

I think I managed to get a picture of each table during deployment of round one. Here they are so you can see most of the armies. Not the best quality but sufficient I hope.

And Then there is my opponent's deployment. Eldar. 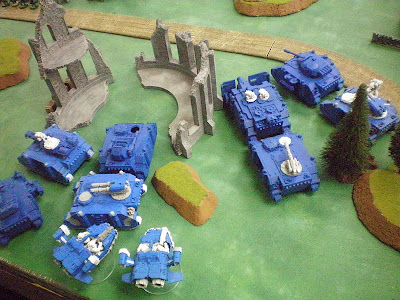 I hold my Storm raven in reserve as He has first turn and has a couple Lances. I figured I would use it to focus fire on something when it comes in. I try and keep my AV13 in the front to make him work for the glancing hits with his S6 that eldar are known for. 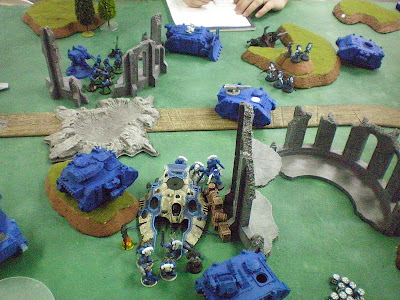 The first three turns or so were pretty much us each glancing the other. He couldn't roll high on the damage chart, and I couldn't roll to pen with all of my missiles and lascannons. 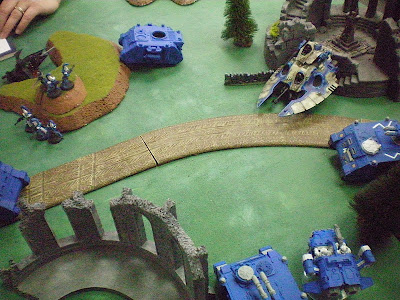 Turn 4 comes around, and it is like 4 to 3 on KPs going into the bottom half (my turn). My Stormraven still doesn't come in from reserves, giving up another kp, So I am a little concerned, as I could have really used it then. Luckily I am able to focus fire and maneuver to deny cover so I am able to kill the last of the Striking scorpions, The Banshee exarch, one of the Dire avenger squads, and two of the vehicles that have been immobilized the majority of the game that I had been having trouble with. So I end the game 9-4, with 5 of the KP earned on the last turn.

I didn't take many pictures after this. Game two was tons of small objective/items. Infantry could pick them up and move with them. I was faced against a foot Wolf list of 3 squads of long fangs and 4 or 5 squads of wolf guard with cyclone missiles in each squad, and one had logan. Basically I drove forward first turn, fired vindicators and everything else at the long fangs but they made plenty of cover saves. He then shot 30+ missiles at me and wrecked/immobilized most of my vehicles on his turn one. I couldn't make a cover save for any of tanks except the back razorbacks. Those two razorbacks shot lascannons for three turns. Turn 4 I had like 4 marines left in the game, that was it. Objectives were like 1-8, solid loss.

Game three was against a Shrike list. 20 assault marines, 20 SS/TH termies, and 20 tactical marines. I deployed with sacrificial Baal and storm raven forward. He infiltrated an assault squad with powerfist, melta bombs and shrike in front of me. I scouted and then drove up and used my Flamestorm to take out the majority of Shrike's squad, and opened up on the terminators. The second assault squad assaulted my storm raven who had gone flat out over to harass from the flank. The power fist hit and wrecked it. My dread jumped out and tore through the entire assault squad in one round, and was then immobilized by lascannon fire from the tactical squads.

The critical moment was when he got a 6 on his flee roll with both terminator squads, which allowed him to multi assault almost all of my tanks. I had been backing up and was almost exactly 18" away, and was prepared to put blockers and rapid fire with plasma on my next turn. His fleet then assault denied me of that critical turn and changed the battle.

The game ended I had a razorback left with 5 marines, and he had 8 terminators. I take that as a well played game considering how much I had to kill.

Overall it was a great tournament. Compliments to them for being able to adapt to accommodate so many of us so quickly. Some really tough lists and a lot more foot lists than I expected.
And it was Scottydon't that came in first place if I recall. Beating the Wolf guard list on painting.
posted by TheGraveMind at 1:49 PM