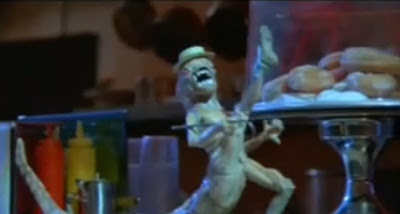 As TheGraveMind mentioned, we've gotten some Tyranid questions of late, and it's high time we got to them.

He did a good job laying down some base ideas about the viability of the army, but being the snobby bug leader that I am, I had to put down my own thoughts on the subject...

I'm going to say something up front, just to get it out of the way.

Yes, the Tyranid codex has some... let's call them "less than optimal" selections.  Certain units range from "You take those?" to "Well... let's see how they do..." on the "I'm gonna pwn you" scale.

Pyrovores?  Maybe if they'd been able to keep the AP3 that testing decided was "too powerful" (oh noes, marines gets no saves, can't has that).
Screamer Killers?  A touch expensive for a relatively slow CC beast with WS3 (granted the talons do help that last bit).
Rippers?  I'm still waiting for an incarnation that makes me want to take them.  Truly, I am.


Also, yes, the Tyranids got hit needlessly with a thing or two in the FAQ that just screams stupidity.  Shadows in the warp?  Sure, let's give them the only psychic defense that can't go through walls, despite being the shortest ranged version (if rather potent) in the game.

But we can sit and argue the bad points all day long.  In looking at army viability, it's less about what they can't do, and more about what they can.  You'd think that these two things are basically two sides of the same coin, but that's not always the case...

Example.  One of the big questions for any army is "can they pop armor".  If the answer is a resounding "no", then most people are going to shy away.  It makes sense, given that the rules for throwing your guys in a mobile bunker seem to get better and better.

Most armies have a simple answer for this - melta.  And missiles.  Longfangs or their little brothers, devastators... Psyfleman Dreads... melta vets in chimeras... all of these things are built to say "Hello, transport... Goodbye, transport".

So question one:  Can Tyranids take Melta and Missile launchers?  No.

Can they do other things to armor?  Yes.  And this is where the two things start to be different (that whole "can and can't do" bit).

Tyranids can often do what other armies can, but they do it in different ways.  They can destroy armor, but (obviously) can't tote melta guns to get the job done.  So what do they rely on?

There are some more straight-forward answers.  Enter:  Hive Guard.

Sure it's only a 24" range, although with an Assault profile you get a little wiggle room.  The real kicker is that you get to ignore Line of Sight, meaning your already T6 beasty can sit behind a big ol' rock and chuck super-guided chitin spears at you all day long.  The two shots at BS4 don't hurt, either.  Neither does the budget cost of 50 points.  And since they come in broods of 1-3, you can fit them pretty well into any game size.

Next up is the oft debated Zoanthrope.  Sporting an even shorter range (18" for the anti-tank blast), the real "problem" is that the opponent gets to kick on any psychic defense they have floating around.  "There are too many die rolls" people say.  In addition to the normal hitting and destructioning that goes into normal vehicle hunting, yes, you need to pass that psych test and get through the roll for any defense measures they're hiding behind.  There are more dice, granted.  But does anyone actually stop to look at the overall chances of causing damage, instead of just backing out at the first sign of resistance?  Afterall, a S10, AP1 Lance shot does sound pretty tempting to me, even if I have to jump through a hoop or two to get it off.

All things considered, a Zoanthrope has a 13.5% chance of doing significant damage (immob or better, on a Pen) to armor 12.  Against armor 10 (and let's remember the relatively cheap Spore Pod option that nigh guarantees this light armor facing) it jumps to 30.5%.

This is both ignoring glancing hits completely (for ease of my brain), and taking into account a 50% flat reduction in effectiveness for "average psychic defense".  Hoods are actually less than 50%, assuming Ld10 on both sides.

But these numbers don't mean too much without comparison.  So what about a BS4 missile launcher, seeing as how this (or other comparable equipment) seems to be the main choice?
Against AV12 you're looking at an 11.1% chance to do the same damage.  Against AV10 it doubles to 22.2%.

Both well below the capabilities of our favorite brain bug.  And while the Lance rule won't come into play vs 9/10 vehicles, go ahead and swing that launcher at a monolith and let me know how it feels.

Now I can't quote the cost of a marine with a missile, but the zoanthrope is a fairly cheap 60 points, can come in groups (gotta love the dedication of all those blasts coming from one spot), and also supports your teeming hordes with Synapse control.

It's worth noting that the Tyrannofex also exists, with the option for a 48" range S10 tank blaster.  It's also worth noting that at just over the cost of your friendly neighborhood land raider, I've yet to put one on the table.  It has its perks (like six wounds and a 2+ save), but it's a bit rich for my blood.

So those are your big "standard" options, but what about the bug way of doing things?  That is to say, getting up close and personal.

There are a lot of bugs that would love nothing more than to crunch open enemy tanks with their bare talons.  Little is more satisfying than that metallic screech.  Genestealers (of either variety) will rip a new hatch into most vehicles.  Warriors or Raveners with rending claws sport the same ability.  And if you want to talk MC's, well... any one of them can almost guarantee a dead tank if it gets too close.

The danger, though, is what lies within.  Just as how you have to be careful about assaulting a tiny unit, obliterating them, and then waiting out in the open during your opponents shooting phase, you have to be very wary about what sort of retaliation is coming from a transport after you open it up.

This means that throwing 'stealers or other clawed beasts at a guntank is generally a safe bet.  The worst case scenario is an explosion, which between (usually) T4 and light-to-medium armor means probably 2-3 wounds.  Know the risks and weigh the balances.  I say a couple of dead 'stealers is probably worth a dead tank that would have wiped half the squad anyway, if not more.

So what's it all boil down to?  When it comes to CC'ing transports, pick the right tool for the job.  Not the job of actually killing the thing, they'll all do that.  The job of surviving the next round.  So what's it filled with?  Is it one of those pesky chimeras with 5 guys and a bunch of Meltas?  Probably not a great idea to use your expensive Tyrant or Trygon.  Unless you like giving up half your wounds.  A squad of Stealers though?  Those 2-3 melta wounds hurt a lot less.  Now, if you're looking at a squad of battle brothers with a full compliment of bolters ready to rapid-fire, then maybe the big bug is the way to go.  T6 will protect against most small arms fire, not to mention the 3+ save.  That hail of bullets would shred a squad of gribblies, though.

In the end, the truth is Tyranids don't have the easy(er) way out of Long fangs or Psyflemen that do the point-and-kill routine all day long.  But they do have methods that are effective.  It'll take a little more planning and cunning, but that just makes the payoff (and biomass) all the sweeter.
posted by Anonymous Foodie at 1:41 PM