First game of the year 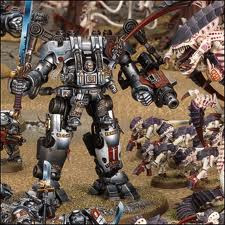 Spag TOed an excellent tournament last month, with Tyranids placing 2nd, 3rd, and 4th place (daemons got 1st). After which He decided he wanted to test his tournament lists vs the new competitive tyranid build. I was happy to oblige.

We Played out at 1750. His first list was a GK/Necron team up. 2 strike squads, 2 dreadknights, 2 cron fliers with warriors, wraiths w/ lord and grandmaster.
I was running Dual Flyrants, 2 tervigons, 2 trygons, doom, and 3 hiveguard. 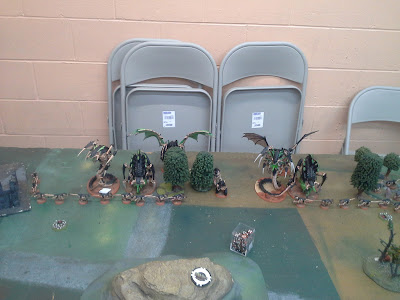 Dawn of war deployment, With both relic, and 4 mysterious objectives. Both forests are carnivorous. I won the roll to deploy first. 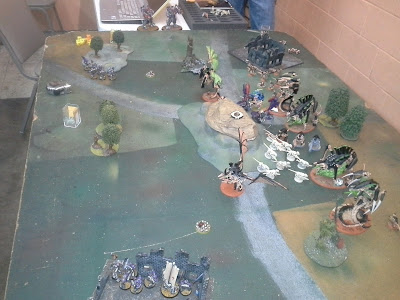 Two strike squads in opposing corners, one with grand master. Necrons to one side. My hive tyrants fly forward, start circling, killing 2-3 marines each turn till the squad is dead. I move up a bit too aggressively. 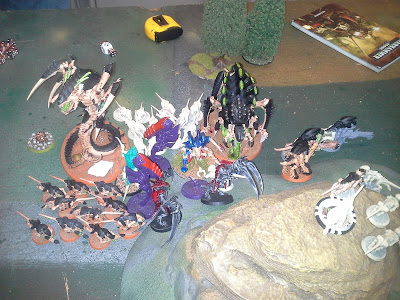 The Not-my-nids are proxy for necrons, while Spag's are being painted. They are a destroyer lord and wraith, which get the 9 inches needed to assault my front gaunts, 1 survives and holds them in place. My second Derp moment of the game was assaulting in with my Tervigon, which let the lord challenge him. Couldn't pass mind shackle scarabs to save my tervs life. I passed once, smashed the lord, and he stood back up...UGH. 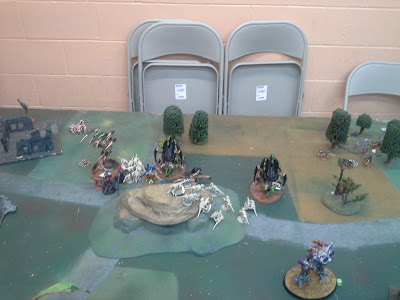 Dreadknights deep struck in, incinerating gaunts off of objectives. Doom scattered into Warpquake range, and was placed in the furthest corner. I kept the wraiths enfeebled, and drowning in gaunts. 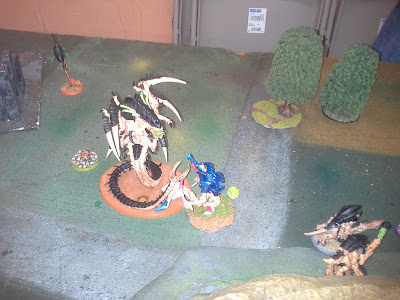 My trygon and Necron lord were all that was left, and Trygon just kept hitting himself. Doom finally made it into the game, to kill off the lord the next turn. 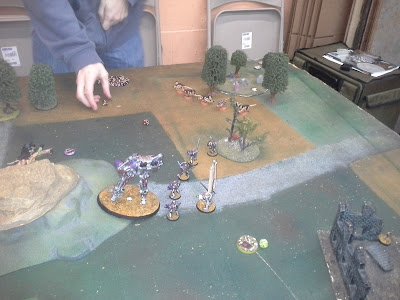 Gaunts about to die, and marines with grandmaster getting pelted by devourer fire.
Dreadknight helps kill last of hive guard. 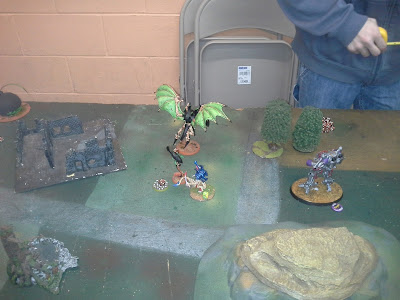 So the game ends, I have doom, and both Hive tyrants left, He had a dreadknights and 1 cron flier left (with troops). He had made both of his DKs scoring with the grand master, and so was able to snatch up the relic, and grab one objective winning both conditions. A very Bloody game. A few miss-plays on my part, a few key dice rolls, might have gone a different way.

We ended up playing a second game, Same list for me, For him it was Space wolves and GKs. Kill points and regular objectives. His drop pod plasma tried to take out my tervigon early on, but missed/overheated with about half. We ended up trading trygons for dreadknights. I thought my Warlord was toast when he was grounded, and assaulted by thunder hammer strike squad, but I FNPed them away and won combat. His drop pods gave away easy killpoints to hive guard shooting, which helped me keep a small lead there.

In the end I had 1 objective, and I think 2 more KPs winning me that game. In this match up atleast, the Cron allies proved more challenging, but I think both lists are very brutal. It was good to finally get another game in against Spag. I hope to get the chance to put it on the line at a tournament against him some time soon.
posted by TheGraveMind at 2:38 PM