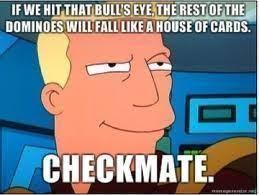 As I have been hitting the webs and getting a few more games in preparation for The Indy Open. I have decided to write a post about testing your thoughts on target priority.


In 6th edition the game has changed target priority status for me when I play.

Keys to target priority in my humble opinion.

#1. What is the mission objective- Most people don't look at this as the first priority.  It is crucial for many reasons. If the mission is objectives and your opponent only has 3 troops.....kill all the troops first and he can't hold them.  If it is victory points go for easy victory points instead of that giant unit of 10 strike squad with coteaz and a librarian in it.

#2.  What unit of the enemy can come and eat your lunch causing you a very bad day-This is my number two priority. If I see a storm lord across the table, or a flying daemon prince with a black mace, or a unit of 5 thunderwolves with a lord, I need to either make them a high priority for targeting or make them a low priority if I cannot put in enough firepower to them and plan on ignoring them.  (Don't underestimate your opponent.  Visualize what you would do with them if you were on the opposite side of the table.  Hence I often walk around to my opponents side to see if I see a mistake on my end or before I deploy to see firelanes, etc.)

#3.  Try and think at least 1 turn ahead- I do not play math hammer but quickly calculate on whether or not I can hurt this unit enough to do this or that. By thinking a turn ahead you can remember enemy reserve units coming in, calculate if you need one of your assault units to back up your shooting units, to totally change your strategy and flip the script. I often know 2 turns before I actually see the result if I am losing or not.  Play chess with yourself in your head. If I move my daemon prince up 24 inches, shoot my X, next turn I will turn 90 degrees and go after possibly Y.  People make a lot of mistakes with flyers because they don't think about the turn ahead. Instead of just flying on 36" to get that shot why not move on 18, still get the shot, then have the ability to turn to either side and stay on the board shooting again....?  I try and think 2 turns ahead but that gets tricky.... when you are playing someone of equal skill 1 turn is usually all you can do.

#4.  Have a brother beside you- I always count on two units to kill what 1 should.  6 grey knights with storm bolters have a primary and secondary target.  Their 12 strength 5 storm bolters should kill 6 gaunts easily.  While I move them I also look for a second unit that I plan to shoot at a hive guard unit also be in range to tap into the gaunts if something happens. In addition I might have my storm raven that has primary shooting duty to that swarmlord also capable of shooting the hive guard as their secondary if needed.  Once you determine every one's primary and secondary targets.  GO IN ORDER OF WHO NEEDS TO DIE FIRST!  That way you can systematically destroy targets efficiently.

#5.  They will shoot you back-You might have a high priority target that can out shoot you. In this case you need to mitigate their shooting by either reducing the amount of return fire or putting space or cover between you and them.  I.E.  There is a 50 man blob that you want to assault with a company command squad hiding behind some trees that will probably give them 1st rank fire 2nd rank fire and annihilate your assault unit.  Priority one in shooting just because that company command squad.  Wipe them out and you have a greater chance of success.

These are my top 5 keys to target priority.   Your thoughts are welcomed.  What do you think?


You are playing against the list below and the mission is the relic with victory points.

You have 1750 points.  Tell me what you have basically and what would be your target priorities?

Good Luck. I will take all your responses and grade anyone interested by my perceptions.  No need to give an exhaustive list of what you have just a basic idea.....