A Question Of Focus 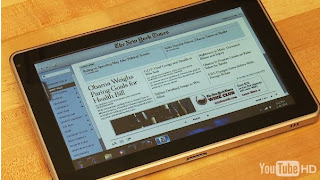 I ran across something in the tech world this week that sort of epitomized the way most folks approach list-building for 40K. In a high-stakes game that's much more expensive to play than ours. :)

In case you've been living under a rock recently, Apple has finally released the iPad, to much hoopla. Well, now HP is getting ready to release it's own touch-based tablet, the Slate.

What is most interesting to me is an internal HP slide that was "leaked" to various websites. It reveals a lot about HP's internal thought process. 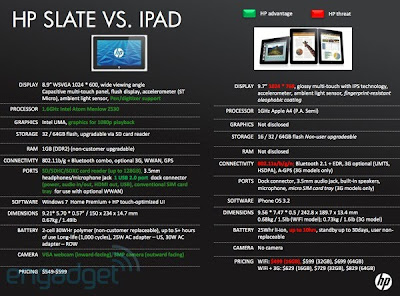 Do you see what I see?
HP is focused on a checklist of parts and what it perceives as a boon or a lack in each. I imagine a group of HP executives sitting around a conference table and yelling out the following:

When, this is what they really should be asking themselves:


"Is our user experience competitive with Apple's?"
"Does our tablet have a wider appeal to potential buyers?"
"Can Grandma use it?"
"How are we different from the Windows tablets that have failed already?"
"How easy are we to develop for?
"How can we build a revenue stream from the device like Apple's iTunes store?

Since HP's not asking the important questions, Apple is going to clean their clock. Just like when the original iPod was released and the competition wondered why nobody bought their crappy MP3 players.

So what can we 40K players learn from this?
A lot of us go through lists that we find on the internet and pick out the parts we like.


"Oooh! A Psyker Battle Squad!"
"Man, Hydras really kick out the dakka!"
"Vendettas are Cool!"
"I like this Platoon idea!"

But those are just isolated parts of a whole. If you don't consider the overall strategy of your list and choose your parts according to the need of the whole, you'll end up like HP. Strong in some areas, weak in others, and totally lacking in the synergy that can take you to the next level.

So ask yourself the following the next time you're making a list for a tourney:

Ask yourself questions like these and, like Apple, you'll choose your parts to fit your strategy instead of vice-versa.
posted by SandWyrm at 12:04 PM