A collection of skulls

It has been a busy past week, but I've had some time to think and work on models. I've thought about fluff, budget, schedules and Army soul searching. I've came to one absolute conclusion, I enjoy armies that want to dismember you! Also, begin the train of thoughts.


Now I've been on a modeling spree the last week or so. I've been working on my secret project (more hints and pictures to come) which may or may not involve tyranid terrain. I've also gotten a few more games in with my Nids. And the more I do, the more I fear I do not like this new codex. Nothing really wrong with it, but it is no longer the army I collected and played. I just had an Ard boyz practice game a few days ago, and I won with a massacre, 21/2. And somehow I did not enjoy it. It was my second victory with the new nids. I was almost happier losing every game with the old codex, than winning with the new one. I'm not sure if it is because I don't feel like I have options or what it is.

Every couple of games seems to leave a bad taste in my mouth and makes me come back to my chaos. So the Nids go back to the painting table, because I have finally learned how to paint them well, while I assemble more marines. Eventually I'll figure out how to paint Power armor (my painting kryptonite at the moment). And it seems they will be one of the last codices to be updated, around 6th edition..... sigh. But, that is ok, because I actually can put a theme and fluff behind them, and still be playable.

Maybe that is my problem with my tyranids, I feel I can no longer have a viable themed army that plays well. An in-your-face army that is almost all close combat will not work anymore. Not that it really worked well before, but now they made things more expensive and even more fragile. With the inability to upgrade armor, genestealers and the like are hugging cover even more so, and now they cannot take flesh hooks, so they are almost always Imitative 1. Sometimes it feels like I'm playing an IG gun/tank line. Everything moves up, shoots, moves up, shoots, enemy gets close, move back, shoot, move back, shoot. Our rush units, raveners, hormagaunts and gargoyles, while more effective when they hit, now have huge hits to leadership from 10 to 6, and can no longer operate outside of synapse like they need to. It requires our entire army working in union for function, and it is worse than last edition.

We had trouble taking out a sniper or HWS that was out by itself because we had to dedicate a large portion of our army to getting them, because everything had to be baby sat and could not be sent out on their own. Sure now shooting is better and we can do that instead, but it does not ignore armor nor does it tie them up. It is also not the feel I want when I play.

This has turned into a longer rant than I expected, but it has made me realize two things. First, after Ard boyz, If/when I play my tyranids again, I will be dedicating more of my army to hormagaunts and genestealers and rush troops. I'll find a way to make it effective and by golly I'll have fun with it.

The second thing is I may end up doing the very thing I wanted to avoid. I was originally having my chaos themed around slaneesh because I like the high initiate close combat monsters (who have grenades!), but it seems the big S doesn't do combat as well as I would like. I always hated Khorne, because it seemed so barbaric, just madly assaulting forward. Sure I did it with nids, but it took finesse to make Gaunts kill things, they don't have 3+ armor. But the more my Tyranids seem to be losing that feel, the more I'm considering adding some dedicated assault to my CSM. This also is considered because Wolf's blood claws seem to keep rolling my units, AKA the most easily killed plague marines ever.

In closing, I've spent a lot of time and money into my tyranids, I can paint them well and I have an attachment to them so I'll always keep playing them. But until Mech dies down or something changes, I'm going to be playing my Rogue chapter a lot more than originally planned. Unfortunately I cannot afford to get them any of the nice things they deserve for now. These mercenary marines will have to make do with what they have, which is a lot if you have yet to face them.

So I’m changing my motto to 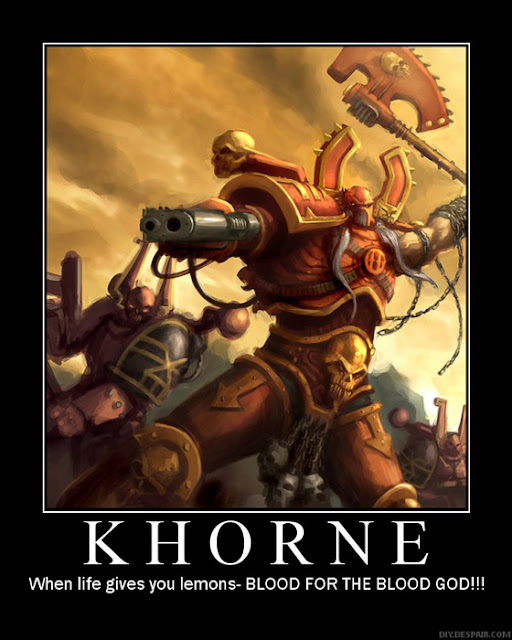 posted by TheGraveMind at 2:05 AM