How SandWyrm Got Into 40K 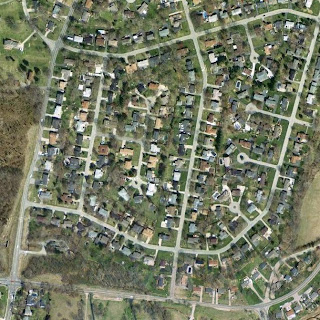 Guess which house was mine. :)

A group of 3 high school gaming geeks (and one guys little brother, still in middle school) got together in my neighborhood and started playing a game called Warhammer Fantasy Battle.

Anyhow, there were 4 of us playing square-base Warhammer and one day Bob (whose parents would always buy him new games if he wanted them) came home with a copy of the Rogue Trader rulebook. We played a few games with a squad of Bob's beak-helmeted Space Marines versus my 2 squads of Squats and decided that it was kinda cool, but we liked Adepticus Titanicus and it's later add-on: Space Marine a lot better. We'd been huge Battletech players for a couple of years, so Adeptus Titanicus was amazing in that it let us get our giant robot fix while avoiding the stupidity of filling in little circles like some long, drawn-out standardized test.

Well that and the Space Marine tanks/infantry didn't suck. :)

Anyhow, I then went off to Art School, where I persisted in trying to figure out how to play WFB. Eventually I gave up square-basing and concentrated on getting a job when I graduated in '95. 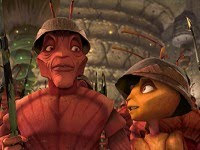 In the late 90's I moved out to Silicon Valley at the height of the tech boom and got hired on as a Technical Director (Sounds fancy and powerful, but it really wasn't) at Pacific Data Images (later PDI-Dreamworks Animation), helping to make background paintings for the movies Antz (above) and Shrek. It was there that I spotted a guy in the art department with a couple of Space Marine figs on his desk. His name was Kundo (Born in Argentina). Kundo was PDI's resident real-life model maker, and had worked on Starship Troopers making the miniatures for the various Federation fortresses.

He was also an absolute 40K nut, and pretty soon I was playing 40K games in his garage with his friend Huck, who was a lead animator at Industrial Light and Magic. Huck animated the Rock Monster in Galaxy Quest and was an real-life born-in-the-swamp hillbilly from Louisiana. He played Orks of course.

We also had another guy from Pixar who came over sometimes, but I don't remember his name. He was one of those guys who's glad to come play as long as you collect and paint his army for him. :)

This was during the change-over from 2nd Edition to 3rd, and they were playing Orks (Huck), Blood Angels (Kundo), and Chaos Marines (Mr. Pixar). Kundo had one Leman Russ Battle Tank and some Stormtroopers that he let me use until I found an army of my own. It wasn't long before I settled on IG Tallarns based on my recent discovery of the film "Lawrence of Arabia".

I ended up collecting and painting lot of Guard models, but never learning to actually play them. So I didn't win more than 2-3 games over the 2 years or so that I played with the guys. We drifted apart after I made the jump to video games instead of movies. So I ended up playing sporadically here and there with other people I met at shops or other jobs.

I was playing both 40K and WFB all this time, but finally got tired of getting stomped whenever I played either game. So I quit. I returned for a bit in '03 when I moved back to the Midwest, but saw quickly that things hadn't changed much while I was away. The game was still stuck in the old GW arms race of new codices and fantasy books always being more powerful than the ones that came before. Um, bye.