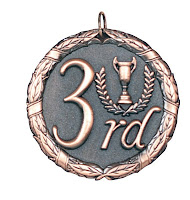 Here's the rundown of how I got 3rd place at 'Ard Boyz.

Originally this list had 2 units of 10 veterans in the Vendettas instead of the =][= Stormtroopers and one less Russ, but after the scenarios were posted I saw that my 205 point HQ was going to be worth 2 bonus points all by itself in the first mission. One for being an HQ; one for being the most expensive unit in my army.

So I dropped the Vets to =][= Stormies in order to free up 150 pts. for another tank. I chose a vanilla Russ to pair up with the Exterminator for a small boost in AT power and a large boost in anti-hoard power. This would also make that 300 point unit pretty much un-killable outside of assaults. I almost added another Hellhound, but a squadron of 2 wouldn't last very long in the way that I use them to break up incoming hoards. That would just be handing a free bonus point to the enemy.

Now in retrospect, I really should have kept the original list. But I'll get into that in the individual battle summaries.

Round 1: Orks
My first game was against a North Store regular, who I'll dub "Orkbama Bin Lootin'" after the unit of his that I hated the most. Here was his list:

Bin Lootin' had played a practice game against me a few weeks ago where I had all but tabled him by turn 4 when we called it quits because the store was closing. That list had used 3 or 4 Battlewagons with a couple of Trukks. During the game, I had outflanked 3 Stormy Chimeras into his flank as he advanced, cutting him off at the knees and killing most of his Boyz with nothing but those 3 Squads, while the rest of my line just hung back and added supporting fire.

He obviously learned that lesson well, as he brought a much better list to 'Ard Boyz. Unfortunately the memory of that easy victory made me overconfident, and man do I suck when I'm overconfident. :) 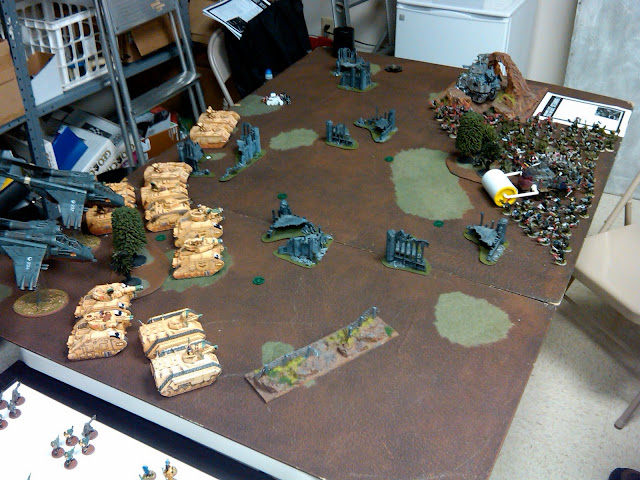 He had only 2 Battlewagons this time; one with the lint roller of doom and the other full of Lootas.

Now, he showed me the Lootas. He said they were in that far Battlewagon as he physically dropped them into the back of it.  So some part of my brain should have realized they were there, what they could do, and made me avoid them.

So I promptly forgot about them and wondered why he was sticking a Battlewagon in the middle of some area terrain. "Cool!" My not-yet-awake brain thought. "I won't have to deal with those Boyz until later. And the pop-guns on the Wagon won't do too much to me." (sigh)

The other thing that hurt me on this mission was the weird diagonal deployment. You see, I've got a standard set of deployments that I've worked out for going both first and second. But the diagonal thing vexed me a bit. I hadn't practiced it or even really thought about it much prior to putting models down. So I wasn't sure what to do.

Going second, I would normally outflank the Stormies and maybe the Vendettas, depending on the opponent. But given the objective placement, I wasn't sure that outflanking would work well. Which turned out to be wrong. It would have worked quite well. But instead of following the plan (which would have had me avoiding the Lootas despite my brain-dead state) I deployed the Stormies on the board to my left instead of my right where they would have been most effective.

Long story short, he walked across the board at me, despite my killing his Big Mek with the KFF on my first turn of shooting with the Vendettas (lead from the rear buddy!). I sent the Hellhound in to break up his advance, but the Lootas perforated it in short order. As a result, he was Waaagh-ing into me with his lead elements by turn 2. Helped along by his consistently above-average rolling; while my own rolling was consistently below-average.

His Nobs, whether by accident or by plan, hit me first; with his more numerous Boyz following behind. This forced me to pour fire into the Nobs while the Boyz advanced unmolested; rolling up half my line from left to right.

Despite all these mistakes, the game was close. I would have pulled off a draw with a spot of luck and a minor win with a second. But Bin Lootin' was able to shoot one of my squads off an objective after his own 2-man scoring unit survived 4 plasma gun hits and a half-dozen lasgun wounds. Elsewhere a lone Nob survived combat with 4 =][= Stormies and contested another objective.

My only real spot of luck was that I had an immobilized, weaponless Demolisher hulk contesting the center objective at game-end. Bin Lootin' just couldn't kill it no matter how hard he tried.

So it was a loss, but I did manage to kill both his HQs and his most expensive Nob unit. So I was only 1 battle-point short of a draw. But I'd need a Massacre in the next round to have any hope of making the top 3.

List-wise, the Russ squadron did OK, but Vet squads in the Vendettas would have given me more punch in the late game where I needed it or let me bubble-wrap some of my tanks. My command squad also managed to stay safe, negating the need to reduce their bonus point potential in the first place.

Round 2: Space Wolves
I'll dub my opponent "Red Wolf" after his codex and a not-so-super helicopter from an 80's adventure show. Jan Michael Vincent > Barry Van Dyke, BTW. Coke or no Coke.

It really wasn't a very good list. At this point level, I would expect to see 5-7 Land Raiders, not 2.  But hey, at least it was painted. It also was the perfect target for a STORMTROOPER ALPHA STRIKE!!!

You see, Stormies in a Chimera can scout 12" before the game begins. Putting them in a perfect position to alpha-strike with 2 dice per melta up to my opponents' 4" line. Trouble is, I'd never gotten to test this prior to Ard Boyz; because I'd never rolled first turn against anyone with significant armor on the table. Only Nids and Orks.

So I finally had my opportunity! I put the Stormies down in the middle of my line and finished my deployment. Would he see what was coming?

Nope! I had him hook, line, and sinker. If I'd been a bit meaner, I could have put some meltas into the Vendettas and run them forward too. But I didn't want to hand him more things to kill than I needed to. 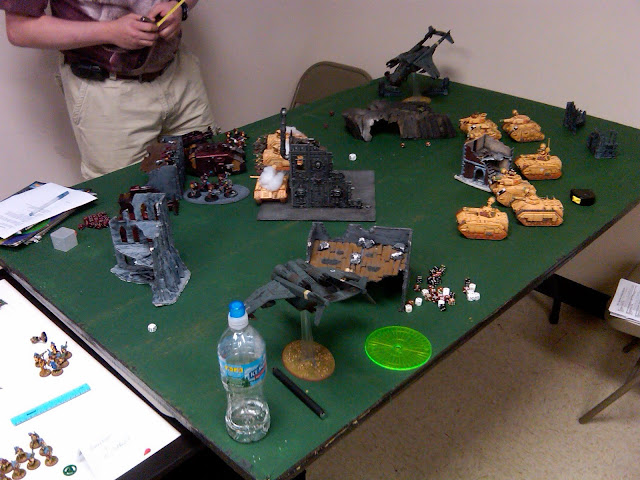 Two of the Stormie squads whiffed their melta rolls against the first Raider, but the third popped Raider #2 before it ever got to move. It didn't matter though. His 2 best close combat squads were blocked in and had to get past my Stormies and their Chimeras to get out of the kill box and advance on the rest of my forces. A better player would have done it by turn 2. It took Redwolf until turn 3; when he managed to move forward and kill the Leman Russ Exterminator before his Termies got torrented down.

My luck also returned to the mean. I rolled direct hits with all but 2 large blasts the entire game.

By the top of turn 5 he had only one small squad left in the building behind where the Land Raiders had started. So I was able to move scoring units into each table quarter and torrent the last few defenders down for a perfect massacre.

I only gave up about 525 victory points in the second game.

This victory shot me up to #2 in the rankings behind Farmpunk who had around 41 BP, and just ahead of Bin Lootin', who had about 31 after round 2. It also guaranteed me the bonus point in round 3 for having at least 3000 total victory points.

Redwolf was very good natured about his whipping.  We finished early, so he explained his own combo of doom which involved interlocking character buffs that would give his termies a really amazing number of attacks. His only comment about the Stormie-rush was that he didn't know Chimeras could do that.

Round 3: Farmpunk's =][= Mashup
And here we go, the match that Farmpunk and I really didn't want; because our games tend to be decided by who goes first more often than strategy or tactics. He rolled first turn and I failed to sieze the initiative.

Looking at this game in retrospect, I should have just reserved everything. But instead I tried to implement my anti-Leafblower plan; which was to hide my main-line Chimeras behind the Russes  and outflank the Stormies and both Vendettas into Farmpunk's flank. Problem is, Sisters aren't an IG gunline. They tend to move toward you instead of sitting back and lobbing Manticore shells.

The Russes weathered a lot a fire, but Farmpunk got lucky and stunned both Demolishers and immobilized one as well. He also stunned the Hellhound. This left only my Russ/Exterminator squadron to return fire.

They stunned a Chimera. Woopdedo!!!

So now my Chimeras were trapped behind my Russes. I moved them out as best I could, but the traffic-jam was lethal. 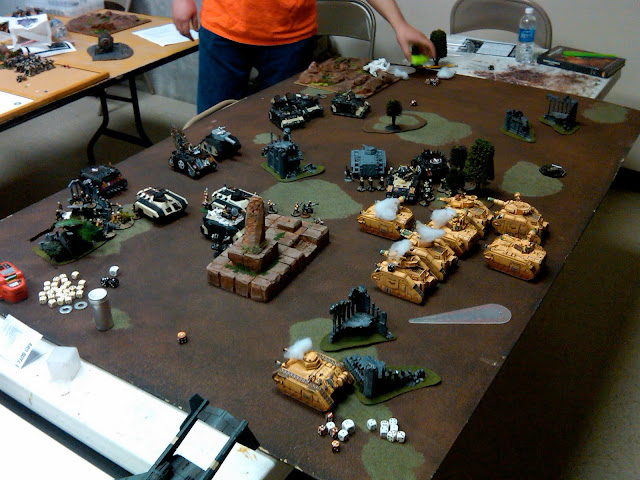 Top of Turn 2
And now we get to the evil-ness of this mission.

At this point I've got Sisters up in my face shooting melta guns at my tanks. Do I:

1) Shoot up the squads of Sisters, whittling them down to 2-3 models which still have their meltas? Or...

2) Put every bit of fire I can into his tanks for the chance of picking up 3 KPs each?

Yeah, I took option #2. I really had no choice at this point. I had to gamble on my ability to kill tanks. But I only kill a couple.

My reserves start coming in, and I compound my problems by putting the first Vendetta down in a spot that 30 seconds later I realize I should have kept open for my Stormtrooper Chimeras. So they end up coming in next to Farmpunk's IG platoon. Which I could flame, but which would only get me one KP even if they ran. So I shoot multi-lasers into the sides and rear of Farmpunk's Chimeras instead. I get shaken/stunned results. (sigh)

I bring in my Plasma Vets and some Melta Vets on my far-right. They have clear shots at a Chimera, but they whiff too. (sigh)

We got through turn 4 before we ran out of time. Farmpunk ended up with 28 KP to my 14.

Farmpunk didn't bother adding up my Victory Points, as I already had the 3000 VP bonus.

I was sure that I was in 4th or 5th place after this debacle, but when everything was added up I squeaked out a third place win. I'd tied with someone in Battle Points for 3rd, but I had something like 1500 more Victory Points than him (just from games one and two), so I took the prize. Evidently, the other games in round 3 had only been draws or minor victories.

So hey, I made it to the Semi-Finals; despite the mission fail and my own mistakes.

As for my list, having Vets instead of the small =][= Stormie squads would have let me bubble-wrap the Russes and Chimeras on my line to protect them from close-range meltas. So I'll go back to my original list for the Semis.
posted by SandWyrm at 12:44 AM