By The Grave Mind

So a few weeks into the summer and I'm already tired. I've been working full weeks, at two jobs, with random schedules. Some days I start work at 10am, others I end around 4am. I've averaged around 2-5 hours of sleep a night. On top of that, I have three 40k projects I'm currently working on. As you can see, the picture below is my first one. It's my gaming table. Now it is probably going to be another year or so before I actually have a table, but I have a 6x4 play-mat, and some terrain. The hills are from the South Game Preserve, since they were getting rid of them and replacing with new stuff. The black ones are my own creation, Tyranid terrain, that I will someday get around to painting. 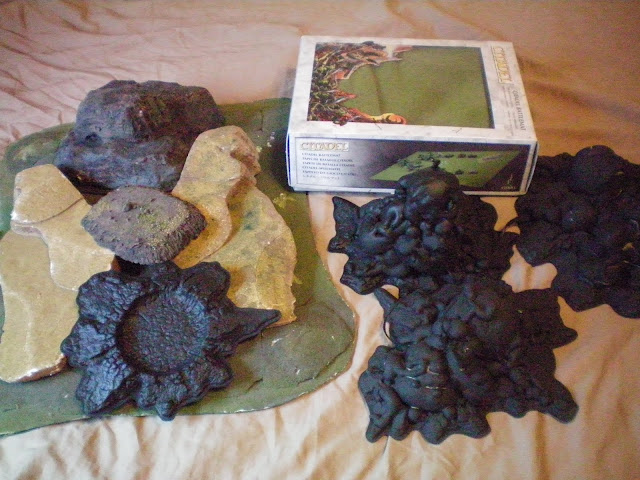 Since 95% of my games are at a Game Preserve location, this project is of the least concern. But I'm ready for change if it should happen, and it's something else for me to work on so I don't get tired of doing the same thing.

My second project is to finish Hive Fleet Zhuran. With the new codex, I have bought new models, and had to change old ones, which means building and painting. I've built everything, but painting isn't my Forte to say the least, so they have sat around for a while now. Coupled with that, I decided to create a display board. It's been a project in the works, and let's just say there is more than meets the eye to it. I'll update that more later, probably on my blog.

After doing This Blog Post, I was more motivated to paint some tyranids and see how they all looked. Well I painted my trygon and one of my Tyrannofexes....kind of. So tada! 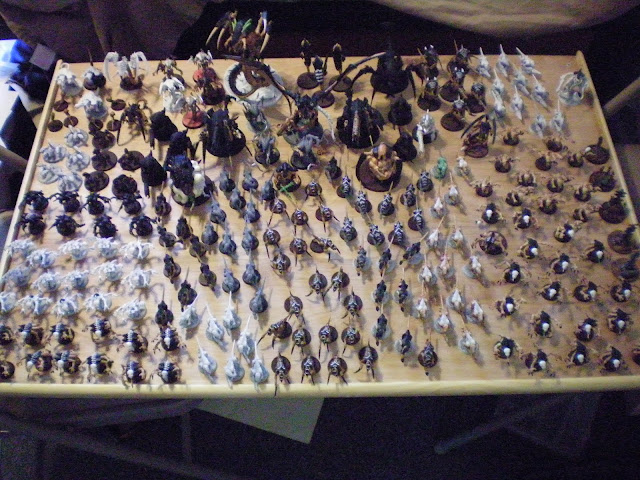 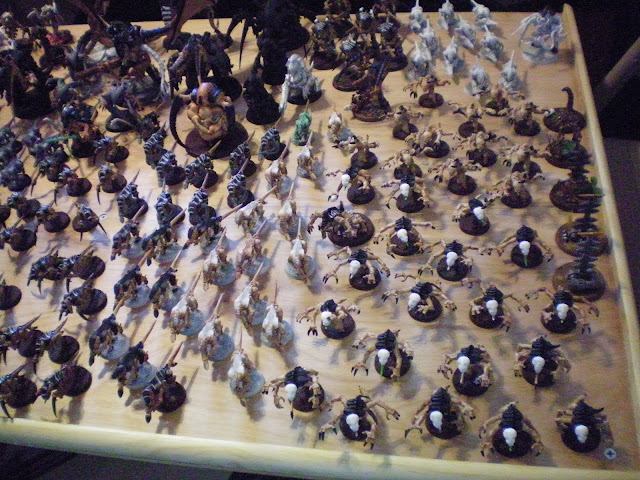 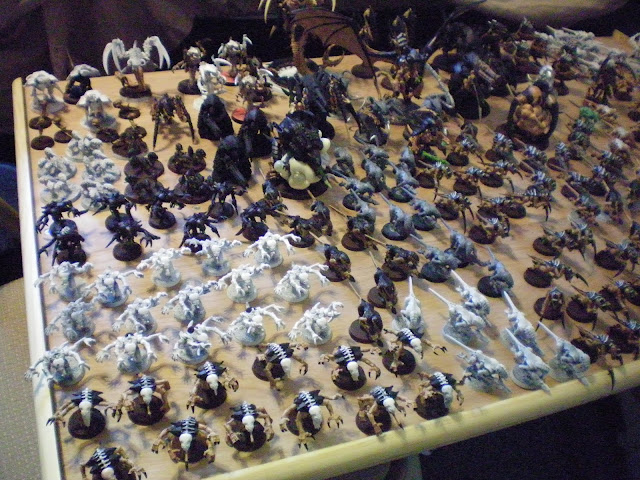 And my last project, has been strongly influenced and helped by Sandwyrm's series of posts. I've taken his Color Theory into deep consideration, and have attempted to raise my level of painting. To do this, I gathered my Chaos marines I've had laying around and decided to learn through practice. Now I know game wise they are nothing impressive, but my handful of foot infantry marines will eventually look pretty cool, or at least that's the hope. 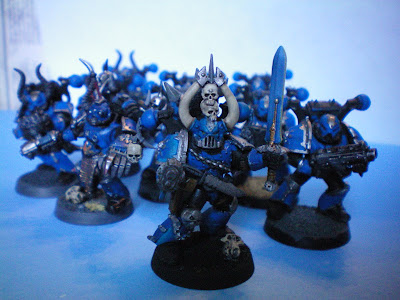 Not the best picture, but it shows what I have done. In front is the Sorcerer I just finished. It isn't as pronounced as I would hope, but I practiced a lot of fading on him. His shoulder pads fade to teal, then with an light blue highlight along the edges. On the sword I painted the center part gold to contrast the silver and blue, and I even put a yellow highlight on the edge of sword, followed by white so it looked smoother. According to the color theory, if I did it correctly and understand how it works, then the yellow/gold should bring more attention to the sword. This will be a useful technique for when I actually learn to paint a sword well. 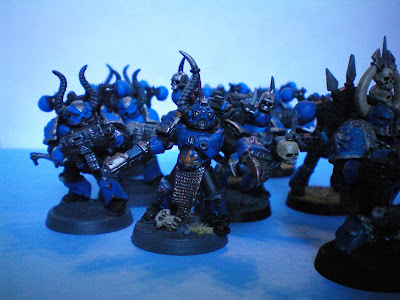 I don't remember if I've posted about my painted Chaos lord yet, but he was in the group so I figured I'd mention him. He was actually my first "fully painted" model, not counting test models which are not full models. He turned out far better than I could have ever hoped, and I went and finished his base to make it official. An ork skull, which also came out better than expected, and some grass finished him up pretty well. Sadly once I finish some other models, I probably won't be using him much, since his war gear and nurgle devotion don't work for me that much.

And so those are my three current projects, and you can expect some more updates on them as I continue working on them in my limited free time. I also need to start work on my next Tactical analysis post, but I need more games in for that.

Good luck to all of the Ard boys players that are moving on, and Congrats to the new kid Sandwyrm!
posted by TheGraveMind at 8:33 PM