By TheGraveMind
So while Gencon was going on this weekend I went to my first Tournament. There was relatively small turn out, but with a good representation of vanilla marines, dark angels, templar, blood angels, Tau, my Tyranids and others. I had decided to just bring my tyranids as I have them mostly painted and I'm still not sure what I want to do with my Blood Angles. And this is how it went... 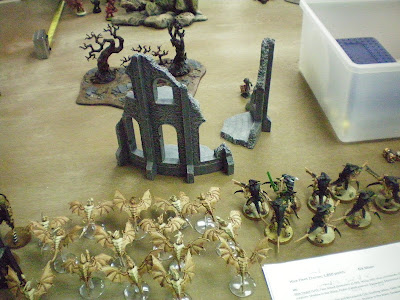 I won the roll to go first and after rolling powers, night fight (none) and warlord traits deployed up on my line and was ready to charge forward and not die to dreads. Trygon prime would be deepstriking, and ymgarl coming from reserves. 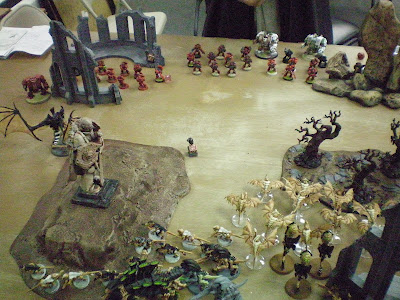 Hive tyrant swoops forward, and shoots at the dread trying to take some hull points off, but fails to damage it, Everything else just runs forward towards objectives. Tervigon poops out 6 gaunts and clogs, they run to the far left objective and camp it. 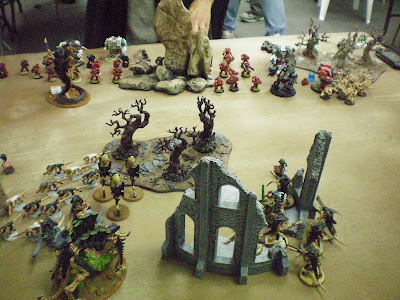 His entire shooting kills the gargoyle brood giving him First Blood, and puts a wound on my Tyrant knocking it out of the sky. He assaults with the dread but the tyrant blows it up before it swings. On my turn ymgarl jump out of the trees and take on a furioso dread, immobilizing it and taking off another Hull point, leaving one more HP to take off. Trygon scatters too far towards them, and will probably die next turn. hive guard immobilize one of the dreads by the trygon to help save him. Zoanthropes fire blasts and kill about 6 marines. 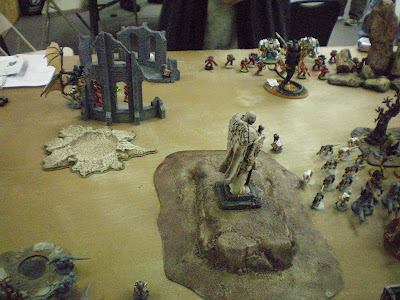 Hive tyrant switches modes, casts life leech and gains his wound back and then assaults into the squad. He will continue to roll horrible and stay in combat the rest of the game killing 1-2 marines a turn. 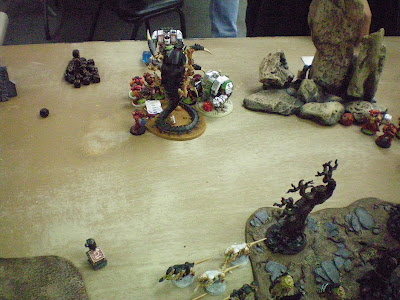 He casts enfeeble on my trygon, and so S10 Dread instant kills it in combat. We finish the last combat and then Dice Down is called. With no prior warning (timer had not been working) He had pulled his squad off the objective to kill the trygon. 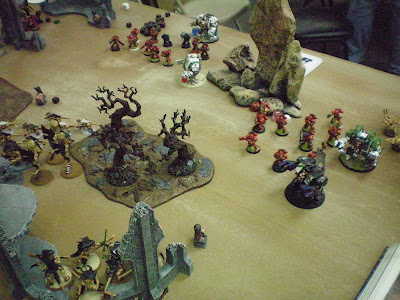 After talking and consulting judges, we agree he should still have the points from the objective he had just moved off of. But with my squads moving forward to the objetives earlier, I still won the game but it was a Major victory instead of a Massacre. Fine by me, as it was a fun and close game that if it had gone past Turn 2, would be completely in the air and depending on my zoanthropes and hive guard killing Dreads every turn.

Game 2 : Hammer and Anvil, Purge the xenos. Opponent: Vanilla Foot marines, 70 of them. 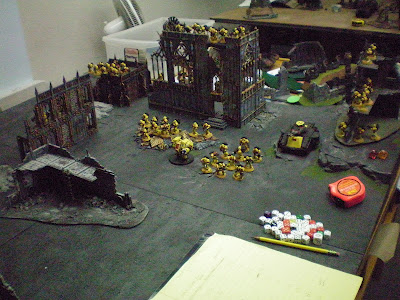 At least it wasn't the Tau O_o  5 Tac squads, 2 dev squads (10 man) a dread, predator and Captain. He wins first, and deploys in the tall ruins and is ready. 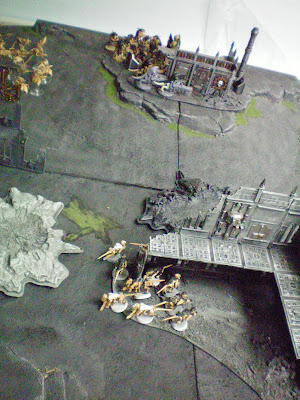 Warriors, zoanthropes and hive guard deploy in ruins clustered up. Gaunts huddle in ruins trying to not get shot. Hive tyrant, gargoyles and trygon are deep striking, Tervigon is outflanking (hive commander) and Ymgarl doing what they do best. 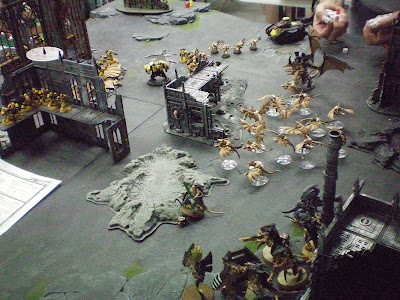 Two rounds of shooting see some warriors and hive guard dead, I've killed about 3 marines from Warp blast, and that's it. Luckily everything comes in bottom of 2 for me. Ymgarl assault marines and the predator, taking +T to survive overwatch (they are amazing!) 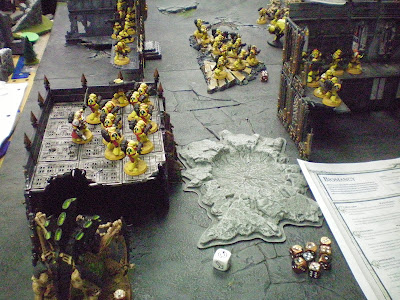 Tervigon comes in the far corner, so will have cover from most of his army. He will assault the tac squad there next turn, and try and kill the Captain. The trygon comes in the other corner, but doesn't have enough cover and dies to mass missile launcher. 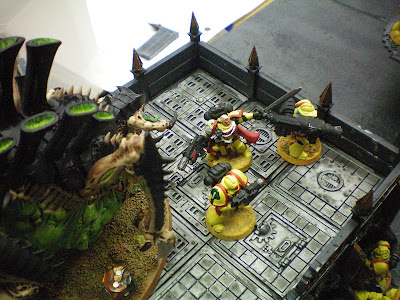 Tervigon tried to pop out gaunts to help swarm the squad, but made 5 and clogged, so they hid underneath instead, only to get killed by a flamer. End of the game only two guys left keeping the Captain alive, Couldn't kill enough fast enough. 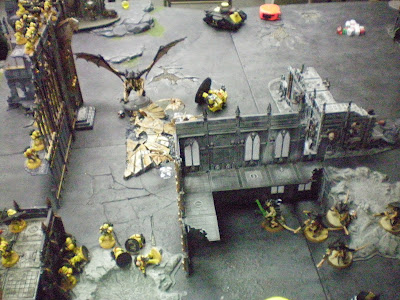 Warriors still never did anything as they kept moving through cover and poor run rolls. At least they lived. Trygon gave first blood, a scout squad came in and killed my back field gaunts, ymgarl got gunned down the next turn, and small gaunt squad roasted. I killed two Tac squads (Tyrant killed one last turn, after killing devs the turn prior) 1 Dev squad, and the Dread. So game ended 4 to 4 on KP, with first blood letting him win by one so a minor loss to me. I count that as pretty good considering deployment, KP mission and such stacking against me. It could be said the 5 man gaunt squad lost me the game, but I took a chance, had they been larger, they could have helped kill the tac sqaud with my tervigon, giving me 2 more KP, and pushing me to 1 ahead instead of 1 behind.

He won roll to go first, but there was night fight. I think he said he had never faced nids before with the tau, so He deployed pretty far back. I reserved the trygon, outflanked the Warriors, and ymgarl sleeping in terrain. 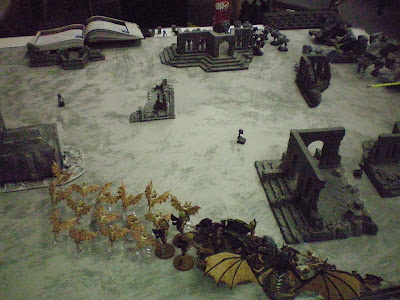 He killed a couple gargoyles, but with most of my stuff behind ruins with night fight I made the rest of my cover saves. 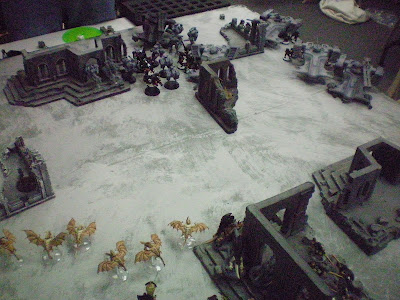 My hive tyrant swoops forward, and shoots the broadsides, Killing one, forcing moral test and they run off the table. Everything else runs forward. Hive tyrant was right in front of the lead Hammer head. You'll notice the absence in the picture, First blood and Slay the Warlord to the tau. He simply fired fire warriors and burst cannons into the Tyrant, which failed almost all of my "grounding" tests, and died from impact as opposed to actual weapons. That was almost 300 points down, and my reserve bonus lost. 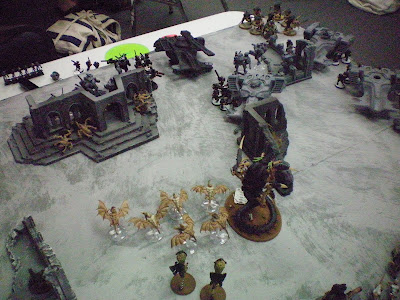 Luckily everything still comes in on a 3+, Tyrgon scatters back a bit which is ok, warriors come on behind fire warriors and kills half a squad (pesky 4+ save) and Ymgarl come in and he happened to have moved two suit squads into that terrain, so I chose +A and multi assaulted both squads (+T wouldn't help much against their guns) I took heavy casualties from over watch but managed to kill some in combat. (forgot about cover saves since I was in area terrain until like two turns later, so oh well) They held both suits there for the rest of the game, with 1-2 wounds being dealt to either side each time.

Hive guard blew up a Devil fish, Zoanthropes blew up a hammer head. His turn his entire army fired into the warriors squad. With the Alpha warrior in the lead doing LOS, and cover, it took every shot of his to deal with all 25 wounds in his back field. The very last shot did the last wound to the squad.

My next turn, the Trygon moved up and assaulted the Fire warriors, killing them out, Gargoyles assaulted the hammer head and did nothing, hive guard glanced the other devilfish. His shooting killed off some hive guard, moved and ran his last fire warrior squad onto his objective, and did some wounds to my Trygon.

I was sweating it as 15 minutes was called, I had 2 of the three objectives (spawned 9 gaunts on my back one, tervigon moved up to middle one.) and he had both first blood and Slay the warlord putting the game 2:2 in my mind. So him claiming his objective was the game breaker. He tells me I've already won this game, He explains to me that in this mission objectives are worth 3 points each, killing heavies are a point each as well. So I was actually 8 to his 2. With that I wasn't worried about his objective, I just focused on killing his Warlord (the big game hunter, who did the final blow to my Tyrant). My trygon enjoyed munching on the Tau commander and body guard that turn of combat, killing them all.

Results
So I have two major victories for the day, but with a minor loss I'm not sure how I'll place, but with few people I'm sure I'll get top 3 (two people even dropped last round due to time constraints). It turns out second, third and fourth were all tied, and determined by tie breaker. I end up holding first place a few points ahead of the rest. Over all a good showing with my tyranids, so I guess I should stop complaining about them for a while now. Just need to finish painting a few more and I'll call them done.
posted by TheGraveMind at 12:21 PM