Gav Thorpe Is Making A What?


While forcing myself to finally learn the full wonders of Twitter, I stumbled upon what GW Alum Gav Thorpe is up to these days. It seems that Gav is creating a fantasy wargame... on a computer... that looks like a tabletop fantasy wargame. There's an Inception joke hiding in there somewhere, I just know it.

Here's a piece of his concept art: 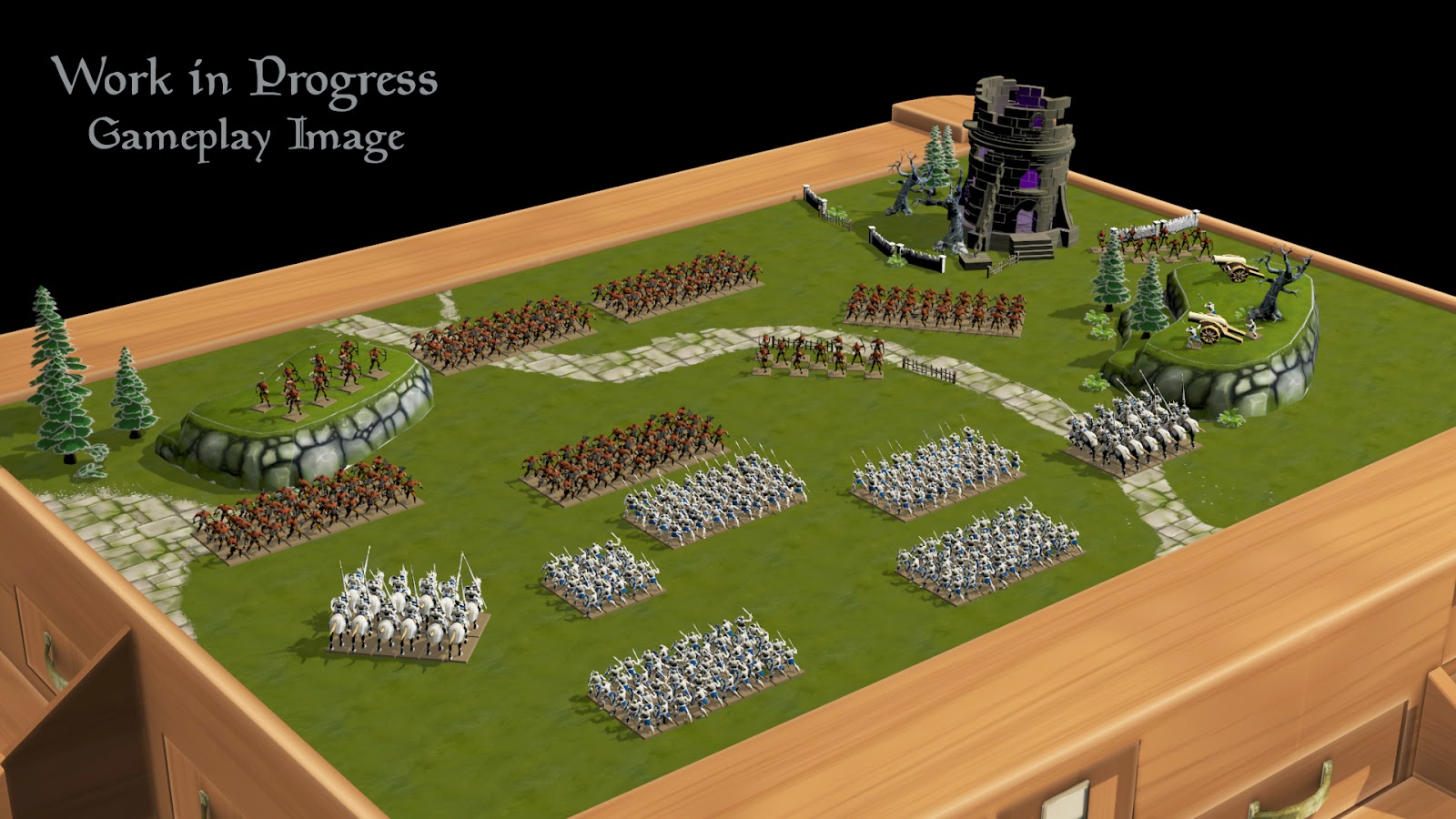 Neat idea, but it looks a little bit lifeless, to be honest. My Suggestion: If you're going to play around with the idea of a tabletop game within a video game, go all out! Which means modeling the environment around the table, and making it a part of the gameplay too.

Think of the possibilities...

Having just graduated from community college, you've got a shiny new call center job taking orders remotely for the drive through at McDougle's Burgers. FINALLY, you have enough extra cash at the end of the week to think about getting into miniature wargaming.

You manage to scrape up a 4' x 6' piece of particle board, which you paint bright green (mostly) from an old can of paint in the back of the family garage. For the tutorial, your 'miniatures' are a sordid collection of cardboard cutouts, half-painted D&D models, Lego mini-figs, and some Smurf collectible figures that you found in an old cardboard box from the 1980's.

Once the tutorial is complete, you get 'money' to spend on actual figures and a can of spray paint. Your minis aren't painted in 3 colors yet, but at least you have actual models to use, and they don't look silver anymore.

Pimping out your game room offers a whole host of opportunities for better-than-default modifications. From celebrity velvet paintings (Rick Priestly, Matt Ward), to nicer Ikea shelves to park your collection on.

You've got a better job doing night-inventory at local supermarkets now, and as nice as your game room is, you can only get a couple of guys to come over and play. So you wander into the FLGS to expand your social circle a bit.

Play is harder, of course, and you'll have to pony up for the bitz (DLC or earned credits) for full WYSIWYG on your models. Plus the dreaded Comp will appear. Limiting your army-building choices even further. Can you win within the social norms of the store?

At first, you'll be forced to play in dimly-lit back of the store. Where the normal people that walk in to buy boardgames won't be forced to see (or smell) you. But after you've painted most of your army, and acquired enough hygiene points, the owners will let you play up front by the big picture window. Where the women from the H&R Block office next door might wander over, to see what all the excitement on the other side of the dividing wall is about.

Work on your hygiene some more, and the women that walk past the window on their way to the high-end perfume/makeup big-box might actually acknowledge you with a look.

Not only are you winning most of your games at the FLGS, but you've managed to land a few dates too! Feeling high and mighty, you march into your first tournament!

Play goes up a few notches and after a few local events, suddenly all of the Comp nonsense goes away. It's now the wild west buddy, and you'll have to embrace the cheese-o-the-month to win. Models LazyShop™ likes to drop new rules and models without warning though, spoiling your careful plans before each event. So be prepared to switch gears quick!

Fortunately, your new girlfriend is an accountant. With her helping to manage your money, you should be able to almost afford the newest power-models. Her uncle also took a shine to you, so you're now a day-manager at the local Quickie-Mart.

Movin' on up! But you'll have to balance your tournament practice and game spending against her demands for us-time and expensive trips to wine country. :)

As you win games and your reputation points increase, you might get invited to help "play test" a big tournament's missions. Or become buddies with the TO. The 'good old boy' points you earn here will pay off later when the Live-Cams at the top tables catch you 'forgetting' a rule or two in your games. Or when a buddy realizes that you've 'modified' some miniatures that you borrowed from them for that extra edge.

A slinky new outfit for your girlfriend to distract your opponents at the table with. Books on social engineering so that you can ramp-up your opponent's anxiety at key moments.  Professional painting services so that you can win 'Best Painted' or 'Renaissance Man' without having to do all that work yourself.


You're now the regional Quick-E-Stop manager, so your credit limit is high enough to consider international travel! Spend Rep and GOB points freely to ensure your place on the national team!

You'd better butter up the girlfriend with a marriage proposal though (and an expensive gift or two), or she'll get tired of you never being there real quick! Lose her, and your teetering financial house of cards will come crashing down around you! How long can you survive on Ramen noodles?

But enough negativity! Gotta keep your eye on the prize, because the winner of this tournament will be offered a game design position at Models LazyShop!!!

(Which could be turned into a whole other game...)

Cheekiness aside though, my advice to Gav is to take this game concept to the next level with some personality. You're not going to beat Rome: Total War on gameplay by recreating the tabletop Fantasy experience on a computer. So unless you're going to license Game of Thrones or something, you'll need an interesting new take in order to stand out. Feel free to steal any of these ideas if you want.

Oh, and you can follow me on Twitter here. Where you can see Gav's humorous replies to this article.