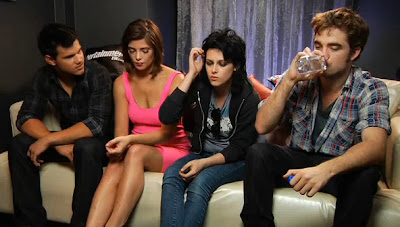 I had a good game tonight vs. a North Store regular who I'm nickname "Notdog". He had just won a game with his Nids and wanted to try his luck against the Emo Wing with his Space Wolves.


Of course, this immediately brought out the "Twilight" jokes. We even tried to find a proxy for Bella to fight over, but while Foodie was there with his Dark Eldar, he hadn't brought his slave models along. Damn!

I ran the usual 2K list. Here it is for reference.

Notdog was running the following:

The Runepriest was riding with the Wolfguard, who split off 3 models, one to each Grey Hunter Squad. Giving them 2 Fists each. Looking at Notdog's list, I'm kind of amused that I had more models than him. :)

Once again, I didn't take any pics until the end. Part of the reason is that we started late and were in a rush. The other is that I wasn't sure how well I'd do against 4 Raiders.

The mission was a Capture and Control with a Pitched Battle Deployment. I rolled first turn but gave it to Notdog. Here's the aftermath at the end of turn 6: 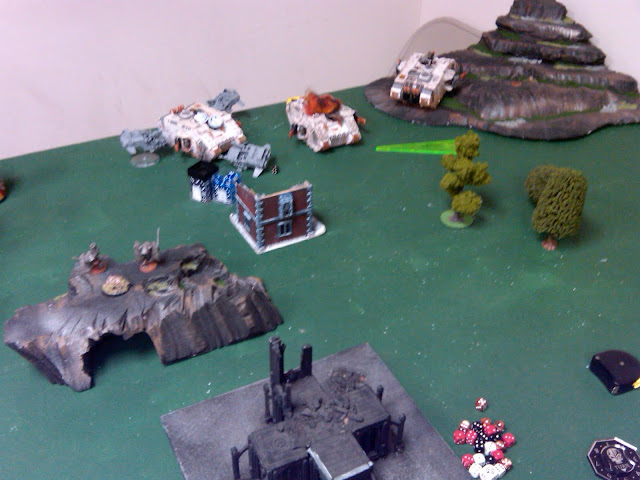 That's me holding an objective in the center with a lone SangGuard and a SangPriest. While Dante stands alone next to the other objective. Giving me a 1-0 win. 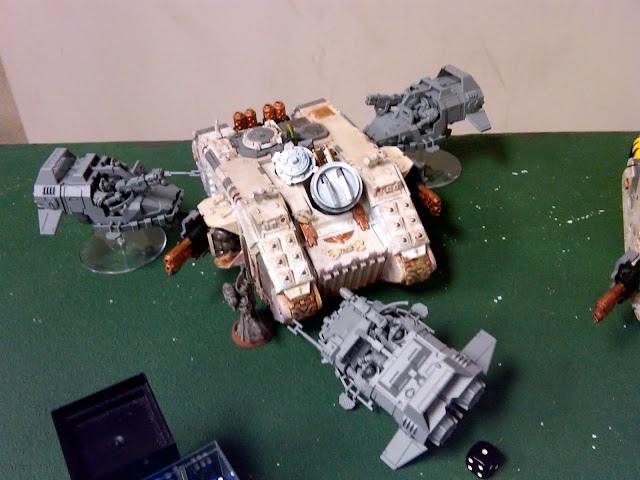 There's a Grey Hunter squad in this Raider, but it never was able to get out. Notdog tried ramming the speeder in front, but failed to damage it. He shot it up later, but only immobilized it. 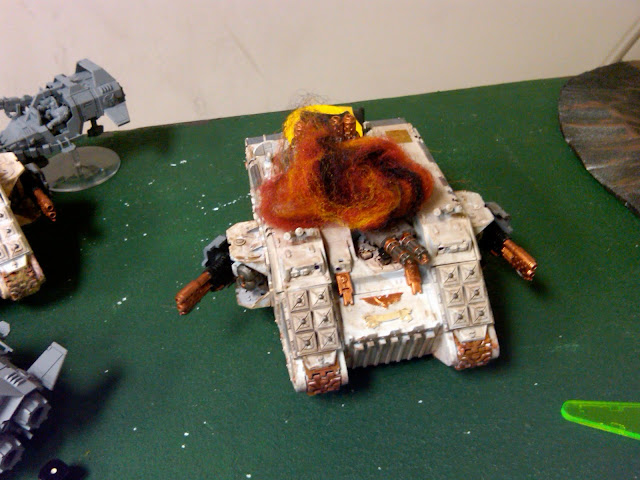 This Raider was wrecked with a ring of SGs around it; auto-killing the Grey Hunter squad inside. It's the first time I've ever been able to pull off that trick. :) 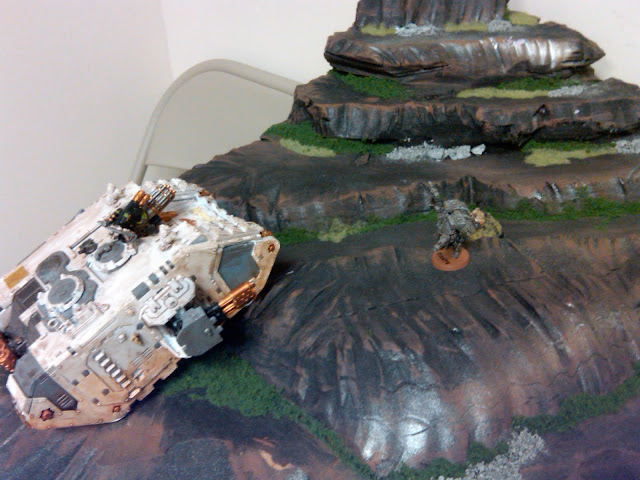 I thought that Notdog played pretty well (as the body count will attest), but he did make a major mistake here that cost him the draw. This Raider had been sitting on top of his objective, but Notdog disembarked the squad inside and ran this Raider down the hill to shoot the ring of SGs around the wrecked Raider.

Now, he didn't need to move to shoot me up with his Melta and Assault Cannon, so I'm not sure what he was thinking. But I was able to jump 2 squads past it and assault the Grey Hunters who were now out in the open.

I was a bit too far away with Dante's squad, so I couldn't charge the 2 squads in together. This allowed NotDog to take advantage of my crappy rolling and wipe out the first squad in 2 rounds of combat. But then Dante's posse charged in and I won the combat by one wound.

There were still 6+ Hunters in that squad, but they failed their LD test and Dante ran them down. I won with 3 Speeders and 3 Infantry (one scoring model) left alive.

Conclusions
A lot of guys on the interwebs dismiss Sanguinary Guard because they lack an invulnerable save, but I'm convinced that this is more than made up for by their sheer speed. If you know what you're doing you can pull off all sorts of tricks that Terminators can only dream of. All while shrugging off most  anti-infantry fire. "Oh, you have AP3 Flamestorm cannons? That's nice."

This is also the first game where Mephiston really showed his fangs. I like guys that can kill Land Raiders with their bare hands. :)

And lastly, Speeders rock!
posted by SandWyrm at 1:13 AM