Stealing the Win (and the Battle Report) 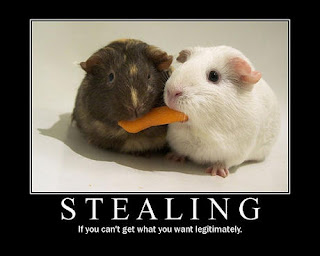 Last Thursday I broke back into 40k after taking a break, and while I am still not looking to get involved in any hard tournaments I found my self looking forward to this next match with anticipation.
Chosen1 from the blog “Team Snake Eyes” (http://teamsnakeeyes.blogspot.com/) has recently moved into the area and is playing one of the better looking Salamanders armies that I have seen. Honestly his pictures don't do much justice to the models. Anyway back on topic, rather than post a battle report I will just steal his. My comments are added in blue.

-snip-
While there, however, I made arrangements with Chambers, of The Back 40k fame, to play a 1500 point game this Thursday. You see, he had an army he bought off a guy, you may have heard of him...Ron Saikowski of +From the Warp+ (http://fromthewarp.blogspot.com/). It wasn't just any army though, that wouldn't make a good enough story. This was Ron's old Lustwing army. If you haven't seen it, follow the link and check it out. Go ahead, I'll wait. You see?Absofrigginlutely gorgeous. I HAD to play this army. End. Of. Story. He used the Space Wolf codex for these guys as there is no option to run all chaos terminators
I can't even run all terminators with Daemon support like I could in the last codex, cause that would be way too powerful. Now if I were bump the cost up by three points and drop a point of Ld that would be underpowered, so we better give them ATSKNF, counter attack, AS and better standard gear plus more options. I really do hate this current Chaos codex., any way enough ranting. 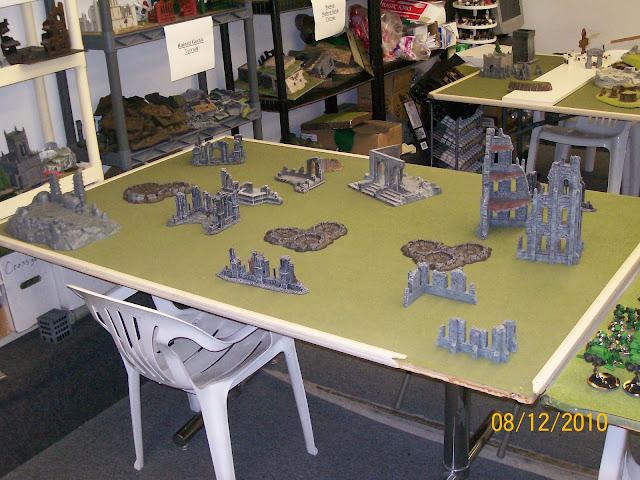 Our table had 25% terrain and wasn't anything too special. My list was changed up a little bit from my usual 1500 list since I'm trying a few things out to see how they play. I had a librarian (null zone & fury of the ancients); (2) Tac Squads w/power weapons, multi-meltas, flamers, & rhinos; (2) MM/HF dreadnoughts; (2) MM/HF Landspeeders; (5) TH/SS Terminators w/ Land Raider Crusader w/MM; and a Vindicator. I'd love to tell you what his list was, but I know squat about the Space Wolf codex...as in I just bought the dang thing tonight.
The List I ran was as follows:
Lust Wing
HQ: Logan Grimnar, The Great Wolf (1#, 275 pts)

Total Roster Cost: 1496
A few notes on my list, the two IC went with the ten man squad there by having each squad conform to the sacred number. However in doing so I ended up just shy of 90 points light hence the Lone Wolf. This is also the first time that I have run a large squad of terminators, or to use Jaws of the World Wolf. I really like the big squad of Terminators, the durability alone might be worth the loss of my fourth scoring unit. As much as I liked the ten terminator squad I disliked JotWW, I can see the value of this power on several cheap Rune Priests joined to squads. However I think that my list lacks the necessary moblity to make the most of said power.
We played an annihilation mission and he had 5 kill points to my 12 if that tells you anything. He had (2) six man squads with missile launchers, a ten man squad with wolf lord, a rune priest, and a lone wolf (I think). As I said, we played annihilation with dawn of war deployment. He deployed his two six man squads, and I left everything to come in on my board edge first turn. He went first, and here's what the board looked like. 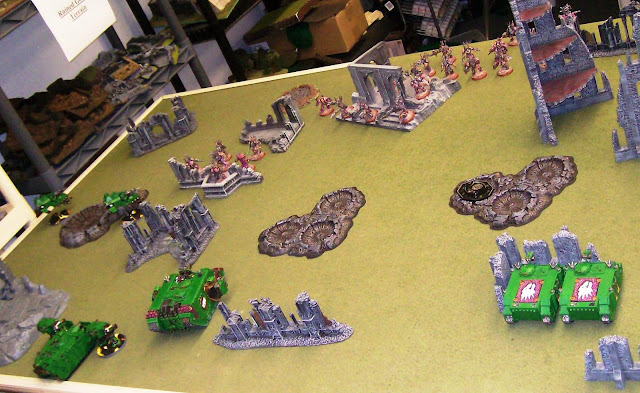 Nothing too fancy here. Like an idiot I split my forces again. I might learn, but one would think I would have picked up on it before now...Speeders pushed forward 24" on my left, tac squads sat right where you see them (doing nothing) till turn four, while the dreads, vindicator and landraider made mischief in the middle.

I disagree with his last statement. I don' t think tha tit was a bad idea to place the TAC squads off on a flank at all. As will be shown later the humble bloter and flamer are great weapons when used in mass against terminator armor. Rather I think that his mistake was hide the TAC squads in an attempt to deny me four KP. 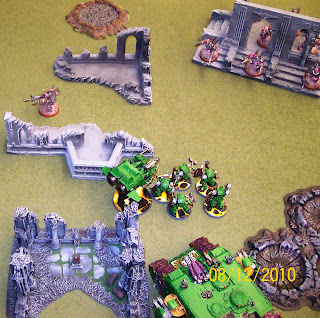 Turn 2 I moved up my terminators to intercept his lone wolf, which was his plan. I flippin hate those guys. You don't get anything from killing them, and if you ignore them for the kill point they run all over your army. Nice.

Honestly it was my plan, he didn't have much to deal with the Lone Wolf besides his terminators. I don't have a lot in my list that can reliably crack open his Land Raider besides a couple of combi-meltas, thatI did not want that close to his hammer unit, and unther his guns if I whiffed a couple of melta shots. 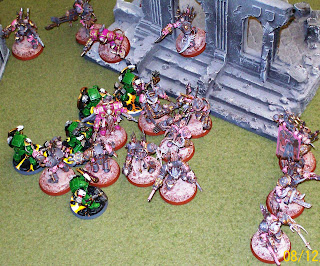 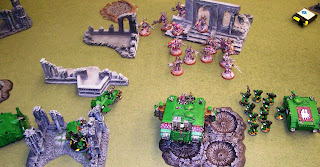 The next few turns saw my terminators and their librarian owned by his 10 man squad with a wolf lord in it. Absolutely sick. Seriously, there ought to be a law. What you see in the above picture is evidence of my public shame. (1) Vindicator, a point blank land raider crusader, (1) tactical squad, and a rhino shot at that squad. Plenty of hits, plenty of forced saves...I killed three of them. That's pretty much how my night went in a nutshell.

If I remember correctly all three died to bolter shots, one to the Crusader and two the TAC squad. I had written this unit off after rolling a “one” to consolidate, but when the dice are stupid hot nothing else matters. 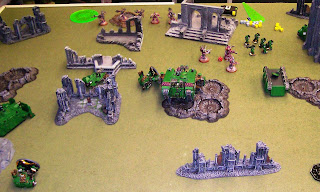 At the end of the day, while I had killed quite a few of his terminators, I only gained 2 kill points. Chambers had 9. It was an uphill fight from the beginning, my deployment wasn't ideal, and Chambers played a smart game. He was a fantastic opponent that I won't hesitate to play again and I got to play against an army that I drooled over on the internet. Ironically, my librarian HQ was converted by Ron, and died like a little #$%^ before he could perform. So while I learned it's probably worth while for me to equip myTac Sgts. with power weapons, I still have doubts about power armored librarians...and no terminator librarians to try out. It was a tough night for the Salamanders as a whole but my biggest failing was not having a decent camera to take better pictures. You just cannot imagine how beautiful this Lustwing army was.

Take home messages? Play Space Wolves, they're better than you are. Seriously though, that is one tough codex, and Loganwing is no joke either (for my typical army build anyway). I made a few mistakes, but none were truly epic. A few different choices and I might have earned a few more kill points, but I would have needed to table this army to earn a win and that would have required Chambers to fail just a few of those 5+ invulnerable saves he was making. ;-)

I had a fantastic time, there is something about two fully painted armies and a board that makes scene that really drives home the narrative feel of this game for me. To top it off Chosen 1 was a fantastic guy to stand across the table from and while it is the net-norm to complain about die rolls, my rolls were so far off of the norm that I really started to feel bad. However Chosen 1 just laughed it all off, and kept going I think that he took it in better stride than I did. I can not wait to play a rematch game, where I fully expect to be tabled on turn two. Laws of averages and all that, yes I know that's not how probability works – lets call it Karma instead then. As per normal my nominations for the MVP of the game and The Goat; the MVP would have to be the combi-melta and power sword terminator who passed some thing like 5 or 6 5++ saves and many more 2+ saves. That one model alone was responsible for my main line not falling. As for a Goat, I don't have anyone this game every model did it's job and over preformed.

Oh and he is right about Space Wolfs it doesn't matter who you are they are better. I mean how can you argue with a bunch of mead swilling hedonistic supermen who are only still part of the Imperium of Man because they haven't sobered up yet?