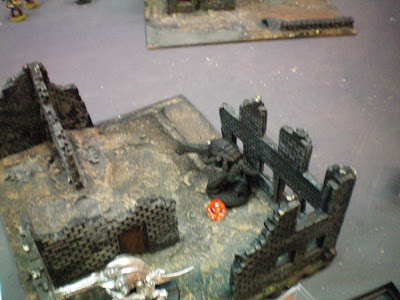 I played my first game of Kill teams on Sunday. There were only a few people who had their full armies there, so after a while we gathered the people who had enough for kill teams, and it ended up being a 3v3 kill team game. Three Nid players vs 2 chaos and 1 BA marines. Yes, I had my Nids out that day, Seeing as my Marines are on the work bench.

I was limited on what I could field, as I only brought my 1.5k tourney list. I had gotten a Game in against the Magician's Deamons. I won the game, but as it was put, his dice beat him, not me. And it is true, but also the way deamons are. I shot four shots from two hive guard, hit and wounded with all four, and he failed all four 3+ armor saves on his Blood thirster. His skulltaker was the last model to come in from reserves, so I was able to brace and bubble with gaunts.

Originally for the kill teams game I was just going to use Death Leaper, cause I thought would be awesome, and maybe not that great but fun for sure. Well we read through the rules, and you cannot use reserves. Great! that means all forms of Lictors are out, and they are our iconic Kill team unit. All I had was gaunts and hiveguard. Well 4 hive guard are exactly 200 points, I went with that. After two rounds I realized I had no synapse and should have been testing. With that realization I looked at the codex after the game, and man, Nids now suck in Kill Teams. We can't use Lictors, and most things need synapse. Pretty much there are only two main options. Genestealers, and Warriors. The other two players both had warriors, so we ended up with a draw, because three wounds can suck up so much. Genestealers aren't that great, cause now they only have a 5+, so they hug cover, so they have Imitative 1 on the charge.... fail.

The best thing you can field is Doom of Mal, but then you get yelled at for cheese. And don't forget to give him Eternal warrior to make him broken. If I ever play kill teams again, I'm probably going to try out yrgmal stealers, cause I just remembered about them, and they might actually do well. The other options is to work on some Marines, but that kind of defeats the point. 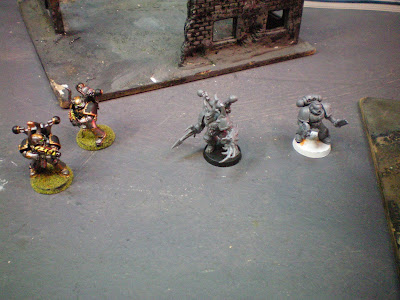 So I find it silly that a new codex like Tyranids struggles so much with Kill teams, while an old codex like Necrons is pretty much unbeatable. FYI, just take 4 fast destroyers, and hit the easy button.

So overall Kill teams is a fun game variant. When you have 1v1 it is an awesome quick little game, that can give great character to some of your models. It is something I definitely want to try out some more, and maybe use to introduce my friends to the game with. What are other people's experiences with Kill team?
posted by TheGraveMind at 9:08 PM