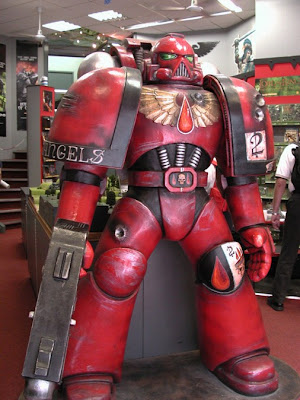 Well, here is my review of the Space Marine game. It is a little late, but we'll just say I've been busy with school. I'm not one to normally write a review for a video game, but I'll try and keep in brief and concise. I had rented it for a week, so I'm writing as someone who has not fully played through the campaign or mastered the Multi-player.


Basically, they took the shooting and grim from Gears of war, the combat was some what like God of war, and the multiplayer played a lot like Call of duty. They took the concepts of the big hits, and used them as templates. The controls were easy to pick up and play, and the graphics were good. A lot of the conversations turned into cut-scences, and there were a lot of panning shots that showed off the environment. These are not really bad things as they help introduce people to the world, but can get annoying.

The plot isn't very deep, Orks attack, space marines defend and discover Chaos behind things. Obviously this is a game you play to kill things, not learn about the plot. While there were shooting and combat attacks, unlike games like Halo or Call of Duty, shooting is not as dominant. Space marine does a good job of balancing Melee and Shooting. At first you want to just charge in and start swinging, but you really have to learn when to wait and shoot or you will soon be overwhelmed. 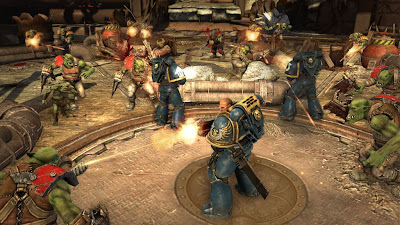 Two things I didn't like about the campaign was that you couldn't get rid of the bolter, and that there was no real co-op. At times I had Meltagun, Lascannon, Stalker pattern bolter, Bolter, Pistol, grenade launcher all infront of me in a weapons cash. I get that the Bolter is a signature Space Marine weapon, but really it was the most lacking of my choices and I pretty much needed the Stalker to pull headshots, which only left me with one option to keep switching between special weapons. I am a Space Marine Captain, give me some slack or make it a Storm Bolter. I also think if they do a sequel to make it more of a squad of Space Marines, allowing up to 4 people to play campaign. That is one of the features I love most in games.

The Multi player was a lot better than I expected it to be. I didn't play too much as the Xbox version required you to download some expansion in order to progress past level 5 ranking. First levels unlock devastator, Assault marine load outs, and then new weapons for classes. While the missions were a little basic, they were fair and balanced and played well. One complaint is the Jump pack for the assault marine, I had never figured out if it is distance traveled or how the fuel is used. While you can kind of tell by the intensity of the exhaust/flame coming out the back, a recharge meter or something would be nice. 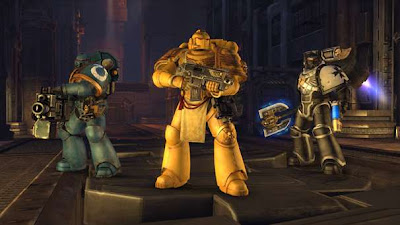 In multiplayer you are either loyalists or chaos marines. I really enjoyed the customization available for the marine skins. They had tons of the well known chapters for both sides, and many armor variances. You could take the time to completely design your own color pattern for each army piece if you'd like, though the color interface was a little lacking.

So overall I think it is a fun game, but most likely to rent unless the Multi-player becomes a big deal. Hopefully a prequel will fix up the Co-op and make the campaign a little more interesting and have a better replay value. It has made a good transition from table top to video game.
posted by TheGraveMind at 4:15 PM