Look And See: What GW Could Be 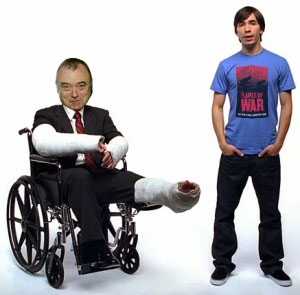 Let's talk websites. Specifically, what Battlefront does with theirs vs. the fail that is the Games Workshop website. 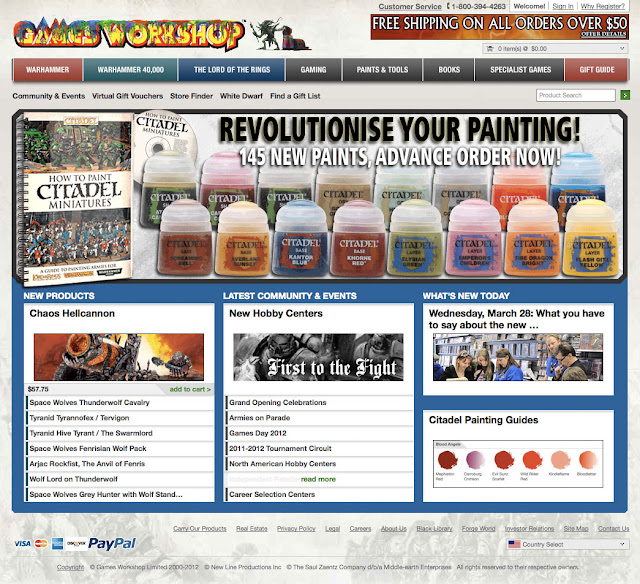 It's very "BUY! BUY! BUY!", isn't it? Maybe if we click on the Warhammer 40K link, we'll get some more focused content. 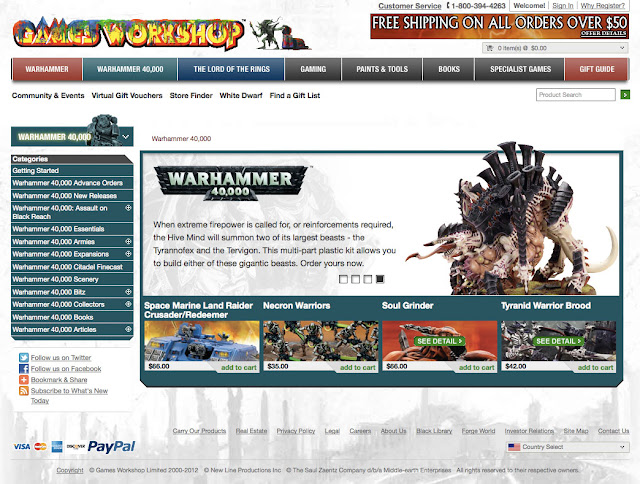 Well, we get a more focused selling page at least. As every picture and link leads to a catalog page with nothing but a little paragraph of text to sell it.

As for new products, there's aren't very many. We have the relatively new Tervigon/Tyrannofex kit, a Finecast version of Canis Wolfborn, and the new Thunderwolves. That's it. Everything else that's being showcased is old product. Some of it is more than 10 years old. For a miniatures company that also does rules, they don't seem to be all that into making/releasing new models. What are we down to now? Two new codices a year? Cutting development staff will do that.

Where's the non-catalog articles for 40K? Oh, they're not in this section. That would be too easy. No, they're over in the 'Gaming' section. 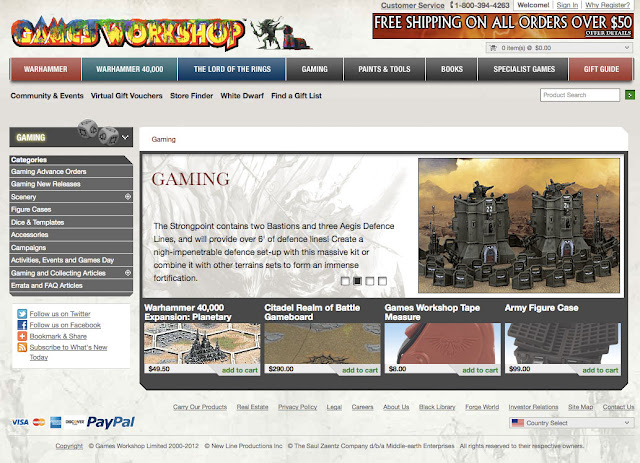 Where we get still more catalog pages.

There are in fact, only 2 links here that lead to non-catalog content. The second, 'Errata and FAQ Articles', is really only a shortcut to a section of the first. So let's click on 'Gaming and Collecting Articles'. 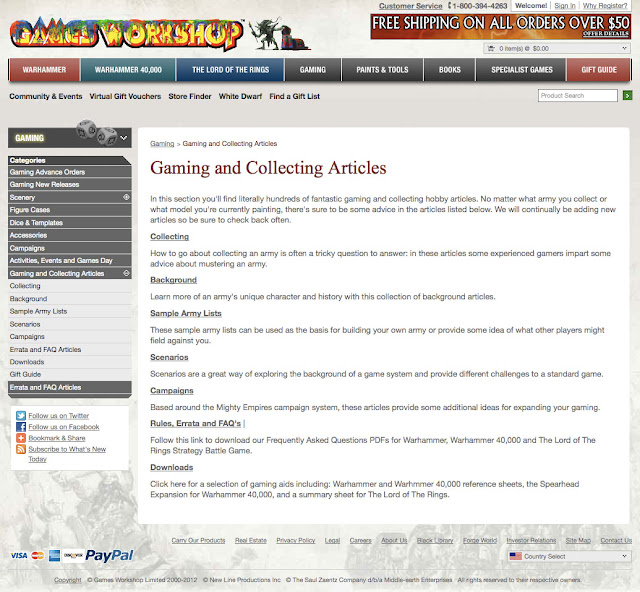 Under 'Collecting', this is what we get. A 'Gift Guide' that just provides more links to the catalog, and some articles on collecting Space Marines and Empire. It's so nice to see the rest of the factions so well represented. Look at the dates too.

Hey look, under 'Background' we get exactly one article. From 2008. Joy.

Under 'Sample Army Lists' we get more content. But it doesn't cover even a quarter of the factions for any of the games. The last update was over a year ago. These aren't additional sections either, they're single articles.

GW probably cut back it's web team to the bare bones over a year ago. Under the excuse of nobody looking at their content. Which nobody could find in their badly designed site.

'Campaigns'. Is anyone still playing Mighty Empires? I didn't think so.

Here, of course, is the only reason any of us visit the website. To get the latest FAQs. 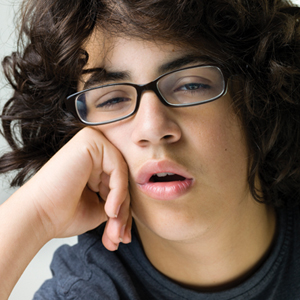 Would this company still exist if it wasn't for the Black Library and Forge World?

Now let's look at what a gaming website/store SHOULD look like... 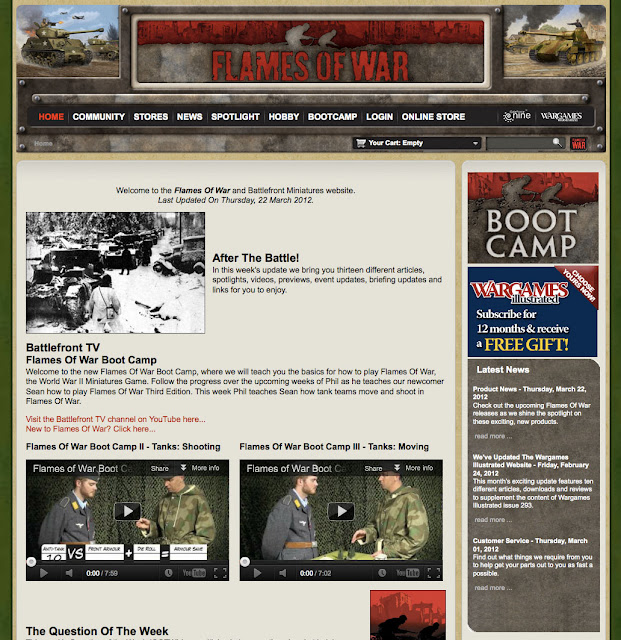 Hey! There's so much stuff on the front page that I actually have to scroll! 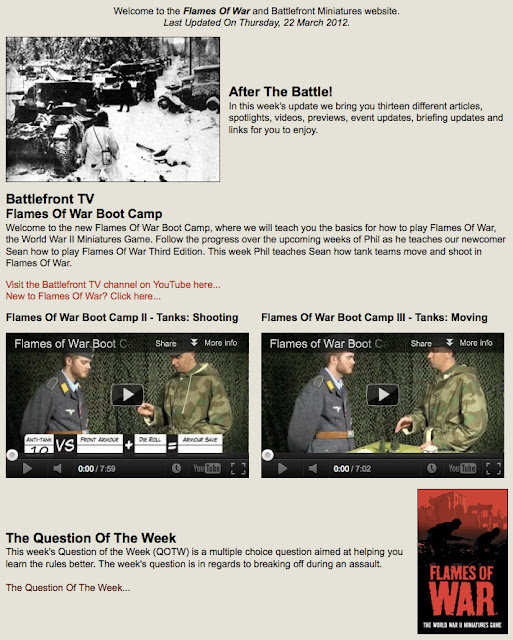 They tell us when they last updated the page. That's nice. Then they describe what's in this week's update. Yep. They update every week.

First up they have a link to their YouTube channel, a link to a page of articles for new FoW players, and a couple of embedded videos that describe the basic mechanics of Flames. It's like they're trying to attract new players to the hobby or something. What does GW do? It raises prices to deliberately shrink the player base and make it both more 'elite' and marginally more profitable.

We then have a clever link to the Forums to encourage people to go there. Forums? What's that? 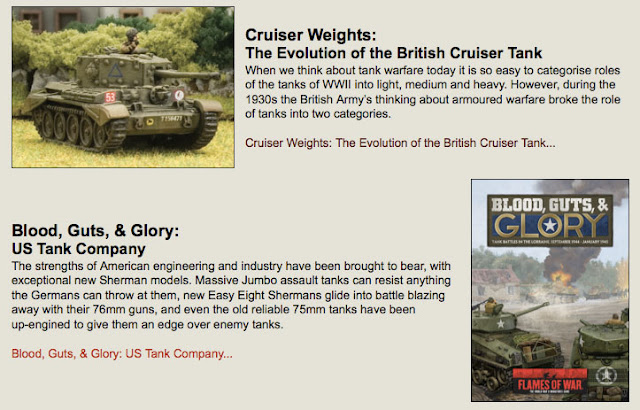 Then we get a nice long article on the classifications of various British tanks. It has a purpose, of course, of increasing players' interest in running something other than cheap Shermans from the Plastic Soldier Company in their British lists. Smart.

After that they give us a tantalizing glimpse of their upcoming American/German rulebook for late war. Look! Here's all the units you can buy now to use later with this book! Excited yet? 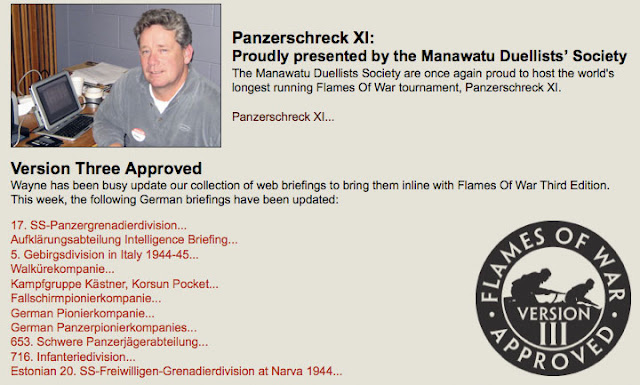 Next up is a link to a tourney that's run by a different organization than Battlefront. Yes, really.

Then we get 11 free German army list PDFs that have been updated for 3rd Edition. These are all that you need to play with your models. BF knows that these lists are an important tool for pulling players into the hobby. Who will then buy their other models, books, and terrain. 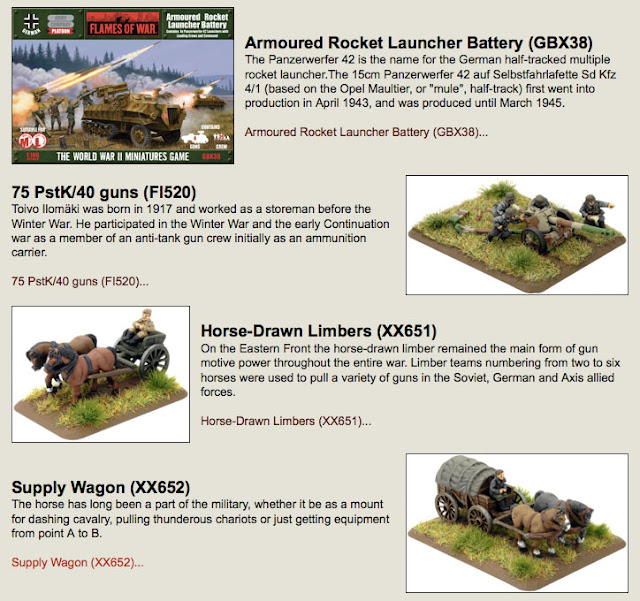 Four new releases this week! All for stuff in previous books. The Rocket Battery is nice because it pulls together a lot of stuff that you used to have to buy separately at a higher total cost.

These are also remarkable because they not only include background info and pictures; but also instructions for assembly. Which is something that BF customers have been wanting for some time. It's the number one problem with their models and they're addressing it properly. On the front page. 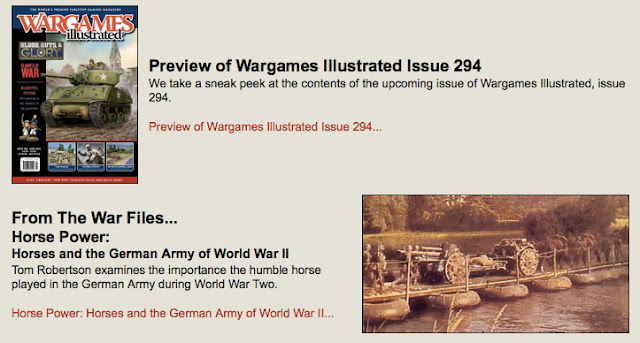 Hey look, they have a hobby magazine too. So they update the Website IN ADDITION TO the mag. What a concept.

And... Just in case you're like "Horses? WTF?", they provide another long history article that explains how over 75% of the German army in WWII was horse-drawn. They're not just releasing the models and hoping for the best (cough... Pyrovore... cough), they're SELLING them. 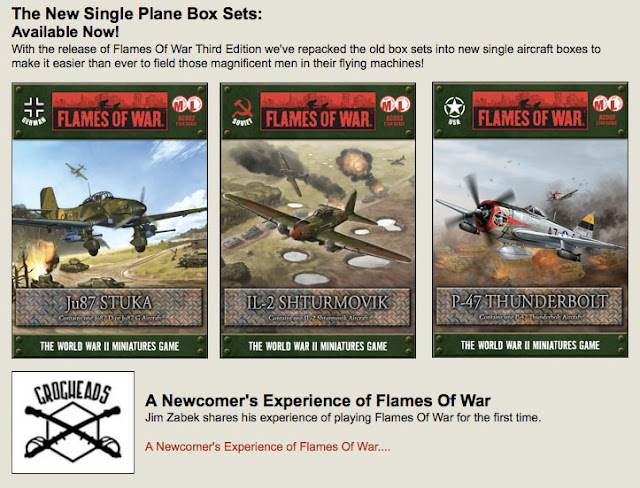 The 3rd Edition rules reduced the number of airplane models that you needed to represent air support from 3 to 1. So here's the repackaged kits. Airplanes now cost you $17.50 instead of $45. What a concept! Reduce the price and sell more!

After that we get a link to a fan blog. Yes, they're actively using their community to sell the game to new players. 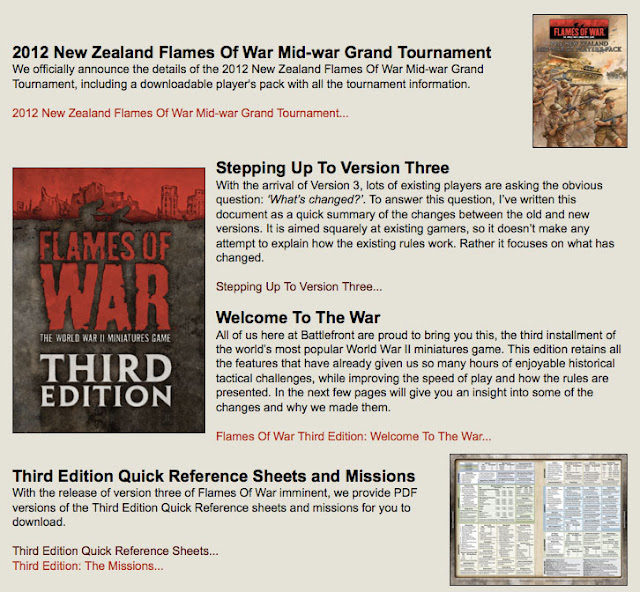 Next we get some tourney info for an event in New Zealand. Followed by more introductory articles and some free reference sheets that help you remember everything in the game phase-by-phase. Man, they're really pushing this new player thing. 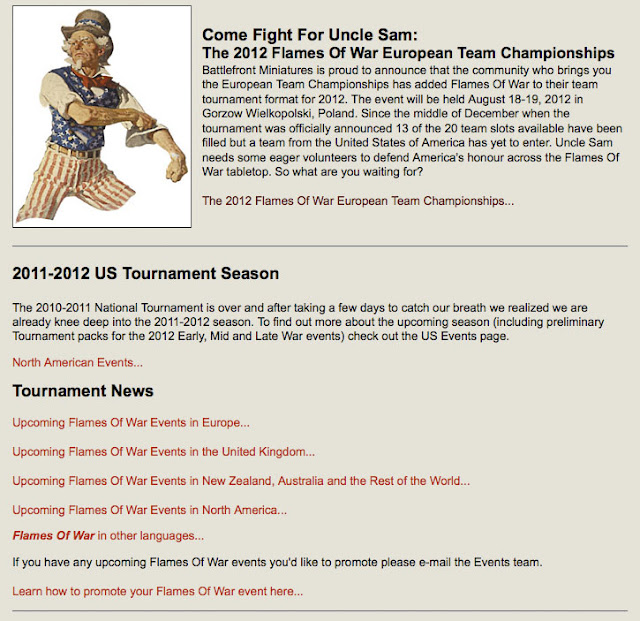 Their tourney system might have issues, but at least they understand the importance of competitive events. Especially in America, which gets it's own section. We do like our competition. :) 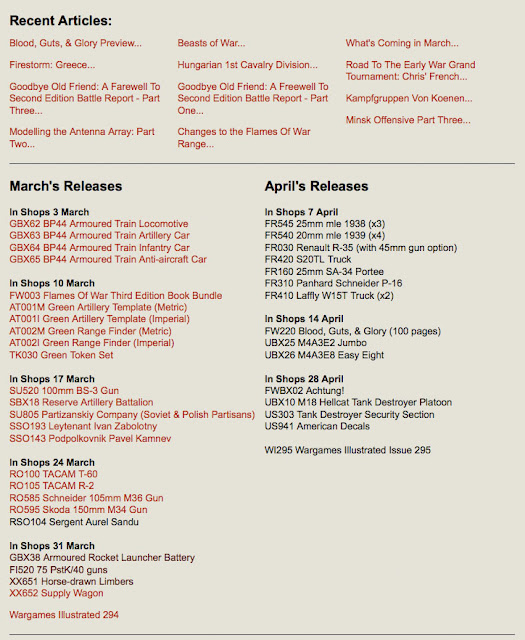 Recent articles... WAIT! Is that a schedule of upcoming releases? NO WAY! You mean they tell me what's coming up to a month out? That's dangerous. I mean, it might build excitement and lead to more sales!

And fellas, this is only THE FRONT PAGE we're looking at here. You can search the site and find all sorts of archived content. All linked to catalog items for easy purchasing. And when you go to the catalog... Hey! You can pull up a list of articles for each item! How... logical.

What you won't find is much in the way of FAQ documents. What they have is mostly for older (pre-2nd Edition) books. You see, they write the rules so well that they don't have to go back and re-explain them later.

The site is also focused just on Flames. There's no corporate/investor info. No info on any other games they might make/sell.

Go to www.warhammer40k.com and all you'll find is a cyber-squatter. If you spell 40,000 out completely (who does this?), you'll just be taken to the main GW page. They couldn't even bother to link it to the 40K catalog section.