My second game of 6th 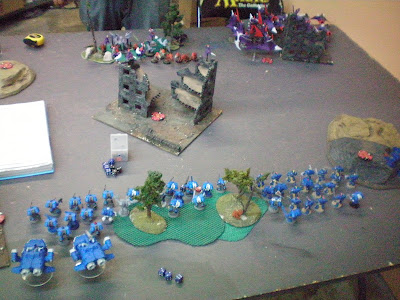 I played my second game of 6th edition, trying out a Jumper list this time. My jumper list was mostly built for 1.5k maybe up to 1750, but I stretched it (using some proxies and wasted points). It was again using Nova format and pitted against DE again. In the past this match up has favored me, but we'll see how it goes...
I win the roll to go first, there is no night fighting Turn 1 and my JP Reclusiarch was my scoring warlord. I jump my lead to squads forward, and shift my second two squads to my right. I know the beasts will hit me first turn, so the most I can do is set up for a counter attack. Speeders and Devs take out one ravager, and immobilize and shake the other.

He moves the beast pack up, going for the right most squad, not the one I expected but not unquestionable. His shooting kills the right devs, and all but the two flamers from the lead squad. The beasts try and assault the squad behind them, but fail the assault range. 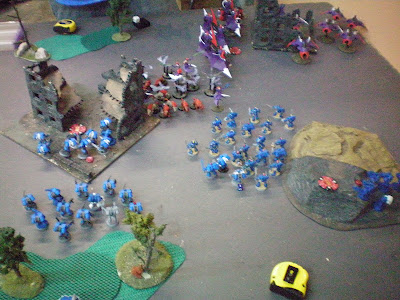 Vanguard come in and assault a raider, since they scattered away from the immobilized ravager. Two full squads and the last two guys from the lead squad move up on the beasts, while the Reclusiarch squad moves behind them to his back corner. 6 flamers later half of the beast squad is dead, along with baron, and they lose assault and flee of the table. 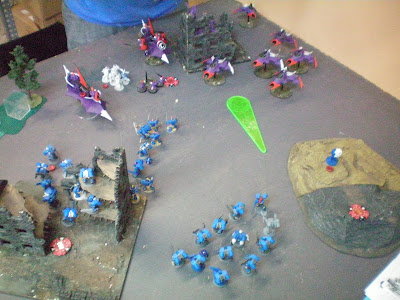 His next turn of shooting takes out the larger squad with the librarian and the vanguard squad. One guy left of the squad and the priest. On my turn the two guys with flamers from the first squad  and the one guy from the other squad huddle on the objective. The priest jumps up and is ready to assault where needed, the last lead squad sets up to assault troops/raider.  devs on the far left shoot down the raider so that squad goes for the troops. They fail their assault through the raider so priest goes into the squad instead of the ravager.

My Honor guard drop in and shoot plasma into one of the venoms and the true born jump out into terrain. the Reclusiarch squad jumps up and assaults a venom blowing it up and most of the squad inside. His razorwing comes in and between the venoms and the missiles wipes out the chaplain's squad. The last large squad moves up and rolls double 1s to assault 3 guys, and so is left in the open to get killed. The remaining plasma guy from the honor guard blows up another venom, while the typhoons take out the next. 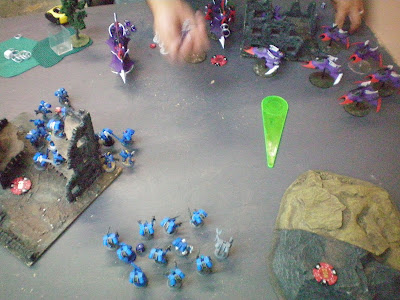 My typhoons go down to blasters, as I take down all of his troop's transports, with only a few guys left. I call it game as he has the mobility to win secondary even if we tie on primary. A much closer game, very bloody and brutal. It also pointed out some more things about 6th for me.

I'm not a huge fan of the new wound allocation rules, the squads that had shenanigans were basically all made characters so they still have it. Close combat is a way too tedious for my tastes, figuring out closest to closest in combat is arbitrary and frustrating at times.

Jump packs going from one terrain to another takes way to many rolls, for each terrain see if they take a wound, then armor save and maybe FNP.
Which leads me to FNP, I don't think I can rely on FNP any more as it is now 5+, I miss the 4+. I don't care if I almost always get 5+, I'd much rather have a 4+ where I can have some say in the situation. Besides, most things that ignore armor are usually S8+

2d6 charge range seems awesome if you have a reroll or roll high, but failing 7" charger after rerolls, or rolling double 1s really suck.

So Jump pack troops are still good, but maybe not as survivable. Meltaguns aren't really needed as much, now that you can easily assault vehicles to death. Maybe it is just because I faced against DE, but I feel infantry just getting taken off the table in a single round of shooting. How is everyone else keeping infantry alive?

Oh and Focus fire vs look out sir, how do they work? I couldn't find anything about it.
posted by TheGraveMind at 2:45 PM