I tried out my tyranids the other day, and lets say it was an interesting game. It was against tau, and a relatively casual list. My Nid list was based off of my 5th ed tourney list, but I was trying a few things, so it wasn't that amazing. Up to this point  in 6th I had been playing NOVA missions (all two games I had played) so we decided to play from the BRB.

Well the dice decided they were going to hate me most of the game. Deployment was hammer and anvil, so oh joy, long ways deployment against Tau, with my Nids. We had 6 objectives with random values on the bottom (scouring?) Basically 2 on each deployment zone, and 2 in the middle. My Warlord trait on my hive tyrant was using his LD within 12"  :/   ya, synapse. 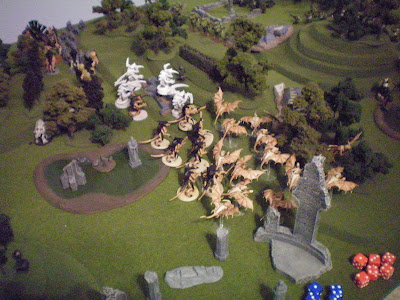 Both hive tyrants also rolled warp speed as one of their powers,... against tau that's what I need, plus Initiative and Attacks. On the bright side I had first turn and there was night fight. That's about the only luck I had. I deploy most of my army at my 24" line, Both Hive Tyrants flying in, and ymgarl doing what they do best, sleeping in terrain.

I move everything up at full speed, Raveners hugging the hill in the center, ready to punish anyone who gets too close next turn. His turn of shooting he fires Air burst cannon from his HQ  along with his body guards into my gargoyles and kill like half of them. Then like 3 or 4 full Fire warrior squads into them, even with cover saves they keep dropping, so I had one left. On the other side plasma and missile pods fire into my tervigon, and I can't make a 3+ armor save rolling three 1s. Tervigon has one wound left, and he fires all three broadsides into it, two miss, and the last one rolls a 1 to wound. 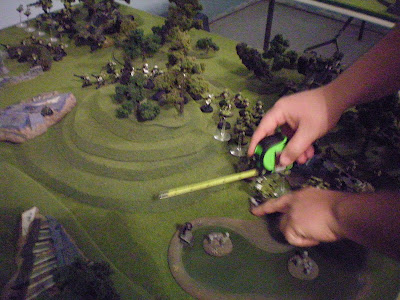 My turn, both Tyrants get a 2 for reserves and ymgarl roll a 1, so no reserves. It is at this point I realized my mistake, I should have had both Tyrants just deploy normal and moved up 12", I may have lost one, but at least they would have had one turn of use, and the other would be ready next round. Instead when they do come in, they will move up 24" and be on my deployment line, 12" behind the rest of my army.

So I keep moving up, lone gargoyle goes down to over watch. Bivores continue raining death upon fire warrior squads (my only useful unit the entire game). Raveners move up to assault a full squad of fire warriors, over watch kills one, I need 8" roll 3, and with fleet reroll and get 7, ugh.

His next turn I basically lose everything, with only 2 warriors on my right side, my zoanthropes and biovores on the left, and 2 raveners in the front. and one gaunt squad hiding on my back objective.

Turn 3, I again roll 2 for ymgarl and tyrant, but the second tyrant comes on, and runs and is still way behind. Warriors move up and pew pew and kill nothing, Zoanthropes kill off a single crisis suits. Biovores scatter off the intended squad, and kill most of another squad, leaving three squads with about 3 or fewer models. The two Raveners move up about 2" away from two of the injured Fire warrior squads ready to multi assault. 1 Ravener> fire warrior squad I figured. His overwatch is HOT, like between hits and wounds, does 2-3 times more than he statistically should and kills both raveners. Bottom of three and I have yet to make an assault, and I'll probably get tabled his turn of shooting so I call it. 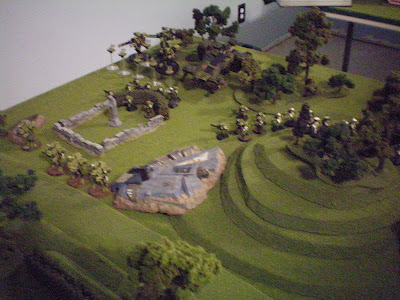 I looked at the objectives at the end, and his were the 4, and 3, while the ones on my side were 1, 2, with a 3 and 2 in the middles. Basically I'm not a fan of book missions, nor deployments, they are random, unbalance and fit the theme of 6th edition. I still had a lot of fun, but man overwatch really hurts Nids. We pay for High initiative models with no armor saves to function as "glass hammers" but now we don't even get a chance to hit once.

Basically I'm still jealous of everyone else getting awesome fast attack options (wraith, beast packs, thunderwolves) that have good saves, multi wounds, move 12, ignore terrain, fleet, some times grenades or invulnerable saves. And yet the army that you would think would have a good amount of beast, has only one, and they aren't good at all. Back to painting table for nids.
posted by TheGraveMind at 8:43 PM