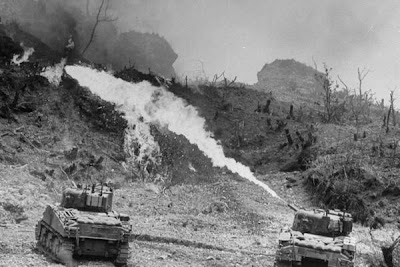 I was wondering something, as I have not had any real practice against the Guard Codex, and a friend of mine is looking to make his a little more beefy.

We both had a question based on what do you think of Hellhounds?  We are stuck hunting for a reason not to use them.  As they seem really really good.  If you could give me some insider advice, as it seems to me that you know your way around the Codex.  I would greatly appriciate it.

He has just been having some horrid luck, and needs to get back onto his feet, and get a good list for play.

There's nothing wrong with Hellhounds, I use them quite a bit. It's only recently that I've begun trying some lists that don't use them. I even have my own custom conversions.

The best use of a Hellhound is as a mid-field blocking unit. Run them up 7+" into a Pass that your opponent has to get his units through. He'll then have to waste time destroying it, which usually takes 2 turns for assault troops; as they'll only hit the Hellhound on a 6. Buying you time to shoot other stuff. Obviously, you don't want to do this in front of enemy melta guns unless you buy smoke launchers and use them.

You can also use them to protect the side of an advancing line of Chimeras from enemy anti-transport fire, as a Hellhound's side armor is AV12. Think of it as the engine on a sideways train. :)

And, of course, you can just fry Orks, Nids, IG, or other troops with 4+ or worse saves. Orks HATE this tank. Nothing works better to dislodge a large blob of IG from an objective either. Even Marines will grudgingly respect it's ability to auto-hit them and wound on 2's. But whatever you do, don't leave it static behind your line. ALWAYS move 7+" with it!

For the hull weapon, use a multi-melta. Not because it's uber, but because it could kill a tank. Which will force more bad decisions from your opponent than you might think. Like a Demolisher, Hellhounds have an immense Psychological aspect to them.

The only real downside to Hellhounds is that they compete for Fast Attack Slots with Vendettas, Valks, and Sentinels. So in a mobile force you're likely to only be able to fit in one, lest you not have enough reliable long-range anti-tank fire.

Some Back40K Battle Reports With Hellhounds:

Dictating where an IG Platoon gets placed:
http://theback40k.blogspot.com/2010/07/battle-report-man-cave-ii.html

As you can see, they're pretty handy.
posted by SandWyrm at 2:09 PM