A Day Shrouded in Darkness; Game 1 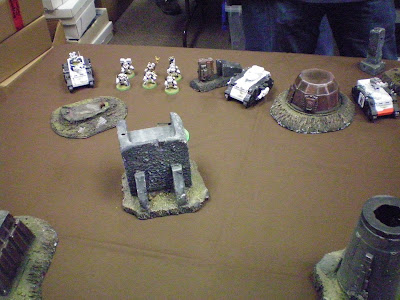 So this Saturday I drove Strung Muppet and myself up to Lafayette to take part in "A Day Shrouded in Darkness" hosted by the Game preserve and Ursa's Den. The missions were good, with just a few minor things needing to be tweaked. All of my games were incredibly close and a lot of fun. There was almost full turn out and each person there was extremely enjoyable. Luckily I brought my camera and took a good amount of pictures.


I guess it is worth mentioning that of the 12 people there, it was broken into two sides, Forces of Order, and Forces of Disorder. My marines fulfilled their destiny and joined the side of Disorder to help keep the sides equal numbers. That way it wasn't as likely for Marines to be fighting Marines, well except everyone was surprised by the turnout. I know there were two tyranid players, and one Eldar player. Everyone else was MEQ. Two forces of chaos, and my Blood angels finished out the Darkside, while Grey knights led the rest of the Space marines for the Emperor!

Mission 1: The Midnight Landing
For my first game I was paired against marines of a familiar color. I have played against The Brotherhood before, but mostly with my Tyranids. This mission was constant night fighting, and the list with the most units capable of deepstriking was the attacker. Well that is obviously my list, so The Brotherhood sets up first, and can move terrain pieces a bit. But then Attacker gets to go first. Which for me didn't matter too much as my army is designed to be able to fully reserve anyways.

I was enjoying the idea of this mission, it is constant night fight, so I can get in his face easy, I'm given first turn, and its built around deepstriking. I kept reading down the mission sheet, and it was a Kill point game. OK, that is do-able,.... wait what? Oh joy, Modified killpoints. Every time you broke a hundred, you added a killpoint. So something 100+ was 2, 200+ was 3 etc. Now that can be dealt with, it is point value kill points. The kicker, any unit arriving via deepstrike was an extra killpoint.
So Reclusiarch = 3kp, each priest = 3kp, each assault squad = 4kp. I totaled 27KP for that mission.

I need to state now, reading back over the mission, I misplayed/cheated. Not only was any unit that was able to deepstrike forced to be in reserves, but they had to deepstrike in as well. I had turbo boosted my Stormraven and typhoons on from the board edge. Now it took them two turns of turbo boosting almost just to get to the fight, so I'm not sure how much of a difference it would have made, but it was an incredibly close game, and came down to one model each. 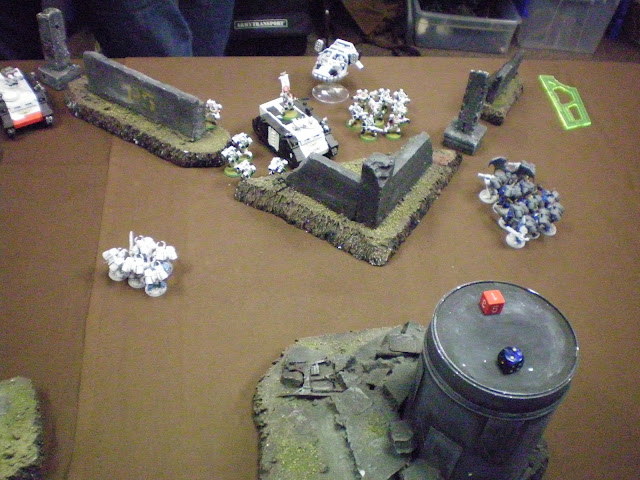 We flew through first turn and went on to second. I had everything but typhoons come in and I started my not-so-controlled descent. He had a plasma gun/cannon tac squad in a rhino on my far left, so I decided to take the right flank, until I could jump over and get it. Deepstriking marines do not like plasma cannons. I placed my flamer squad with Rec in front of the devs with missiles, so I could flame and shoot the crap out of them. That many missiles would be very damaging. But I perfectly scatted 5" straight at them, so mishap back to reserves. So vanguard were to assault them, but scattered 4" directly away from them. sigh... Well I brought my second squad in near the rhino on the far side, and two meltas and an inferno pistol later I blew up the rhino and pinned the squad. 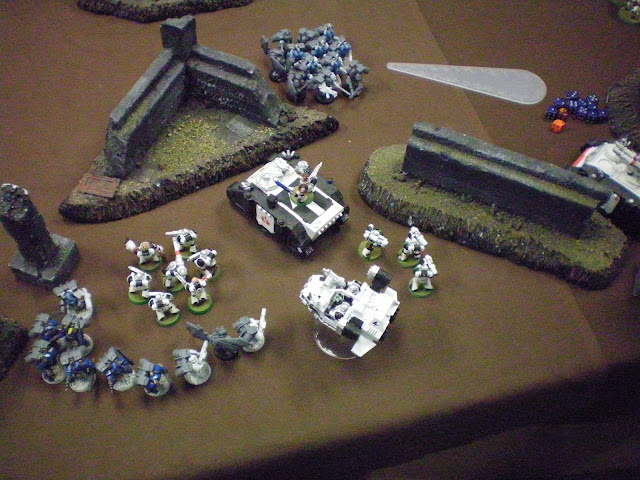 The Vanguard died horribly, but took a good amount of his army to do so. My next turn the first squad came in, and did what it was supposed to, but now his plasma cannon had gotten closer. Well the devs broke and started running. My melta squad jumped around the pinned tactical marines, and fired melta into the second rhino. In this killpoint mission, I got a weapon destroyed, and a Stunned. Well I followed up with an assault, and multi- assualted the tac squad. A couple S5 attacks against the rhino got an immobilized, but I just couldn't get it. I ended up wiping the Tac squad, luckily killing the sergeant on his one armor save. 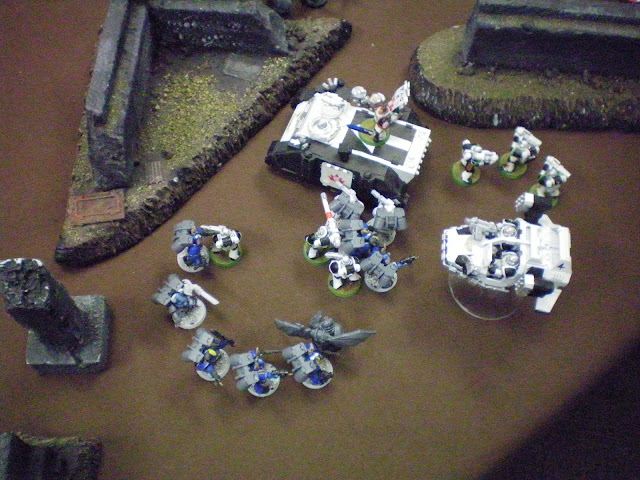 The squad that was in the damaged rhino jumped out on the other side, and opened up into the assault squad that hit the devs. Luckily due to FNP, I only lost one guy, oh that was after losing six to a plasma cannon. I manage to blow up the rhino finally on my turn, my Storm Raven fired blood strikes into his predator, getting a weapon destroyed and immobilized, so I took off the lascannon on my side. His typhoon shot at my Raven to no effect, and was immobilized from my shooting the next turn, because I can't kill a tank in a KP game. 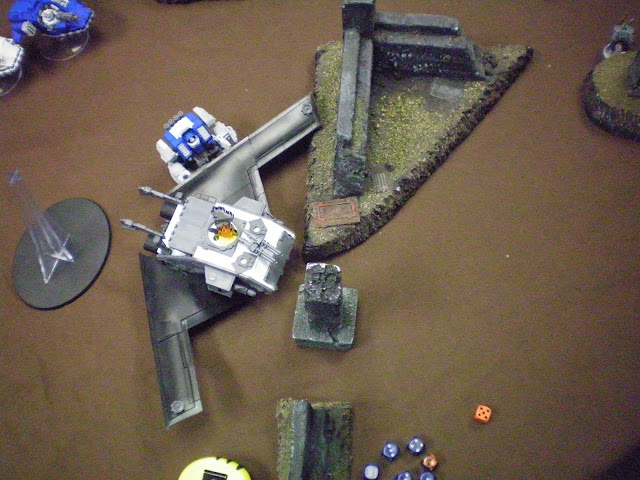 His lascannon razorback shoots down my Storm raven, so my dread jumps out and fires a melta into the typhoon that was sitting in front of it. My Rec squad assaults an wipes the Tac squad that shot at them, and consolidated behind the wall. The other squad huddles near the wall as well. 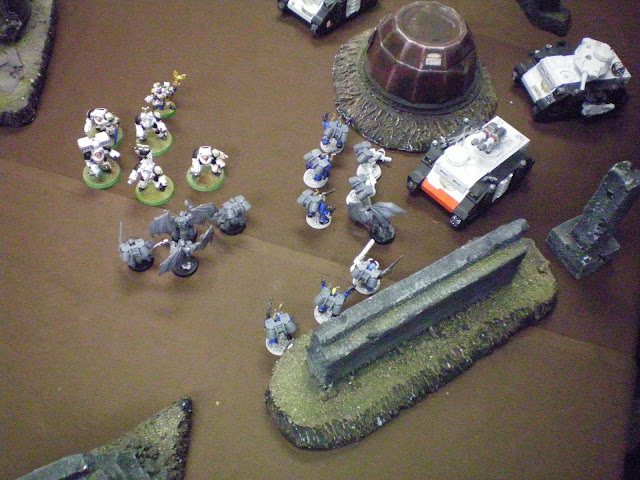 My typhoons finally come in, and just turbo boost on the far side cause its too late for them to do anything. The Rec squad jumps out, and I take it too his terminators and lib that have been approaching from the other side. The melta squad jumps out and fires into the the razorback. Three melta weapons later there is another weapon destroyed and immobilized vehicle. Sigh, fine, assaulting that tank too. I put all of my power weapon attacks from Rec, priest and sergeant into the terminators. My one marine ends up getting one attack through, so he takes one armor save on his last terminator, and stacks the power weapon attacks on the others. Luckily that terminator was the one that was about to power fist my priest, and he failed his 2+. He assaulted in with the plasma squad the next turn, and couldn't reach the priest but killed the two guys I had left. We tallied up, and I had 15 to his 10. If it wasn't for failing that save, The Brotherhood might have won that game. The terminator alive would have saved him three KPs and killing the priest would have gained him 3kp, and would have put him ahead by 1kp. 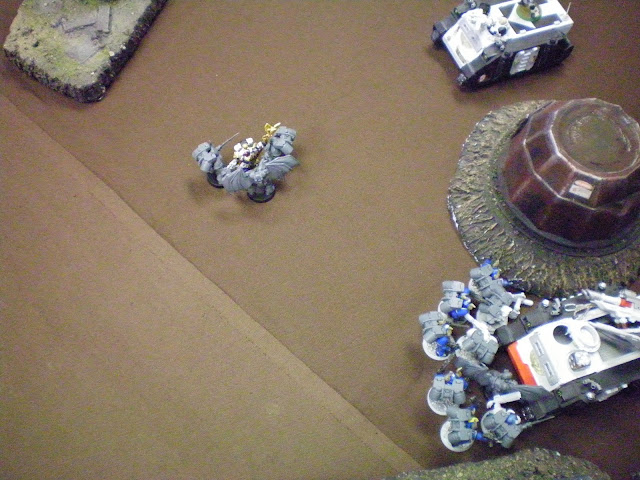 Getting my HQ and main assault squad a turn late due to mishap hurt, Vanguard doing nothing hurt, and having horrible luck killing vehicles was frustrating. But once I hit combat I was able to wreck and taking the flank was a good idea. I won due to a failed 2+ armor save... That is a close game.

So the Plasma Drake's first tournament, along with my Storm Raven, performed well and squeezed out a win. And those darn Typhoons? Well, it seems there were 3 bonus points for having a unit arrive late from reserves. I tried not to make it too long, so that is the overview and game 1. Next time will be Games 2 and 3.
posted by TheGraveMind at 12:56 PM