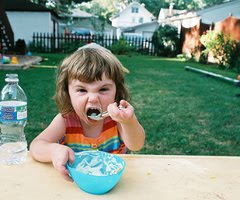 My response to FarmPunk telling me I had ice cream balls.
Needing advice on my army for the newest 1500 pt game.  Farmpunk asked me last night to put it up, at which point i stated: "In front of all the world to see?"

His response was: "Do you have steel balls, or ice cream balls?"

I threw my marshmallow, cotton candy ice cream on the ground and growled to the world, "BRING IT ON, WAAAAAGH!"  at least that is how I remember it. I think the blue mouth and marshmallow cotton candy bowl of ice cream really upped my bad assishness; lol.

edit:  decided to post this for all to see, before the other back40kers post on it, to basically get the rest of the blogospheres responses.  :)   and it might just help out the aspiring ork player as well.

so here is my list, any ideas would be great.

it is not complete, and i have 94 points left to work with.


After all this, I have a grand total of 94 points left to spend on something.  I originally had some rokkit shooting killa kans in it, or another ork nob biker.  its really up in the air at this time.  I have a week to model crap too, cause I'm going for the painting award too.  I have been told to add more lootas.  and at this amount of points left, I could conceivably add 6 more lootas.  The nobs count as troops choice, because of the warboss so i do have room.  so with that.  here we go.
posted by uberdark at 1:17 PM