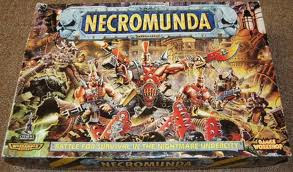 I was a bit surprised when I walked into the GP North and found Lord Ober eager for a Necromunda game. I pulled out a fresh gang I had drawn up previously, and We sat down to some of those basic questions everyone has when they start:

What can I play? What's the difference between groups? Do you HAVE to be human?

The setting for Necromunda is the Human Hive cities, so for the most part, yes, you're going to be human. There are some variations though, like ratskins, there's also a mutant gang (scavvy gang). I don't recommend those for anyone but pretty experienced Necromunda players. They're tough gangs to field, and outlaw gangs need to be allowed in your campaign, as outlaws have different rules. 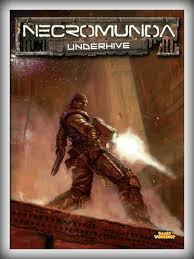 So what do I recommend playing for a first gang?
I say take a look at the basic gangs, and choose one that fits a style and look you think you'll like. 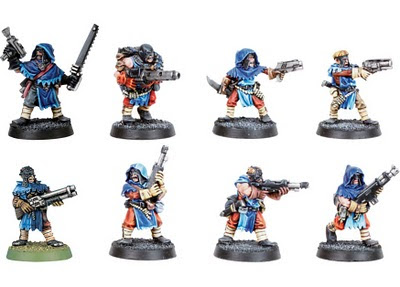 House Cawdor:
These guys are the religious fanatics of the hive. They like to close quarters weapons, and close quarters abilities. Their basic gangers get agility, combat, and ferocity type skills, with the juves only getting combat and ferocity. They're going to play close, and fanatical. 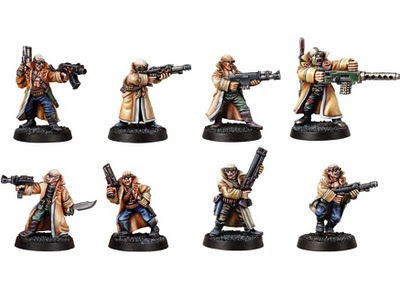 House Delaque:
These are the stealth and shooting guys. They bring an array of weapons to the table, with a preference for shooting. Their basic gangers get agility, shooting, and stealth skills, with juves getting Shooting and stealth. They're going to want to hide and shoot you. 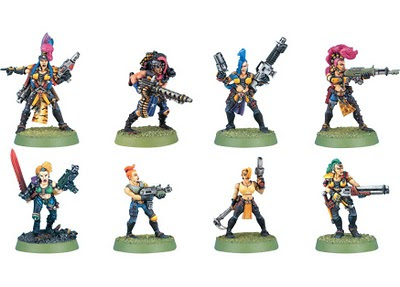 House Escher:
This house has female warriors, and love hand to hand combat. The basic gangers get agility, combat and stealth, with the juves taking agility and combat. If you like wyches or banshees, this is your gang. They're nimble, and stabby. 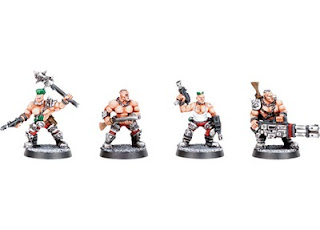 House Goliath:
This is the house of the hulking brute. These guys want to get close and beat you up. Goliath gangers take combat, ferocity, and muscle, with juves starting with ferocity and muscle. They're strong willed, and hard-hitting. 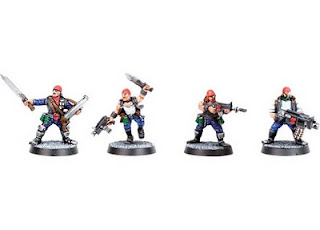 House Orlock:
This house is all-around decent. Orlock is slightly more shooty than a lot of gangs. Their gangers come with combat, ferocity, and shooting, with their juves have ferocity and shooting. This will make them stick with a fight, and shoot pretty well. 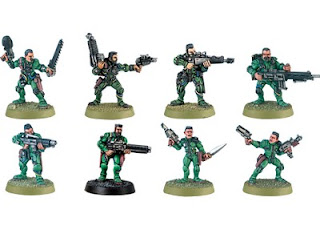 House Van Saar:
The top in shooty gangs. Van Saar is all about shooting, and tech skills. Their gangers get combat, shooting, and tech. The juves get shooting and tech. This is the ONLY gang that the rank and file people get access to the tech skill tree. Is that good? yeah. it's unfair-like good. It's the reason I highly recommend using the Skills V2 tables.

The Skills V2 tables bring balance back to some of the Close combat gangs. Otherwise, it doesn't take long for the Van Saar gangs to all be toting plasma guns, and laughing at you trying to run through plasma death, and using their techno skills to have 2+ ammo checks on their plasma also.

That gives a basic overview to the basic houses. I highly recommend chosing one of them if you're starting out. Van Saar is probably the easiest gang to start with, because of the overlapping combat and shooting skills (they can do anything), but Orlock's a strong contender because of the ferocity and shooting combo.

When you've decided on a gang, you get 1000creds to start your group. You'll have to look at Pg 78-79 for starting weapon choices and prices for each house. I'm going to make mine using house Orlock prices and options.

Since everyone starts with a knife, I can work from there. the leader and heavies I want to have decent guns. Orlocks get no plasma, which is something I typically will take with my Delaque gang, so I'll go with a Heavy Stubber (120c) for one heavy, and a Shotgun with manstopper rounds (25c) for the other heavy. After the first battle, we can buy him a better gun (plasma). Leaving us with 315 creds. For the Leader we could do a Meltagun, or we could wait until after the first battle and get a plasma gun for him.
For our gangers, we've got a few decent choices. Lasguns aren't bad, and Shotguns with manstopper rounds are good as well. I like the manstoppers a lot, as Str4 is great in Necromunda. so we'll bust for 2 shotguns, and 2 lasguns. 25c each, for 100c total.
For the juves, I get pistols for them and that's about it. if they hit, great! if not, oh well. I get Autopistols, since they don't get negatives to hit at long range, like laspistols do. that's 15c each, so 60c total. That gives the juves a knife/pistol combo to charge forward with.
Now back to the leader. A plasma gun is going to run 70c, if I buy it after my first battle. or I can buy a meltagun now for extreme takedown power. Your choices here are going to depend on what direction you want your leader to go in. Do you want him to shoot? or get into CC and beat face? I typically prefer shooting, with some CC backup. I'll go a cheap route, and give him a shotgun with manstoppers, and a club, for extra CC hitting power. That's 35c more.
We've got 120c in the bank.

that reduces me to 80c, which I'll hold onto in case I get any good deals from the merchants after my first fight.

I hope that helps with some getting started, picking a gang, and starting a roster!
posted by Farmpunk at 3:20 PM