Something My Teacher Once Told Me 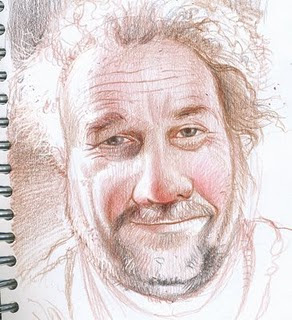 I made a comment in Spaguatyrine's post about redundancy yesterday that he asked me to explain better, as he wasn't quite sure how to take it. What I said was:


"You have to learn the rules before you can break them."

I first heard this from one of my best teachers in art school, Walter King, back in '93 during his illustration class. That's him up top in an excellent drawing from Dave Groff's blog. He's a little grayer now, but I'm sure he's still a great teacher.

So what does it mean to say that you have to learn the rules before you can break them?

Well, when you set out to learn about art, golf, miniature wargaming, computer programming, or pretty much anything, you have to start somewhere. Usually this will include learning the rules as they are understood by the majority of the practitioners of that discipline.

In 40K, this means learning to follow the "rules" of redundancy, efficiency, etc. As originally laid down by Stelek and reinterpreted through the writings of Me, Kirby, TKE, and countless other good players.

So you wade into 40K and learn that certain units suck, others are awesome, and whatnot. You start winning more games than you lose, and that enforces your belief in "The Rules". But as you learn the rules, something else starts to happen. You internalize them and break them down into their own most basic principles. That then gets filtered through your experience and you find that one day, you've made your own rules that work for you, but that differ from the predominant group-think.

That's where Spag is coming from.

Here's some examples I gave in the comments to Kirby's recent post on optimization:


"That's my biggest beef with Stelek-style lists. The inherent weakness of spamming the same unit over and over. Taking nothing but say MeltaVets or Autocannons creates tactical weaknesses that a canny opponent can exploit. While taking a more diverse selection of units that fill the same role (but less "optimally") gives you additional capabilities and fewer weaknesses overall.

Too many "optimal" MeltaVets and you'll have a traffic jam trying to move forward, while the guys in the backfield won't have anything to do at all. Taking only autocannons to pop armor optimally doesn't work so well against a force of Monsterous Creatures with 3+ saves and 6 or more wounds. So adding in some Lascannons or even Missile Launchers will address that weakness.

These are all tactical considerations that come out of testing and practice, which there is no substitute for. You can optimize for a given criteria all day long. But until you test your assumptions, you won't know if the criteria you selected was worthwhile or not."


"There are some units that are so reliable that they don't need backups. Like Hellhounds for fast blocking and interference. So taking 2 doesn't give you any real advantage over having one.

In the case of a Leman Russ Demolisher, you need one for putting insta-killing wounds on T5 or 2+ save units. But while you don't really need a 2nd, you do need another Marine-killing large blast somewhere. So by taking a Vanilla Russ as backup you have that redundancy for killing power armored guys, but you also have the ability to throw that AP3 blast 72" if you need to. They also occupy different parts of the board during a game. So you have overlap, but also unique abilities that address your weaknesses and allow you to exploit opportunities that may arise."

I've played Spag's Space Wolves enough to know that they've got plenty of redundancy. His 1500 point GK army isn't as redundant, but taking duplicates of something like a StormRaven just isn't something that you can do in that small a game with Grey Knights. In our 2K game last night, he did bring along a second Raven. Though he could have brought a Land Raider along to fill that same role in a different way.

And Now For The Catch...
Here's a painting by Picasso: 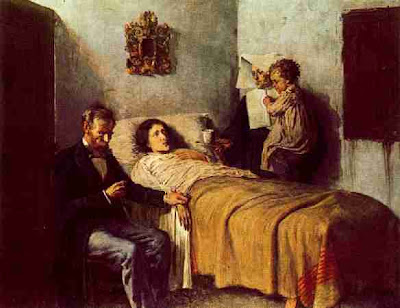 Not what you expected? How about this: 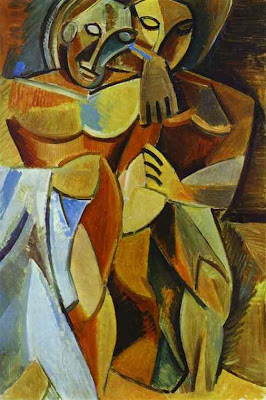 The same man painted both of these images. He's more well known for the 2nd painting, but he paid his dues and learned to paint realistically as a young man before he moved into cubism. The cubist style came about as Picasso internalized the rules of realistic art and reinterpreted them for himself. 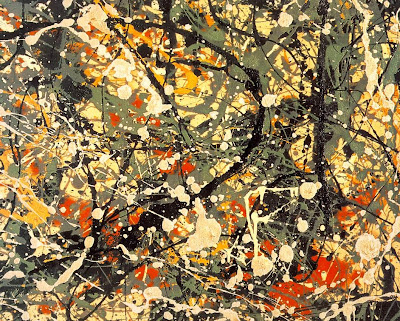 Problem is, generations of artists have looked at Picasso's later cubist work and assumed that they don't have to learn the rules. Realism, to them, is obviously for chumps. They try and skip that step and jump straight into abstract work, like the Pollack image above. It's an easier path, as it's harder to criticize an abstract piece meaningfully. But how many abstract artists come anywhere close to Picasso's success? Very few.

Here's the thing. Picasso thought JUST AS MUCH about every brush stroke in his cubist paintings as he did in his earlier realistic ones. His cubist work looks random, but it really isn't. He's still used most of the things he learned as a realistic painter to make cubist images. Color, composition, feeling... it's all there. The only thing that's changed is the realistic details. Replaced by his own interpretation of the rules that enabled him to do what others couldn't.

It's the same with 40K army lists. Some winning lists look like random battleforce mashups, but really aren't. You just don't see the careful thinking that went into them. This can be misleading, as it seems to say to less experienced players that you can just take any old thing and win. So players who don't want to learn the rules just throw in the stuff they have an emotional attachment to. It's fun to be different, but if you aren't thinking carefully about your choices then you aren't going to see the same success in taking a diverse list as Spag or JWolf do.

You really do have to learn the rules before you can break them. Being different for the sake of being different - instead of for specific benefits - doesn't work.

In my own case, the best approach seems to be duplicated units where I need them, mostly in the troops slot. With a bias towards diversifying my choices where I can. Of the 8 non-troops choices in my 2K Guard list, only the Vendettas get duplicated, as they're just too good at what they do.
posted by SandWyrm at 12:25 PM