What Do I Consider Cheating In 40K? 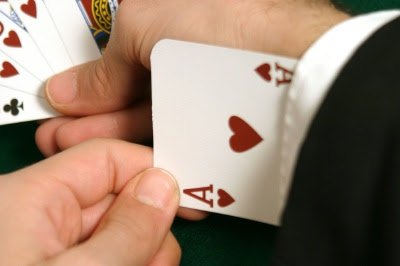 I was asked in a comment to my 'Ard Boyz article to describe just what I consider to be cheating in 40K.


"Sandwyrm what is it that you consider cheating here bub. I mean I have a rep of being a good tough player. I make my game plan and evolve it to who I'm playing at the time. I played you down at your Game Preserve when you had the Tallaran. (not sure if you still have them.)"

I consider cheating to be anything done outside of the rules to gain an unfair advantage. Oh, and the Tallarns got sold off late last fall.


"Some folks I have played in the past were obviously cheating. From arguing with me over fluff passages saying this and that happen in the game to loaded dice. But is being an agressive player grounds for cheating?"

There's nothing wrong with being aggressive as long as you're not also unpleasant. There are a few guys here in town who fall into this category, but I wouldn't call them cheaters. I'm also more tolerant of such behavior than most guys are.


"As I am sure that in the past I have had people think man that is just too good...he must be cheating somehow."

It happens. When the other guy's dice can't seem to roll a one, the thought goes through my mind. But that's a different thing from seeing an obvious cheater at work.


"So I'm going back to my original question. What is it that you call cheating. Arguing for a cover save? Constantly badgering your opponents over their movement amounts when they are moving less than a fraction of the space they are allowed. Large Dice, casino or otherwise? I hate to be the bearer of bad news here, but at least 50% of players and most of your writers are guilty of most of these things."

Ok, here's a list of the blatant cheating I've seen at 'Ard Boyz:

Any time someone pulls out a horde army, you can expect the game to go short, but if you can't seem to get through turns 2 or 3, then something is definitely up. I once had an Ork player on table 3 take 45 minutes to set up for the final game. Then, whenever he moved his models, he did some one at a time. He had two hands free, but he would only use one to move models. Each model was also VERY carefully placed such that it took 3 full seconds per infantry model to move them around. Later, he decided to go get a drink from the front register... for 10 minutes.

It's not usually so blatant, but when you're gaming a degree-of-win system for points, the delay can mean the difference between a solid victory or a massacre. Which matters when you're trying to stay on top of the heap. If you're winning or losing in a NOVA event, the degree of win only matters to your matchups, which is hard to predictably game.

Because the larger the die, the more easily you can game the roll to get what you need by dropping them instead of rolling them. If you're going to use casino dice, then use ONLY casino dice... and ROLL them. There's a reason that craps rolls in casinos are only valid if the dice are rolled and bounce twice before coming to rest.

I had to break myself from the habit of always rolling certain colors for certain tests. The results weren't any different, but it didn't look right to the other player. So I deliberately mix it up in my games. Why not just use the same color? Because multiple colors make it easier to roll multiple tests at once, speeding up the game.

The worst are when players bring weird glyph dice that only they can read. Or what look like hand-casted resin dice that may very well be weighted.

I've had even a nationally known player do this to me once. He measured his move, then he moved his model quickly in a sudden 'burst', while moving the tape measure away at the same time. And what do you know? He moved about an inch too far forward.

The nicer, more agreeable, version of this is to start asking your opponent about their conversions or painting during their movement or shooting phases, in order to distract them. At least then you can choose whether or not to answer. You can also stop it with "Sorry, I'm concentrating on this" if you want to.

The douche version is to start nitpicking every little move your opponent makes. The real douches will start insulting you too. Such as: "Once you start playing real competitive games, nobody is going to let you get away with (insert nitpick), but I'm nice so I'll let you do that."

The only response in this case is to be insulting back. By which time neither one of you is having fun anymore.

Doing this by accident in a casual game is one thing. But in a tourney I expect you to pull out your list and add everything up properly.


That's my list. I have seen some of this locally, especially the movement cheat. If it's a casual game I'll usually let it slide for the sake of friendliness. If it's a tourney game I'll call people on it early. That's usually enough to stop it.