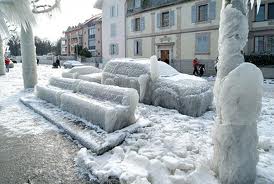 I went out to go to work and had to chip off 1.25" of ice off of my car this morning.  At my restaurant, I called off most of my employees, and closed 6 hours early.  That being said, I have a nice story to share about today.

A family was traveling to the east side of Indianapolis from the far west side, Avon, In, to meet a family member they had never seen.  Their van broke down right off the interstate and they rolled into the parking lot of my restaurant. We helped push them into the parking lot so they wouldn't stop traffic. They were a family of 5 and their van's transmission had obviously decided it was not working anymore.  The family came inside of my restaurant and called to get some help. After about 3 hours someone showed up in a truck to tow their van home, but could only take 2 of the 5 in the truck.  The mother and 2 kids decided to stay in the store and wait for the truck to come back and get them.  The problem was the the truck wouldn't be back for another 3 hours.  After speaking to them and offering them some complimentary food, I found out they lived about 10 minutes from me in a trailer park in Avon, In.  I thought about it and decided to offer to take them home.  On the ride, I learned that Nathan, the 16 year old son had turrets, and other social issues, and that they had a pretty difficult life compared to me.  I heard Nathan trying to sing to the radio I had on low as we were talking.  I asked if he liked to sing and his mother stated he tried but wasn't very good.  Seeing Nathan's reaction in the rear view mirror, I decided to ask Nathan if he wanted to sing a song with me? I turned up the radio and we proceeded to sing loud one of my favorite songs, "I can only Imagine" by Mercy Me.  The happiness on his face and his mother crying in the front seat was priceless and warmed my heart that I had offered to drive home this family in the middle of a blizzard when most people were warm and cozy in their homes.  I dropped them off and wished them the best and God's blessings on their difficult situation. As I drove home I just couldn't help but being thankful for my newer car, nice house, good job, and all the little plastic and metal figures I play with.

I don't write this to point to what I have done and look for praise, but when a city the size of Indianapolis which is used to snow storms is shut down by an ice blizzard, do we look at what really is important in life and make a difference in our community?

Do you have any stories to share of someone who has helped you or made a difference?


P.S. Since I am a space wolf I kind of like the ice. (Not Really)  And look forward to seeing a lot of you at the tournament on Saturday!  Bring it!
posted by Spaguatyrine at 7:19 PM