It looks like we can blame GW cost-cutting and the departure of some long time North American executives for the move, which I think is positive for the hobby in every way. Having gone to the semi-finals twice, I can attest that it epitomized the type of event that hurts the image of competitive play in the eyes of the general 40K player base. It was the only tournament I've ever been to where I've been routinely cheated and bullied. Both by the players, and in one case, the store we played in.

Because 'Ard Boyz combined a flawed scoring system, that rewarded players for degree-of win, with huge semi-final prizes (free armies) that encouraged players to gimmick, cheat, and bully their way to victory.

Let's break it down for those who haven't heard me talk about this before...

In a traditional GT format, as conceived by GW in the early 90's, the scoring is not strictly based on who wins and who loses. It's based on degree-of-win. This means that a player who tables his opponent with a massacre will score more points than a player who wins after a close fight with an equally skilled opponent. Why is this bad?


1) Because Your Matchups Will Matter More Than Your Skill. 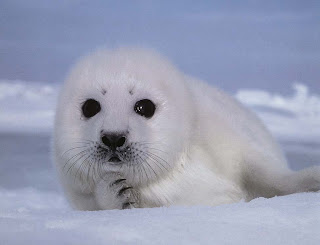 If I go to a Battle Point tournament, the best thing that can happen for me is to draw a 'Baby Seal'. That is, a new or unskilled opponent than I can blow off of the table without much effort. Because I'll get more points for the match and shoot up to the top of the rankings. If I draw 2 or more baby seals in a 3-round tournament, then I'll be almost guaranteed to win the entire tournament. Whereas, if I get matched up against an equally skilled player, I might still win but only get a couple of points for the game. Pushing me down into the middle of the rankings.

I've personally gone to 3-round BP tournaments where I drew 2 seals in the first 2 games and had effectively won the tournament before the final round. Nothing short of a complete loss by massacre would have knocked me into 2nd place! I've also gone to tournaments where I lost 2 of the 3 games but still got 2nd place because I drew a Baby Seal in round 2 and got maximum points for that game. Putting me ahead of players who had won more games.

The effect of this is to encourage players to bring gimmicky lists that can catch a baby seal off-guard and blow them off of the table as quickly as possible. Because winning big in a few games is more important than losing by a little in others.

Whereas, if scoring is based on strict win/loss, players are rewarded for bringing more reliable lists that can win every time, even if only by a little. Because the gimmicky lists rely on luck; and luck isn't reliable over 5-8 games.

2) It Also Encourages Cheating When Adding Up Scores 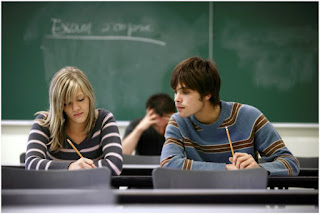 
3) It Encourages Bad Behavior During The Game 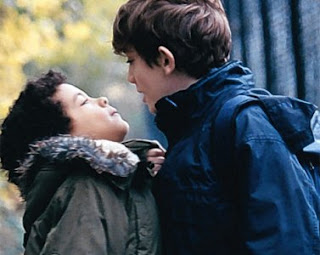 Slow Play, Bullying... These problems aren't nearly as prevalent when degree-of-win doesn't matter. Both times I've played at the 'Ard Boyz semi-finals there have been multiple people getting into yelling matches over small things like movement. Both times (in different cities) I saw players asked to leave the store after physical threats were made. Both times I saw the venue empty out half-way through the tourney as players decided they couldn't win and went home.

Both of those 'Ard Boyz semi-final events only had around 30 players!

Whereas I've been to much larger 256-player win/loss events like Adepticon and the NOVA Open where we had only a couple of minor problems. In an 800% larger event!

At our own 64-player (NOVA format) Indy Open GT earlier this month, I was amazed at how civil everyone was. We did have some tempers flare here and there, but there was no yelling. No physical threats. We also held on to the majority of players though all 6 rounds! Because we had prizes for the winners of each bracket, plus a Best Overall (Renman) prize, and not just one payout for Best General.

And that's the biggest difference. 'Ard Boyz always gave a free army to the winner of a Semi-Final round, but nothing to any of the other players. So the bad effects of the flawed Battle Point system  was multiplied ten-fold. It brought every greedy cheater out of the woodwork and rewarded them for their douche-baggery.

Whereas our top tables at the Indy Open were remarkably civil. Oh, and even our Best General (Hans Krueger) had a beautifully painted army that any hobbiest would drool over. 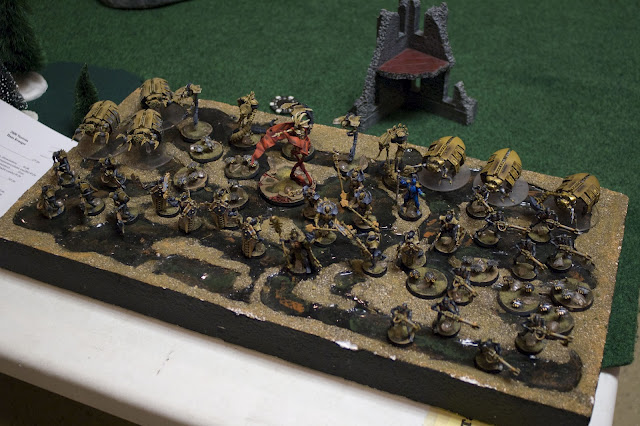 Which is a far cry from the unpainted pile of metal and plastic crap that usually wins at an 'Ard Boyz event.

Good riddance I say!
posted by SandWyrm at 1:05 PM