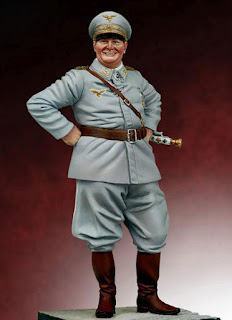 Stelek's been making 2000-point Late War American 3rd Infantry Division lists from the 'Dogs And Devils' book lately. So it's only fair that I see what I can come up with to defeat his 'undefeatable' defensive infantry formations. To do that, I'm going to need a German tank list to work from. 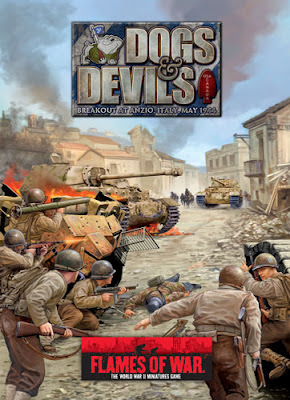 Only one is a tank list, so the Hermann Göring Panzerkompanie it is.


Historically, I consider Göring to have been a thief, a buffoon, and an albatross around the neck of the Wehrmacht. But his Luftwaffe ground troops proved themselves well enough in battle to be respected. So while I don't find the idea playing his personal army exactly inspiring... Well, at least they're not the SS.

First up is the mandatory HQ and 2 Combat Platoons. The optimal HQ choices sort of depend on what's in the platoons, so we'll explore the options there first.

Obviously, I'll need some (relatively) cheap Panzer IV's with long 75mm guns to do the bulk of the long-range tank killing. So we'll take a 4-tank platoon of them. In Flames, 4 is a magic number for tank units because you take morale checks for a platoon when it's reduced to under half. So whether you take a 4-tank platoon or a 5-tank platoon, both will test after 3 tanks are destroyed. So why waste the extra points?

These tanks have an extra point of frontal armor over the PzIV F2's that I usually take in mid-war. They also come with Schürzen side skirts, which give you a 4+ invul save (in 40K terms) against bazookas and similar weapons when you're assaulting.

Now, I could take 2 units of H's right off the bat, but I have other needs to fill first. Namely, I need some tanks that can bombard infantry and shoot direct-fire smoke to prepare an enemy unit for assault. In mid-war, I do that with Panzer IV F1's. But those aren't available to me in this list. Hmnnn...

Checking the German Arsenal on page 78, I see something interesting though. It seems that Hermann Göring's Panzer III N's can fire bombardments and shoot smoke! That's interesting, as the same tanks in the North Africa book can't do this. What's your secret Hermann?

Of course, these also come with decent frontal armor and Shürzen. One M can carry a bail of concertina wire for deployment mid-game, but I'll come back to that option later if need be.

With these two platoons as my base, the HQ choices seem easy enough. One PzIV H and one PzIII N to go along with the 2 platoons. The extra N will come in handy in delivering the smoke.

Now that the required units have been added, I'll get to the other basics that I need. Namely, some artillery for pinning enemy infantry and delivering area smoke.

I could take 6 launchers so that I could lay down double-wide templates, but that goes down to just one template if a single launcher is killed. So I don't see the point. I will be taking return fire, and 4 launchers lets me lose 2 before I start having to re-roll my hits.

Germans don't get great air support options in late-war like they do in mid-war. But limited still gives me 5 dice to try and stop enemy aircraft from entering the table and to shoot down those pesky AOP planes. I might even get to drop a bomb or two on the table. Which forces tanks to hug cover as they move. :)

Next I need a Recon platoon to scout out ambushes and make GtG infantry easier to hit. I can't take PzII's in late war to do this (darn it!). My choices are limited to motorcycles and 2 different types of armored car. I'll go with the motorcycles for now.

That covers all of the basics. Let's see where we are...

680 points left. Let's see what we can do to beef this list up. The most obvious thing I need is some way to dig infantry out of their defensive positions. 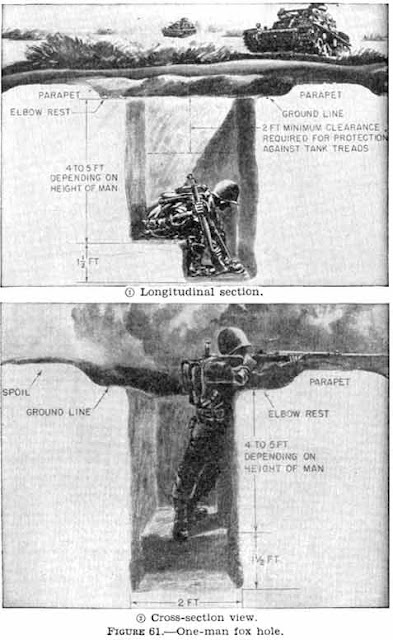 I don't have access to a bunch of cheap light tanks in this list, and the Puma armored cars are top armor 0, meaning that they can be pinned by 5 hits in defensive fire. So mass assaults with tanks will be problematic. Even Tigers fear bazookas and Pioneer platoons in assault. But shooting infantry out of their foxholes is a pain. Since they're 2 points harder to hit, get a 3+ save, and even if they fail their save, you have to make a firepower roll to actually kill them.

There appear to be 3 solutions in the HG Panzerkompanie list:

Infantry are an obvious solution. They're also useful in defensive missions when you want to limit enemy tank movement. The best choice here is probably an 'HG Motorized Auflärungs Platoon'.

Hmmnnn... pricey; and it's not going to get the job done by itself. 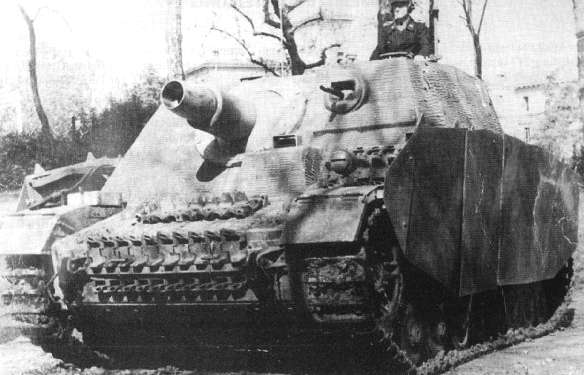 Brummbärs have bunker-buster weapons. Meaning that if I direct-fire at infantry they won't get a save. Yay!

With decent armor and Shürzen, these guys are made for the job. The downsides? Their movement is only 8"/turn, their range is only 16", they suck at crossing obstacles, and they only have one shot. If they move they'll have an additional to-hit penalty, and won't be able to shoot at any tank that's not already bailed out. 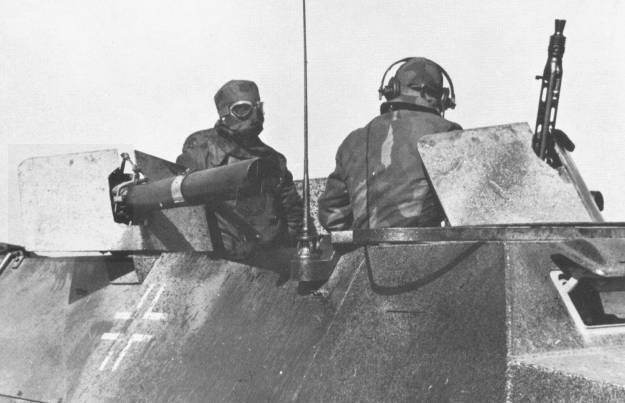 These guys hit the target on a skill check to simply remove the enemy infantry stand. They're also 2 shots each. Nice!

Downsides? Their range is only 4". To fire, they have to move 6" or less. So they'll have to weather at least one round of counter-fire from heavy machine guns and rifle teams. They're open-topped (pinnable by 5 hits), and opponents get to re-roll their firepower tests against them (because of the fuel tanks). They're one-shot weapons, though I don't have to immediately remove the vehicle after firing. Worst of all, they can't assault.

So while they're scary, I have to get them on target, which I hope is densely packed enough to maximize damage. But after one turn of killing they're either gone or hanging about wondering what to do. To me, that makes them sexy but unreliable. Brummbärs it is!

So with the Brummbärs as the tip of my anti-infantry spear, I'm going to need to protect them from enemy aircraft and infantry assaults. So we'll add some Flakpanzers to the list to follow the Brumms around with.

Next we'll need some more anti-tank assets to round out the list.  I could just add some more PzIV H's, but what if the enemy brings something big and nasty to the party? 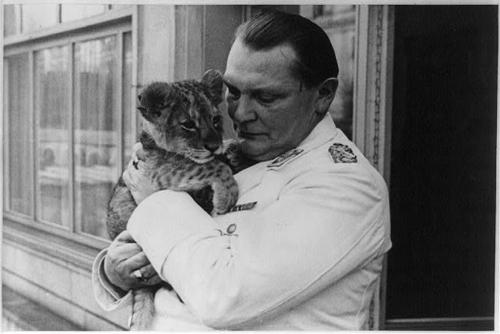 A couple of Tigers ought to be able to handle pretty much any odd thing that an enemy can throw at me. We're over points now, so let's drop the air support. It's value is a bit marginal with the Flakpanzers around anyway. That still leaves us 25 points over, so we'll drop the 1iC down to a Panzer III N.


I'm there, but... I do feel like I need another anti-tank unit. One Tiger is probably good to have as a Joker in my deck, but 2 is likely overdoing it a bit. So let's drop a Tiger and add in another Panzer IV H platoon. To pay for it,  I'll trim the first H platoon down to 3 tanks instead of 4. These guys are going to be the last ones to assault enemy infantry, if ever. So I can trade some quality in order to get a second unit that can move around and snipe.

I'd also really like to have that Air Support in addition to my Flakpanzers. They can hit targets that my Arty will never be able to observe, and let me hunt down those annoying AOP planes wherever they are.  They'll also force enemy tanks to hug cover as they move. :)

To pay for the Stukas, I'll cut down the Recon Motorcycle platoon, the Flakpanzers, and the Rocket Launchers.


And there you have it.

The Tiger and the PzIV H's will kill enemy tanks/vehicles at range.

The Brummbärs and mixed PzIII/IV platoon will move in to assault with the 1iC and the 2iC attached. It's up to the Rocket Launchers and the Stuka to pin the enemy. While the 4 PzIII L's smoke them. The Flakpanzers will follow the advance to ward off enemy airstrikes and help shoot up infantry. The recon motorcycles's job is to zoom up and remove GtG from enemy infantry and/or deter annoying ambushes.