Oh The Stories We Could Tell. 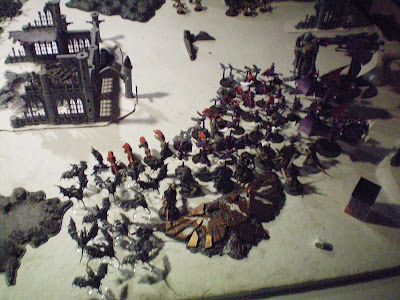 I never really gotten burned out from playing 40k. I know a lot of people after a Saturday tournament don't want to play a pick up game on sunday. I've never had that feeling of, "I've had enough/too much". After the Indy GT is the closest I've gotten. I was working on projects and exams up until 2pm friday. I then went home and started painting my army for 12 hours straight. I actually ended up getting sick after the first day and not going to the second day. (might have something to do with getting a total of like 12 hours of sleep for the entire week leading up to it). Since then I've been working on a couple little painting projects here and there, and playing some more casual games. And that is where this story begins....


I had lost all will to paint any more space marines or their tanks for a while, so I decided it would be a good time to go back and finish some of my Tyranids. I found out about a doubles tournament and decided to team up with my Nemesis's DE for it. I figured some equally fast Tyranids with the agile DE and a few sturdy nids in the back would make a great team. While what we took wasn't the most competitive list, it was still mean and a lot of fun to play. Seeing our opponents' faces when I line up 15 gargoyles, next to 15 hellions, and a 20 man beast pack. Then followed by infiltrating 30 gene stealers 18 inches away. 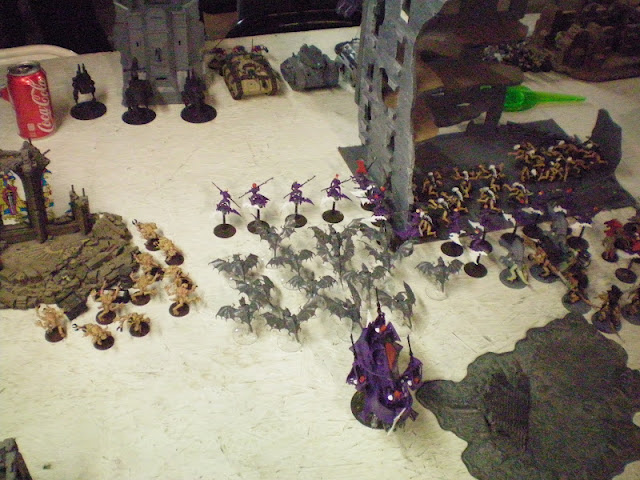 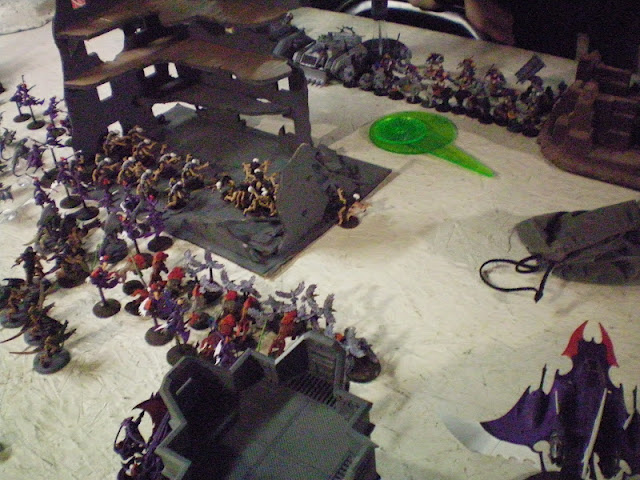 The first game was a minor loss as KPs were 1-3 for the game, but we only got to the bottom of turn 2, and were were set up for our next wave of assaults and were about to get 4KPs on our turn. Second game pitted us against Tau/Necrons, with 5 objectives and spear head. Putting stealers into the non-deployment corners and pushing into their space first turn, the game was over before it started. Game three was IG and space wolves. They took down the DE lances early, and we had no way to stop their Land raider. My stealers also decided to lose combat with gaurdsmen. Over all we had a lot of fun in Muncie, though we faced more tanks and terminators than we had originally anticipated. 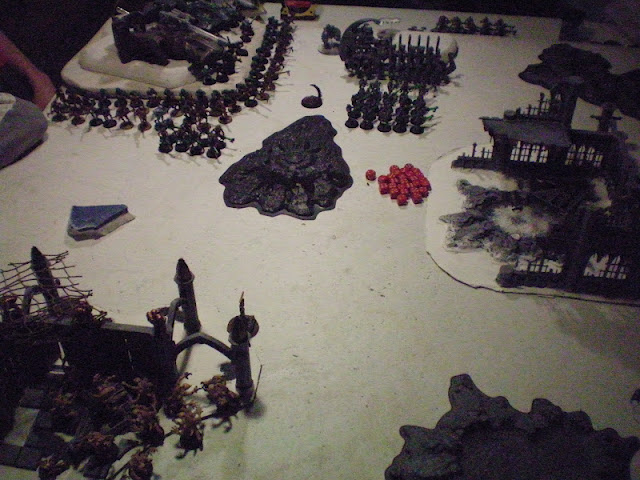 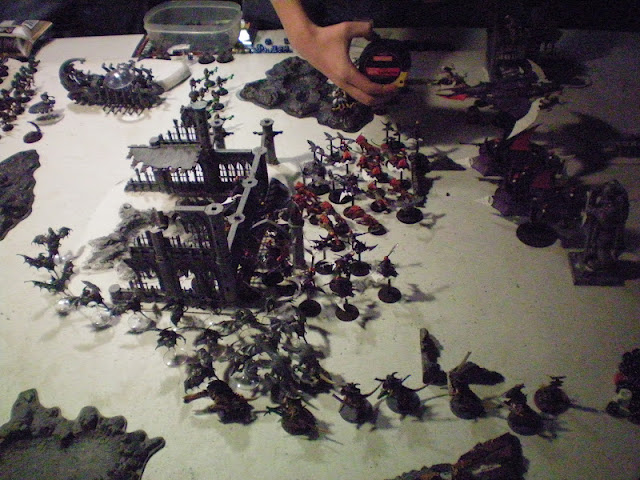 After that, a week or so later I attended an Apocalypse game. This would be my second venture into such a large scale game. I had had fun at my first apoc game, and was eager to try it again. Now I'm not one going to go out and buy big toys or new stuff just to play in Apoc, but it is fun to sometimes be able to throw all your models out at once and wreck havoc.

I didn't use any special formations, and to be honest, I didn't even use all of my marines. I don't know when I got so much astardes stuff, but I found out I have well over 5k worth of stuff. (more around 9k I think)
I kept it somewhat fluffy with a full deep striking force, with the exception of two vindicators. I took the ability to make my entire army have droppod assault rule essentially, so Turn 1 I brought half of my stuff in. Storm ravens and droppods fell from the sky raining death and destruction upon.... Well nothing. We were playing 20k imperial vs 20k orks. and Those pesky orks seemed to have held almost everything in reserve except for a few mortar cannons. 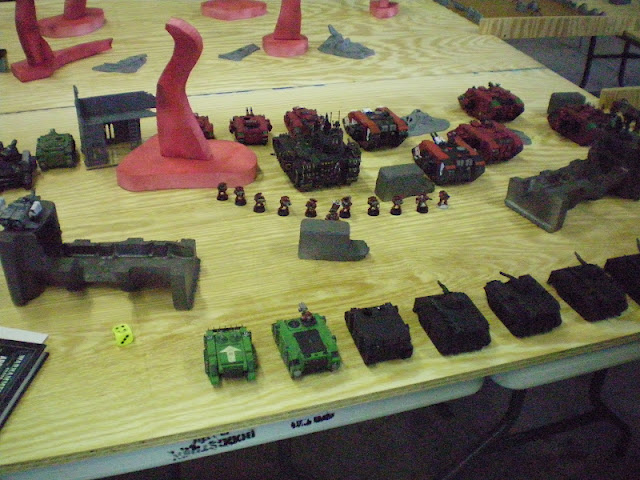 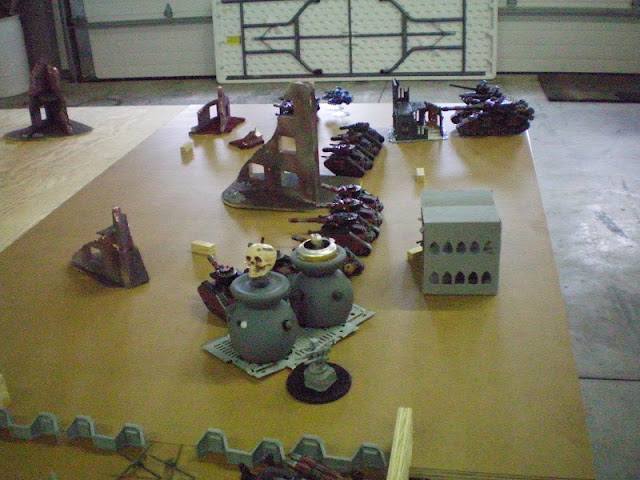 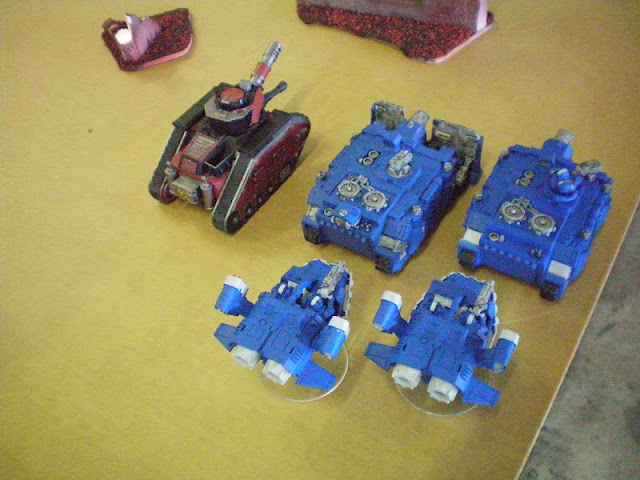 With all of my first wave containing locator beacons, I spread them out a bit and prepared for the next wave. When Stompas and other super heavies started showing up, I was ready. My next wave came in with pinpoint precision and quad meltaguned titans in the feet. Twice I had dealt 3 of the 4 structure point damage needed only to have a vendetta steal my titan kill with a lascannon. 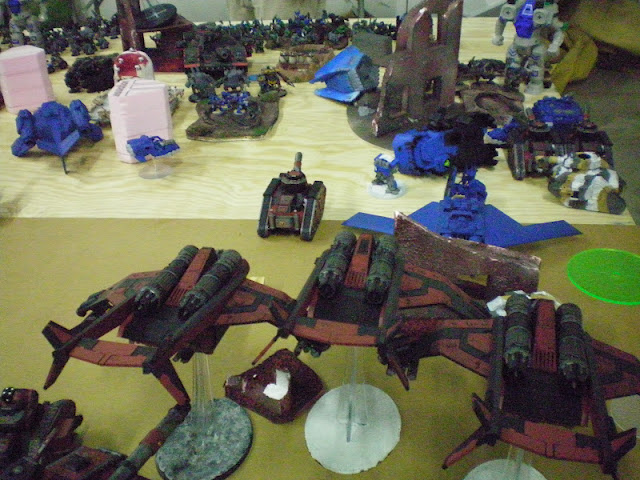 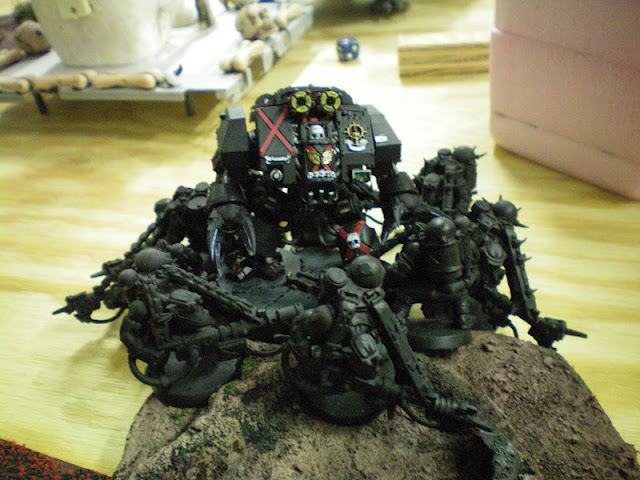 The fun really started when Vulkan with S10 from a holy relic, went into close combat with a titan, and chain reaction blew it up, netting more friendly kills than the titan had. He then proceeded to take on 4 Ork dreads in combat for a few turns before finally being overwhelmed. As I had Deepstriking land raiders with death company coming in right in the front of the battle ready to cause trouble. They killed a squad of bikers, and being left in the open was targeted by a D blast. 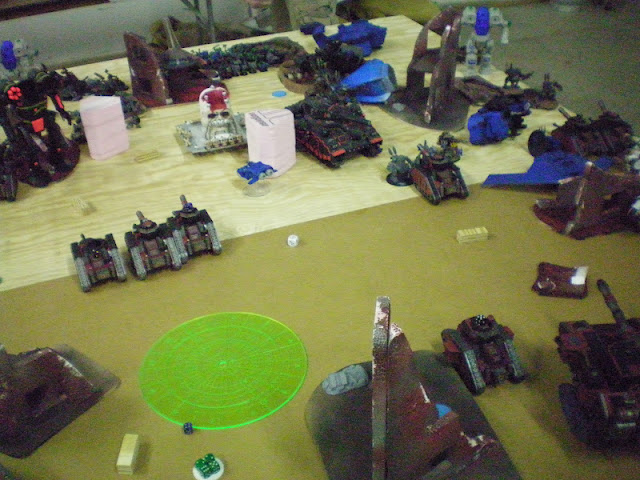 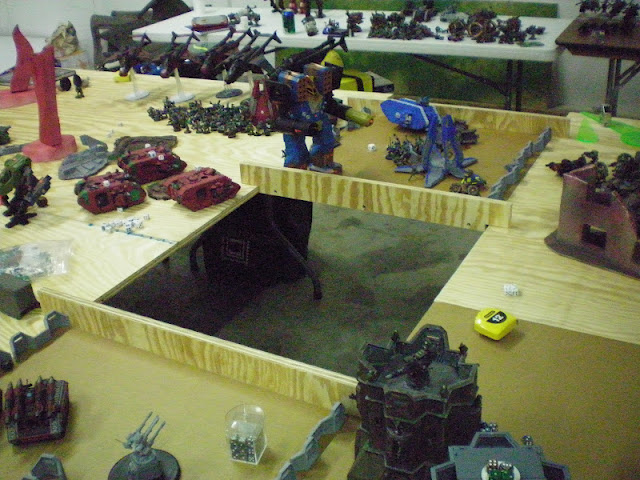 I had attached my Reclusairch to that squad, and to my chapters fluff is actually the functioning Chapter master named Proteus. With the Emporer's guidance Proteus passed his invulnerable save and lived. He then ran over and joined the sternguard squad that was sitting on the objective and inspired them to become fearless. On the next turn, the same Titan blasted away the entire sterngaurd squad, leaving only Proteus again in the open. 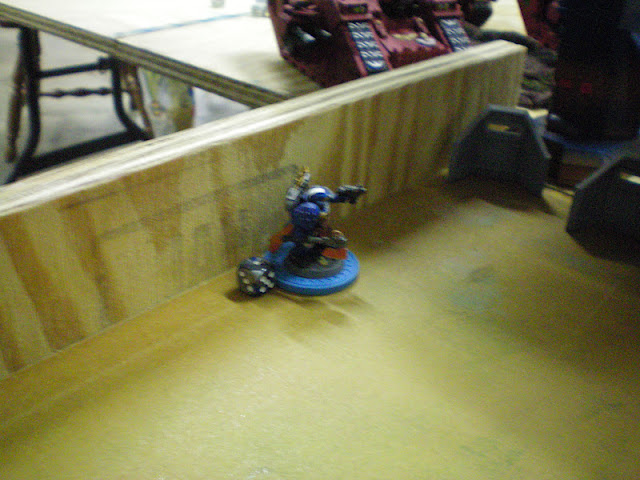 It was coming down to the final turn, and Proteus, Chapter Master of the Plasma Drakes, High Reclusiarch and Lord of the Lungs was the only model left on this bridge in the ork half of the table. Orks were coming in from either side. He defiantly stood upon the objective, daring all to come at him.

Countless Big Shootas and small arms fire flew across the bridge as no less than three Super heavies opened fire upon him. Two more D strength blasts were laid down on Proteus.

All invulnerable saves and armor saves were passed. Some 12+ lethal wounds were scoffed at. In frustration, the lead Titan charged, intending to squash the pesk below him. A grin spread across my face as I looked up my army list. Having 5 points to spare, and being with the rage filled death company, I had purchased Proteus melta bombs, and he was now in combat with an ork Stompa. Sadly even Astardes have their limits, and it was there that Proteus fell. 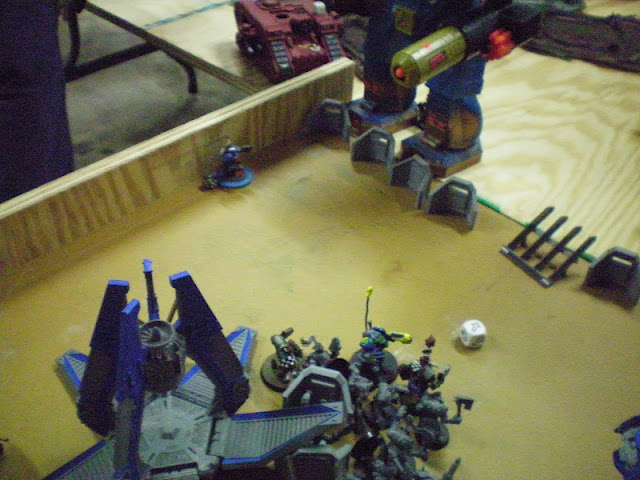 But it was through his might and courage that many others held their ground. As the dust settled, it was an evenly fought battle and the Imperium had held its lines long enough. The objectives held were 5-5 (If I recall correctly) but with the loss of the Holy relic with the death of Vulkan, the orks claimed the victory for the battle.

Sadly, school-work kept me from attending the combat patrol tournament to complete my trifecta of 40k fun. But with some painting done, and some non-competative games under my belt, I feel my batteries have been recharged. With the last final weeks of school closing in, I hope to get back into the swing of things soon enough and be back at it. I encourage everyone to remember what it is that is fun about 40k, hobby and gaming, for them and embrace it.
posted by TheGraveMind at 5:04 PM