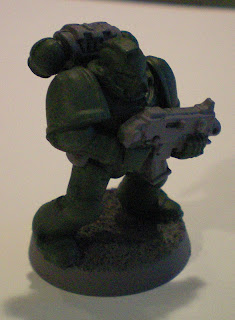 So Real Life has been kicking my tush as of late, what little free time I've had has been spent hobbying and very little gaming (but that is another post on its way). I did manage to make to the store and grabbed a few of the new paints. Here is my brief review from an amateur painter's perspective.

I decided to get some greens, since I felt that was the part of my spectrum that was lacking the most. I bought the green base known as "waaagh! flesh" and then I bought a layer paint. I went with "Warpstone glow" as it was the new color for snot green which I had to compare it too. I know these aren't the best pictures, but I hope it shows what I'm going to be saying. 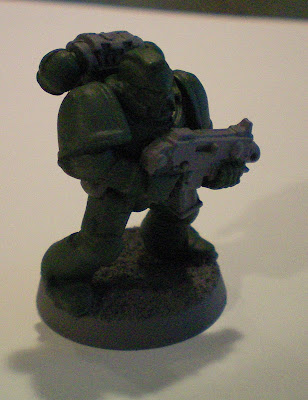 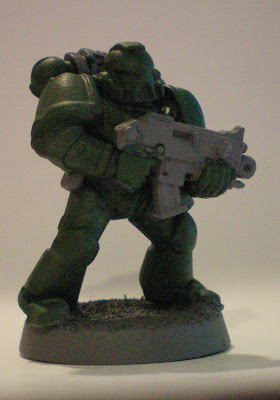 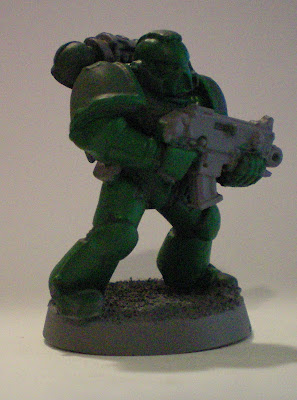 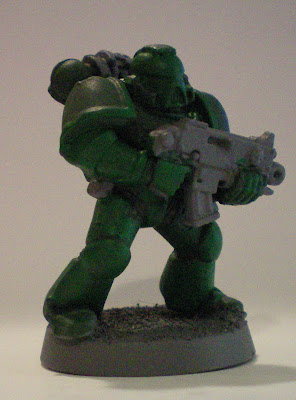 Just shaking the bottles and looking at the paints once you open the caps (which makes that new paint pop as you open a new bottle) you can tell they are a bit runnier than the old paints. This is in a good way as it isn't goopy and doesn't need to be extremely watered down or re-hydrated.

For any good test, you want to know where you want your results to be, and test to the extremes and find the limit. For the base paint I decided to just go to town and represent a very beginner. I just took my brush straight to the pot and plopped paint on the model. It may worth noting I did prime gray, so I'm not sure about white or black primed models. If I can find one of my old models with one of those primers I'll give it a test. So base paint straight to the model, very heavy handed as if I was applying a wash.

At first it sat on the model in puddles, but as I kept brushing over it, it smoothed out. To the point where I still had the detail of the etched squares on the marines armor plates. It dried very quickly, and had a nice smooth even coat. I won't lie, I was very surprised. At this point, I'd almost say the base paints had won me over, I can see them making painting very easy for newbies who are just starting to paint.

I moved on the the layer paint, deciding to try watering this one down. The problem I ran into was that since they were much thinner paints than their predecessors, that it was easily to make them to watery. After a few attempts of painting this watered down version, I decided it wasn't worth the hassle as I couldn't get a good even paint. I dabbed it up, and tried going straight from the pot again.
Here I will note that for anyone but beginners, it is probably still worth it to water these paints down, but it needs to bit more controlled than you may be used to, and may require some practice. That said, straight from the pot does not have the worst results.

Again I applied the paint a little thicker than I probably should have, but with a little more attention to where I was applying my brush. My main concern was that since I was going so quickly and harshly, that it may be too thinned out on the model, and that my brush strokes will become visible. But once it dried, it appeared as one even coat. Magic I say! I could still see the small details in the armor again.

For my last test, I took random sections of the marine's armor plating, and painted parts with the old green paint (snot green) that was watered down as to normal for the old paints, and applied it. Knowing where I painted on the model I know where to look, but for the life of me, I have a hard time finding the line that defines the region. They appear to be the same color, or as close as possible.

So by now I'm pretty convinced that GW is using witch craft or some other dark arts to create their paint line. They have seemingly found a way to make them almost noob proof and simple range.  Now everyone hold on to something, and have a seat..... These paints appear to be the same price!
I kid you not. GW has produce a superior product (albeit just paints) and kept them the same price. The apocalypse may be one step closer now.

So in summary, better viscosity, easily applied, and same price. The base paints may be well worth it, but the layer paints really aren't that much different from the vallejo lines. I have heard good things about the new glazes though, I might have to try them out.
posted by TheGraveMind at 7:06 AM