'Ard Boyz, Competition, and What I Like in a Tourney 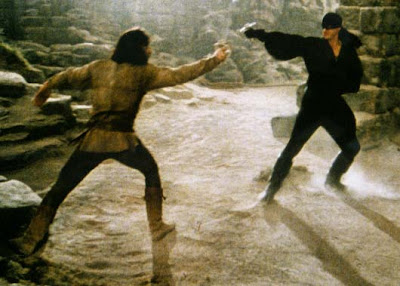 The discussion going on in the comments to Wienas' last post have got me thinking about the things I like and hate about the tourneys I've gone to. Which I can't fit into a paragraph or two of comments. So I decided to dedicate a new post to them.

I play this game to relax and socialize, not to beat people's faces in. When a tourney's results are based on win/lose instead of Battle Points, I'm very happy. Because I can worry less about bad matchups and enjoy a close game that will count just as much to my record in the tourney as the guy who brought the unbalanced beat stick and drew a Baby Seal for his first round.

I mean, think about this... The last person I wanted to play at 'Ard Boyz was Farmpunk (and vice-versa). Not because I can't ever beat him, or because I wouldn't have fun playing him. But because we're so evenly matched. If we draw each other in a round the resulting game will always be close. Which is BAD in 'Ard Boyz because the guy who beat up the baby seal will advance right past us. That's not right.

Neither is the joy I took in beating up my own baby Seal in the 2nd round of last year's prelims. I tabled him and took full points in a game that may well have soured the poor guy on all tourneys. But I needed those points for GW's crap scoring system.

Wienas summed it up nicely:


"Imagine if the Super Bowl were played that the two teams that accrued the most points over the season would face each other. The 2nd place team would be at such a disadvantage, that it may not matter whether they win or lose, unless they can cover the points difference."

Does anybody like watching a one-sided (American or European) football game? Or do you rejoice when the game is close and nail-biting? Why should the blowout be scored higher than a tight game? 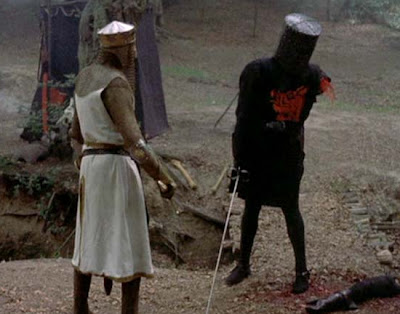 What's more exciting? This fight, or the one from the Princess Bride?

2) The System Can Be Changed

Why is this hobby mired in a flawed tourney system that the GW sales department crapped out as an afterthought back in the early 90's? You don't need battle points to determine a single winner. You just need enough rounds.

2 players need 1 round to determine a single undefeated winner.

So if you have 16 players in a tourney, but only play 3 rounds, you're always going to have 2 undefeated players. So be ready to either split the prize support or play another round. But don't let an overall winner be determined by degree of victory. Or you'll get WAAC behavior. Which is only made worse by the easily cheated player-scored sportsmanship that's typically used to try and curb the WAAC that the BP system put there in the first place.

3) GW Has Created The WAAC Phenomenon, Not The Players.

Battle-points encourage face-smashing and bad behavior. Win/Loss encourages fun and good sportsmanship. It's really as simple as that. Let's reform the system and get rid of the incentives to act badly.


4) 'Ard Boyz Is Not Competitive, We Only Pretend It Is.

look at 'ard boyz. a bunch of people reading this played in round 2. did anyone have a truly enjoyable game against someone they didn't know? if so, do you think it likely to happen again in that setting?

I had one enjoyable game, one horrible game, and a pathetic game against a friend where my attitude  was tainted by my bad experience in the 2nd game. So hey, I agree. I've attended 2 'Ard Boyz semi-finals now, and both were uncompetitive WAAC-fests that weren't worth the effort I put into attending them. Fueled by the BP system, sloppy random missions, and the ridiculously large prize.

This year I'll only be attending the Prelims, if at all. Instead, I'll concentrate on preparing for Adepticon and the Nova Open, which will offer true competitive events.

5) Reward Painting and Sportsmanship Separately From The Undefeated Player(s).

I like love painting as much as the next obsessive compulsive brush monkey, but please don't mix the scores for painting into the results of the game. Penalizing players who bring unpainted models is fine, but if they meet the minimum standard then call it good and move on.

Instead, hold (gasp!) a painting competition as a part of the event. Give a prize to the best Sportsman too. Determine a best all-round painting/modeling/play winner if you want. But don't screw over the guys who just want to play the game itself because they only meet the minimum standard.


6) Nobody Says You Can't Run Real Hobby Tourneys Too.

Who says we always have to play the game? Give everyone the same model and 2 hours to paint it. Next round, give them another. I'd come to that event too! So would a lot of people for whom the game itself is not very important compared to the hobby.

7) I Really Like The Last Few Events That Hive Fleet Indy Has Put On.

There's room for improvement, sure. But the Win/Loss system is really refreshing.

If it were, you wouldn't see the same group of players at the top tables tourney after tourney. So it's really more like poker, because your success depends on both luck AND skill.

And if you want to reduce the luck part, stop using BPs to score tourneys. :)
posted by SandWyrm at 1:36 PM