So attempting to clear some of my backlog before work. A couple weeks now, (man real life takes a lot of time), I got to face against Spaguatyrine's Space wolves for a long overdue game. There was only one outcome that could have happened.... I realized TWC are cheese! Well, they are powerful, but probably not a dairy product. Now we had found time to get our game in, but I had an arrangement later that evening, so we agreed to call time after around 2 hours.
Warning, Picture heavy long post!

Now unfortunate for me, Spaguatyrine won to go first. So he set up and readied his weapons. 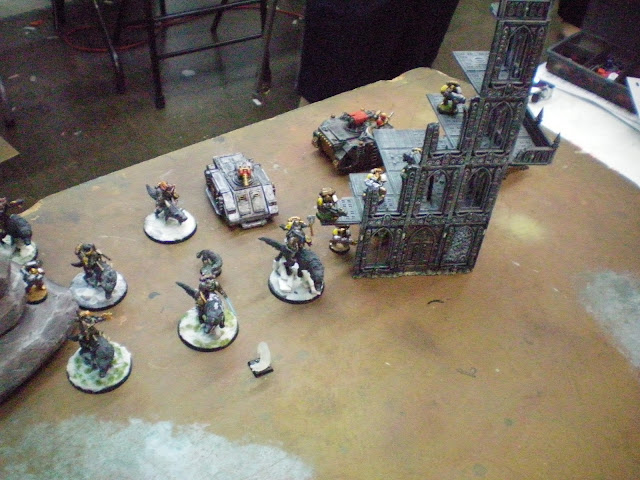 Now I'm still not completely sure what I could have done differently. Maybe I should have tried to come in from reserves, but I've had bad luck with that, so I stuck to the table. I tried to hug cover where I could, which in turn split my forces up. Well we learn from mistakes. Alpha strikes hurt. 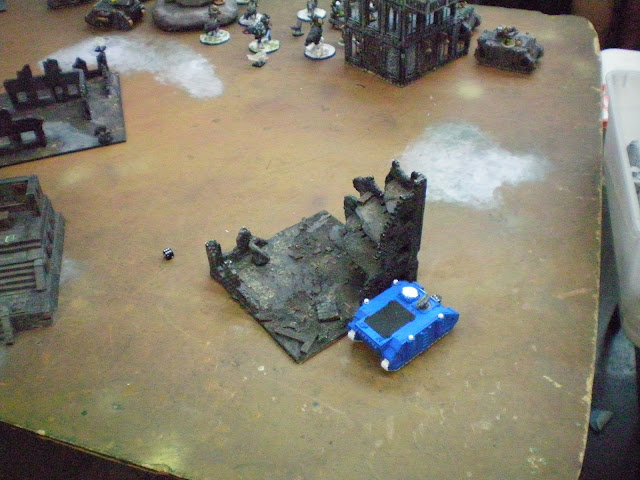 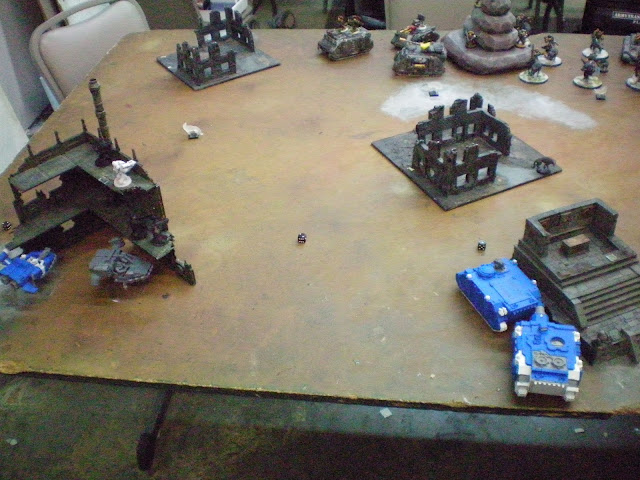 Oh ya, It was 12" deployment, with 4-5 objectives. The little wolf tokens around the board are the objectives, not the grey one in the TWC squad. 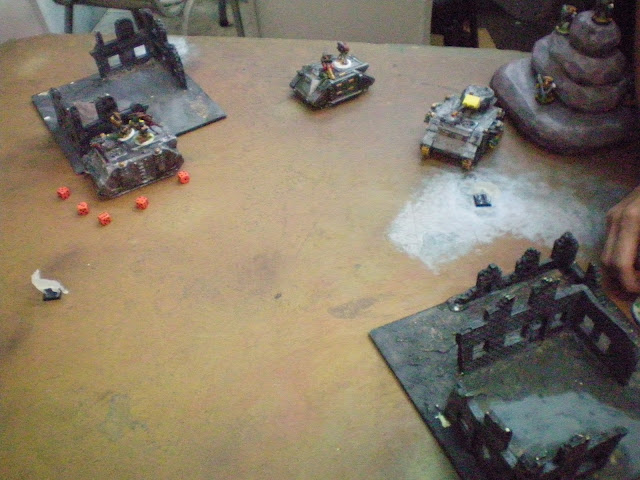 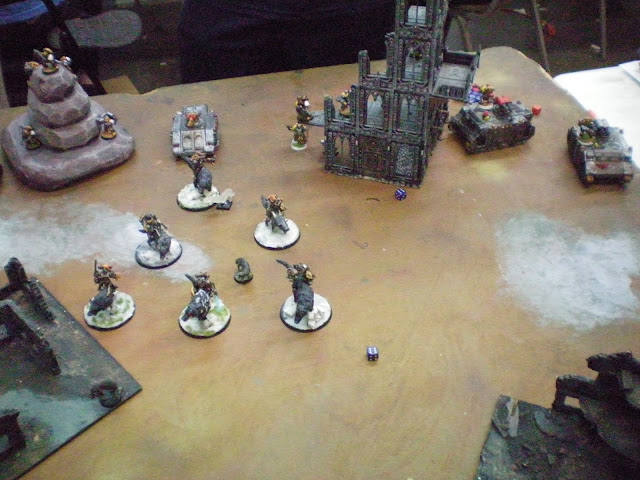 His first turn wasn't as bad as I thought, he moved up, popped some smoke, and fired  some weapons. 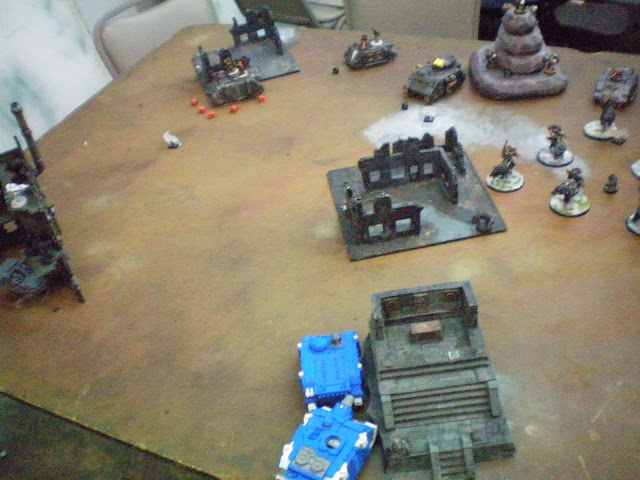 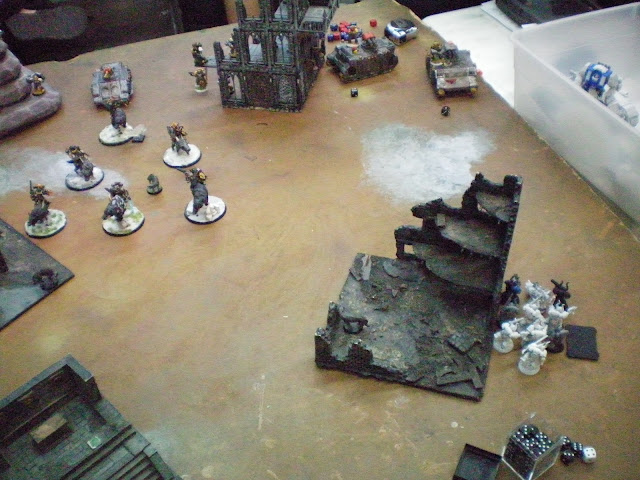 He did manage to destroy my far right Rhino, thus making an Assault squad foot slog till their death. 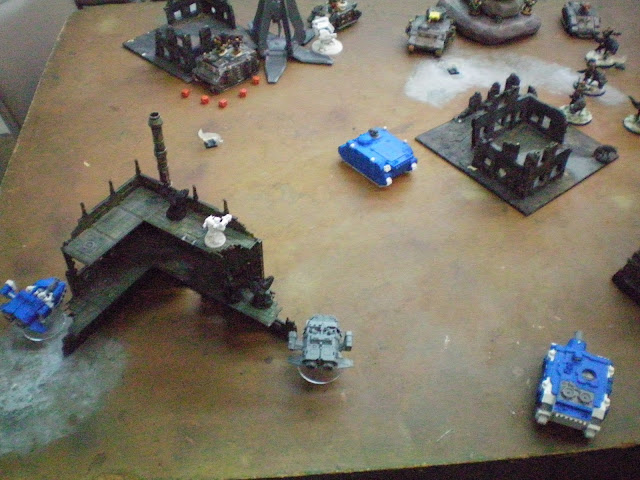 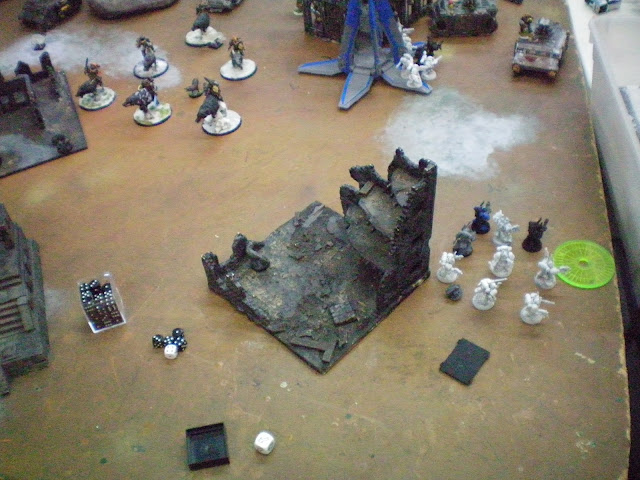 On my turn, my Honor Guard and Captain came in via Droppod, as did my heavy Dreadnought. I moved things out from behind to take some shots. 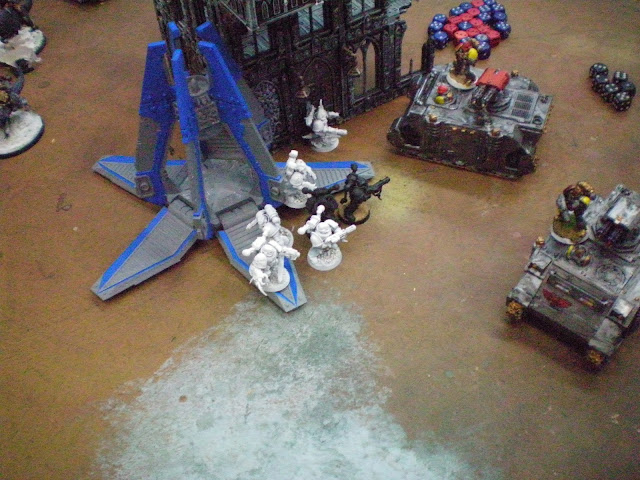 Captain jumped out from the squad, so the could split melta fire. The squad blew up the right Razorback, while the captain got a shaken/ weapon destroyed on the other. 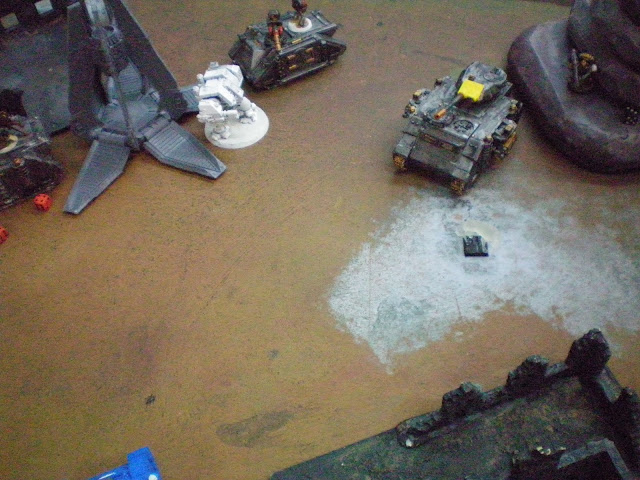 My Dread dropped in between some tanks, and I tried to remove the predator from the game. Little did I know that predator was invincible. Multi-melta and Missile launcher did nothing. 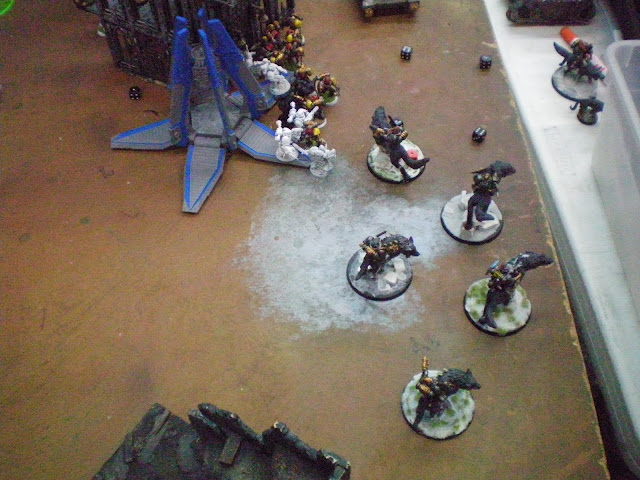 Fearing I'd hit his long fangs next, Spaguatyrine Assaulted my Honor squad with one hunter pack, and my captain with the other. His TWC smashed my 10 man assault squad to bits, and consolidated toward my hq. He had another squad jump out of a rhino, leaving the rune priest in it for protection. They tried to melta my Dread's back armor, but only immobilized it. 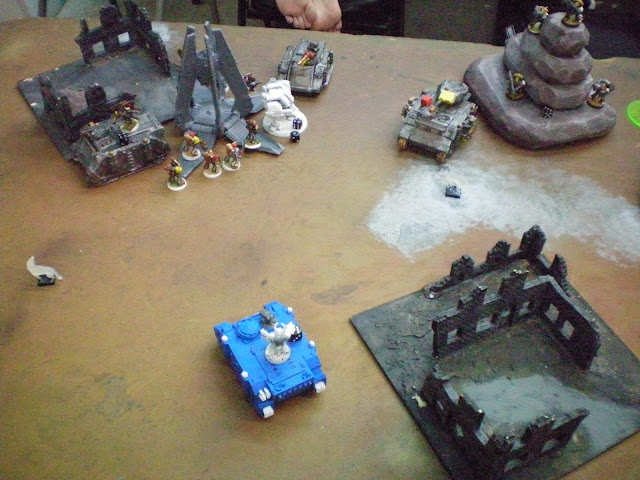 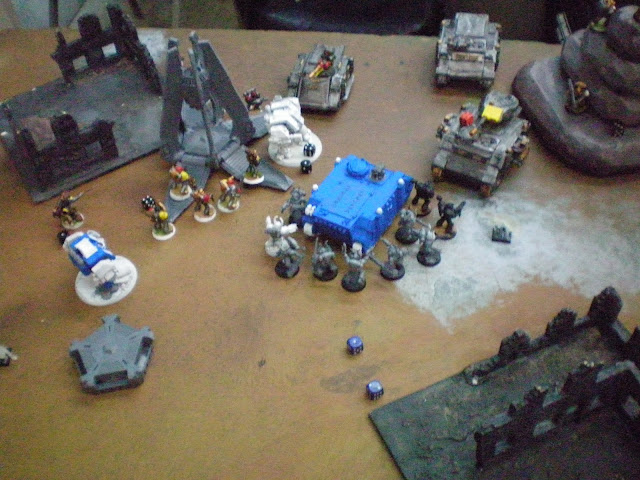 My Furioso Dread arrived, landing by the rune priest. Here I made a mistake, I decided to pop the rune priest with his meltagun, instead I should have roasted that troop squad. I also drove my other assault squad forwards, jumping them all out, and preparing for maximum damage and casualties. 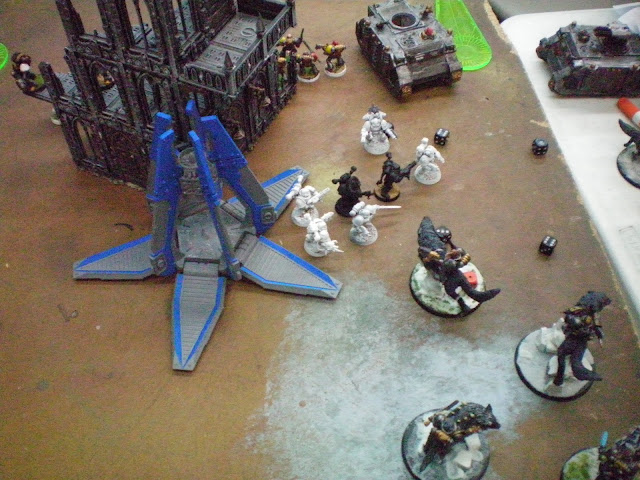 On the other side, My captain won combat, and that squad fled. The honor guard wiped out their opponents. I consolidated trying to block off my captain so I could have him assault back in, but it didn't work out too well. Lets just say they died in glory of combat. 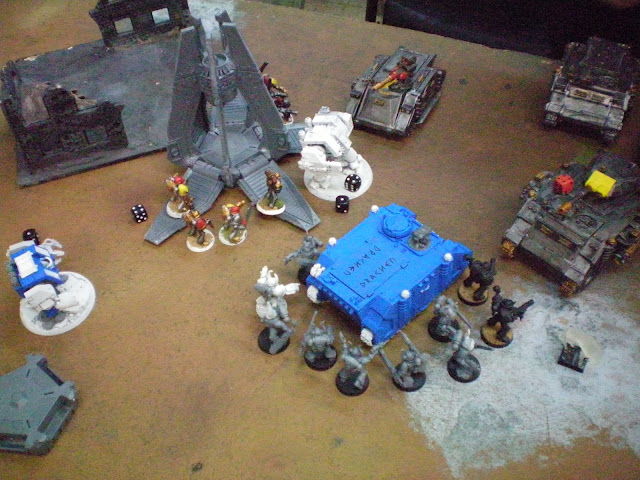 The invincible Predator was at it again. My heavy dread was almost constantly shaken until the last turn. I fired tons of missiles into the predator to no effect. I had two meltaguns at point blank range. As the story goes, I went to roll my two melta shots, Spaguatyrine cheered out a "whiff!" and as the dice settled, ...snake Eyes. Both miss to hit. Predator lives another turn. 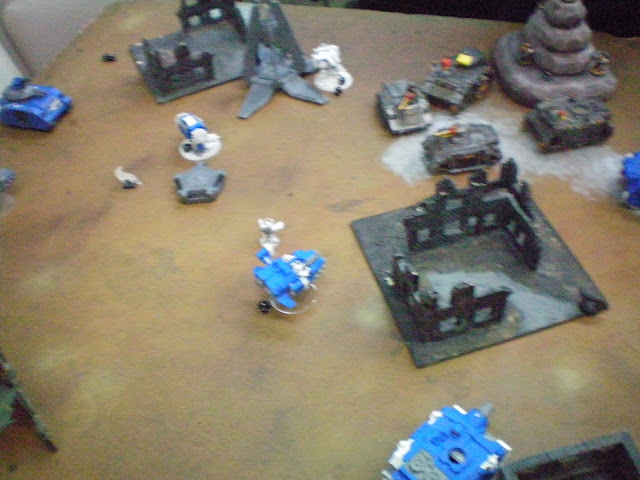 He blasts my infantry away with long fangs, my rhino evacuates to try and contest an objective, (wrong one, ugh) 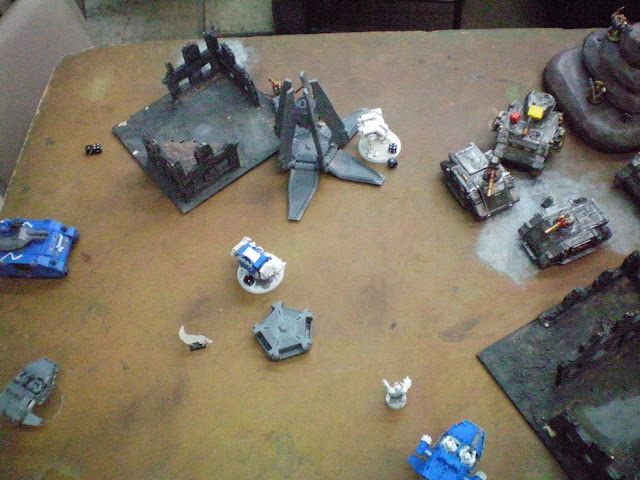 My baal finally comes on the table, and does what the other half of my army couldn't, and kills one of the Hunter squads with three rends. 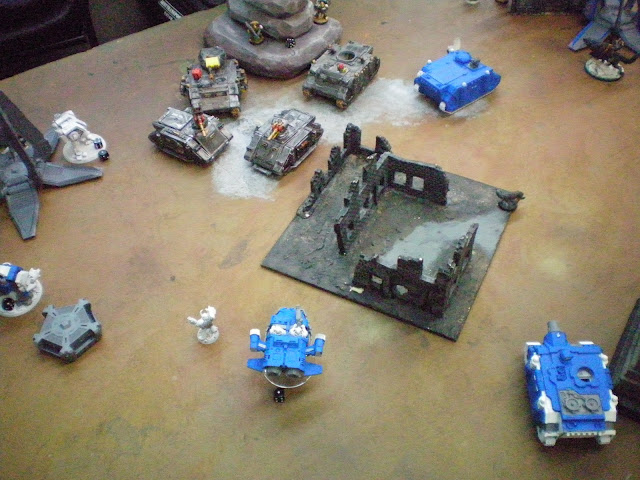 He has 5 guys left in a razorback, I have 1 sergeant with a powerfist. All of my heavy fire goes into trying to pop his razorback so I can get his troops dead and make it a draw. Everything fails for me, so I have to use my vindicator, which for the first time since round 1, was able to fire. I was saving it to hit the troops, but I managed to blow up the razorback with it. Because my dreadnought had to fire at the razorback, he cannot assault. 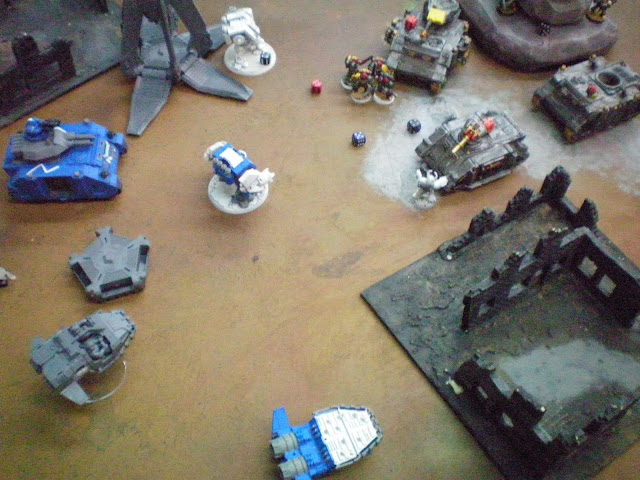 Last ditch effort, my Powerfist assaults the empty razorback, trying to get into range to contest, and is just out.
Win goes to Spaguatyrine! A game well played. Hope I didn't forget any crucial things that happened that game. I think we both learned a few things, and it was a very pleasant game. I look forward to facing him again someday, with a little bit more experience, and a lot more knowledge under my belt.

posted by TheGraveMind at 11:46 AM