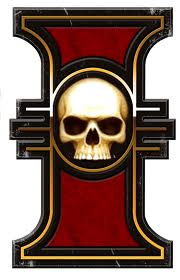 I play with 4 Chaos Daemon players in my home store alone and am I anti Daemon....? The answer is absolutely YES!

At Games 2 Die 4 it is almost a regular Saturday to see 3 daemon armies on the tables playing at once. I am used to playing a particular build which is really tough to deal with for most players. We like to travel together for tournaments around the area and it never seems to amaze me how many people still don't realize how nasty Daemons can be. In the past 4 tournaments I have been to which include 3 single player tournaments and 1 doubles tournament, Daemons have placed in the top 3 every time! In the most recent 28 player tournament Daemons placed tied for 1st with me and 3rd. The internet will tell you the Chaos Daemon Army is not competitive, and that all you have to do is take down the big guys with lots of shooting. Well I am here to throw a big pile of poo on that concept. Obviously the internet doesn't play the fatecrusher build that I have to deal with on a regular basis.

Fateweaver-Has a 3+ Invol save and allows all units within 6" to re-roll all saves.

2 to 3 units of bloodcrushers that are all given different wargear to allow for maximum wound allocation. 3+ Armor/5+ Invol

Troops that can change from Horrors to Plague Bearers to bloodletters depending on the need. Basically the player either chooses near impossible to kill objective holders like the plague bearers, stupidly incredible close combat units like bloodletters, or awesome shooty pink horrors.

Looking at this list or combinations of such and a normal person would think, "No big deal" Right?

In our game of 40K things get shot and die, or stabbed and die. Not with Fateweaver. Fateweaver is exactly what his name suggests. He takes the game that 97% of us play and turns it upside down on it's head. He changes the normal rules of how the game of 40K is played. He changes the math. Math that should work with fateweaver seldom do. A blood crusher who takes 3 crack missles to the face should have to take an average of 2 5+ involuntary saves. He should fail 1 or both and die in 1 or 2 turns. With fateweaver he has nearly a 75% chance to not even take a wound. Now my math may not be exact, and Dodger3 corrects me everytime on this, but this is not normal. Daemon's were made to wipe out Space Marine armies. I have seen really good players get wiped to the man in 3 turns and stand at the table not knowing what hit them. I got wiped my first game as a strong player and the whiplash still hurts to this day. 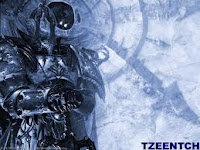 Yes I know:
Fateweaver can die by 1 bolter on turn 1. But the chance of that is nearly impossible. As Dodger3 how explained it takes 27 wounds to kill Fateweaver on average. That is 27 wounds against a Toughness 5 monstrous creature. Really? Stupid! If he does take an unsaved wound he has to pass a leadership test or fly away.

It is a boring list. Who cares, when Dodger3 can loose Fateweaver on turn 1 and still own most other players it still curb stomps most people. Now one could say Dodger3 is a phenomenon, but I have seen all 4 of the Daemon players do the same thing to unexpecting players.

Chaos Daemons shouldn't mix thier Gods: Again who cares if it helps them win.

Chaos Daemons don't have long range shooting:They don't have to, they drop next to you and if you have the Lord of Change or Fateweaver of both, they can split fire to 3, count it, 3 different targets and assault any of the three. They can also turn your Marneus Calgar into a Chaos Spawn on a 5 or 6.

Getting back to this article, I picked up Daemonhunters to combat the aweful Chaos Daemons and cannot wait to get my hands on the new Codex whenever it comes out. I will be publishing a few tricks I have learned to help in the fight against Chaos Daemons. These are just suggestions from my point of view from fighting Daemon's on a regular basis mostly from mistakes I have made.

#1. Undestanding Daemon deployment. The Daemon player must split their army into 2 groups and roll randomly to determine which half they get. On a 3+ they get their preferred half. Really think about this. Even if the Daemon player goes first, he can deploy his army after you deploy yours and gets to choose who has the best ability to criple your army on his first drop. (A little overpowered all by itself)

#2. Choosing to let the Daemon Player go 1st in any game with Dawn of War deployment is a MUST!!!

This accomplishes 2 things. You of course should not deploy anything and bring all your units in on your first turn and allow the Daemon Player to choose how to split their army as indicated above on no information which is what normal armies do, and GET 1 LESS ROUND OF SHOOTING AND ASSAULT. Essetially the Dawn of War can flip the strategy back in your favor for deployment.

#3. When choosing what table quarter, side of the table etc, don't always take the side that gives you the most cover, but the area that gives him the least amount of cover. I.E. make him move through open ground to get to you. Fateweaver also allows allows cover saves to be re-rolled.

#4. If you want to get rid of Fateweaver, concentrate or dedicate a large amount of shooting to do so in one turn or until he is done. Like Dodger3 says, 27 wounds should do it. The more he has to roll, the more he will fly away or just die. Isolating Fateweaver can also be usefull as the bloodcrushers need him for the first 2 rounds to get where they are going and then they can move on using cover saves and such.

#5 Bunching up in one big blob is not always the best tactic. Mech armies can be very troublesome if you keep moving. Daemons do have a hard time catching fast moving armies if they don't stop you on the drop. Don't be afraid to run to fight for another turn or so.

Obviously there are many more Anti-Daemon Tactics that we will go into in the future as well as other strategies to deal with difficult army builds. How can we rise together to fight the Chaos Daemon tide?


What are your thoughts?
posted by Spaguatyrine at 11:42 PM