FoW: The Battle Of El Sodor-mein 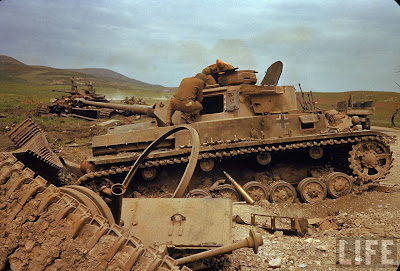 A couple of weeks ago Farmpunk and I had a Flames of War Battle down in the Man-Cave. We were a little sick of the same old hills/trees/rocks thing that we'd been doing for terrain up to that point. So we um... appropriated some of my kids' train toys to help re-create the famous battle between Patton and Rommel at the port of El Alamein. ;)


We were playing with about 1750 points per side. I brought along some Flammpanzers (flame tanks) and StuG assault guns as I wanted to try them out. 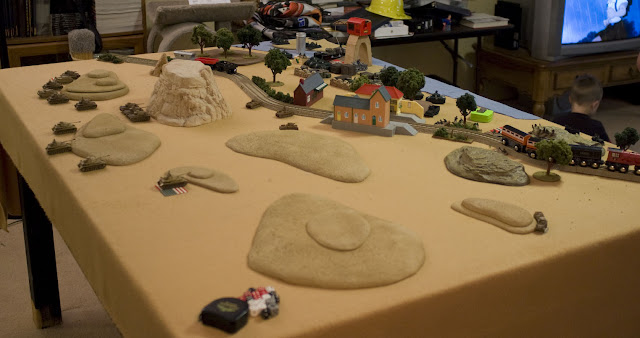 As you can see, we set up an attack from the desert, across a rail line, and towards a port full of supplies. Bullstrode sat at the dock. :) 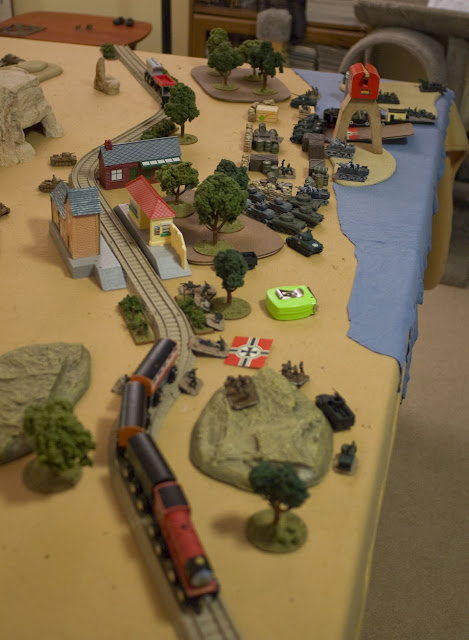 The trains look a bit silly. But the plastic Thomas track isn't that bad. I decided after the battle to keep some in the terrain box I usually take to the North Store. The 'ocean' was made from an old T-Shirt that I cut up. 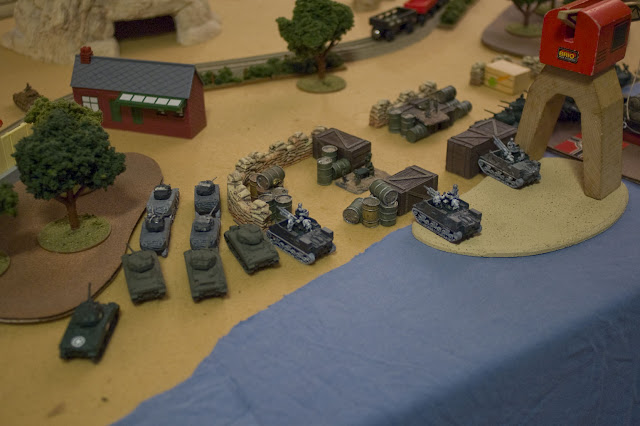 Of course Farmpunk decides to play a tank company instead of the infantry I was hoping to flame. Then he wins the roll to pick sides. Oh well. As you can see he's been stripping Spag's old models and spraying them with a more realistic olive color. 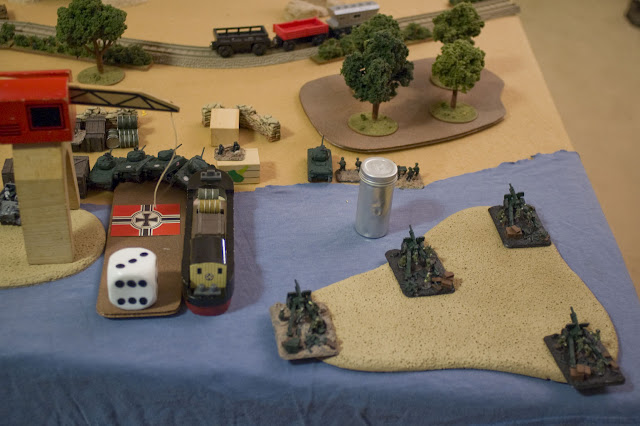 His artillery set up on a sandbar by the 'dock'. The big white die is there to counterbalance the tanks on the far end. 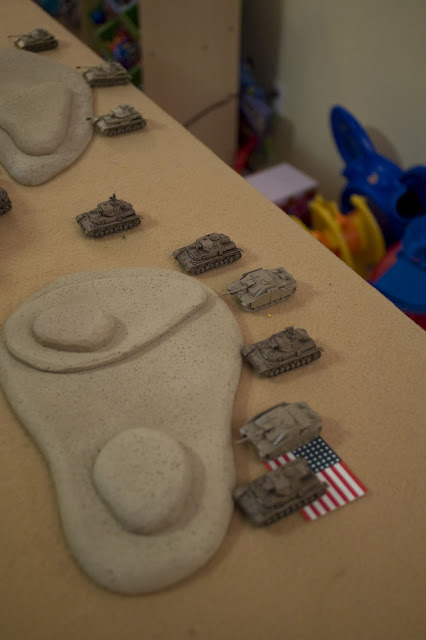 On my left, I deploy the StuGs and the PzIV F1's. 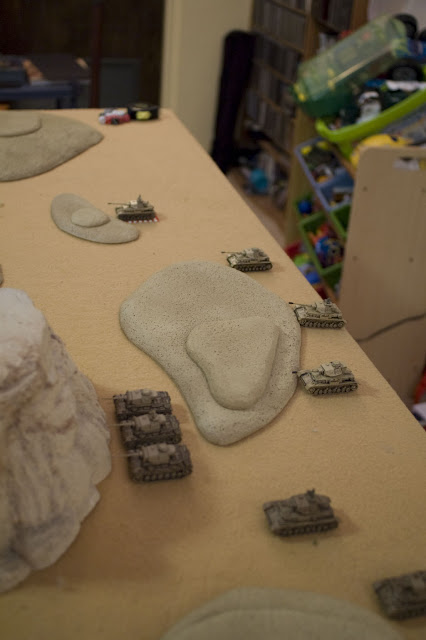 The Flamms are in the middle, my PzIV F2's are over on the right. 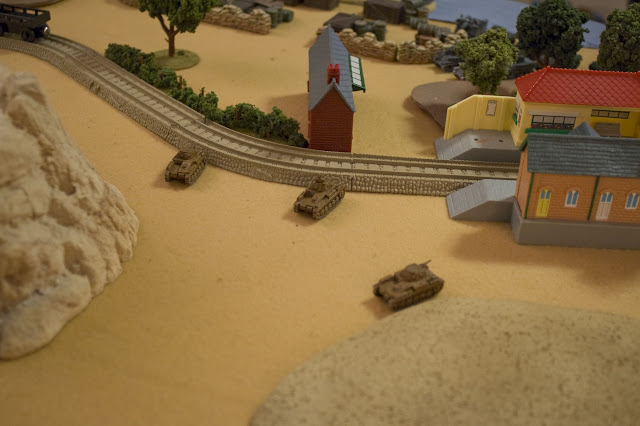 My PzII's go right up the middle. But there's no infantry to mess with, so I'm sort of wondering what to do with them. 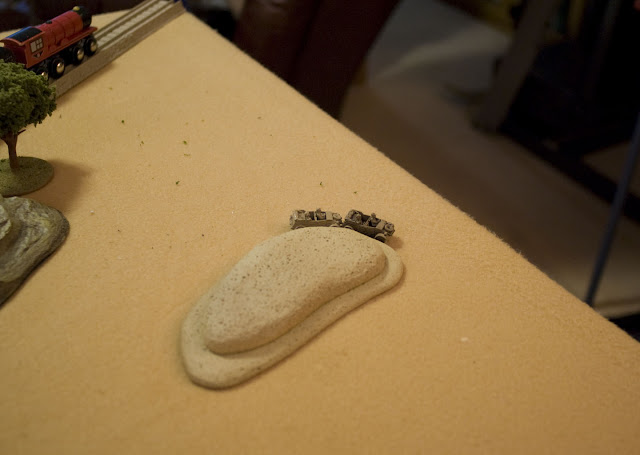 They should really have been over on the right chasing down Farmpunk's Tank Destroyer spotters in their stolen Kübelwagens. 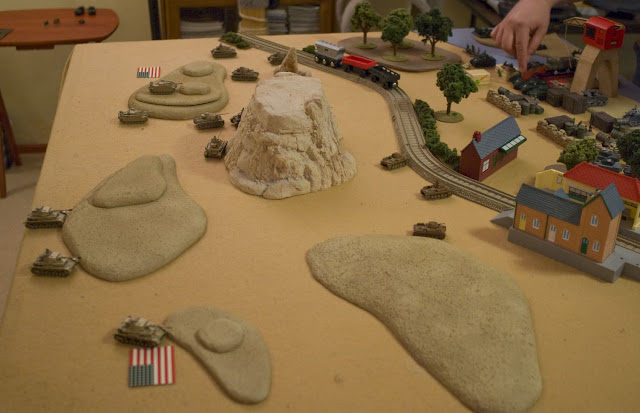 In fact, my whole deployment is pretty screwy. The easier objective for me to grab is on the right, but I can't concentrate there because I have to be able to defend on the left too. And someone (me) put the entrance to Cobra headquarters in the middle of the table. So I'm forced to go left where Farmpunk is strongest because the right is easier to defend without infantry. Teams on the right can also cover the left objective with ranged fire if something breaks through over there.

Buuuuuut... If I was going to do that, I should have put the StuGs on the right and the F2's on the left. Because over on the right I didn't have that many targets. While on the left I could have used the extra shots all game long. 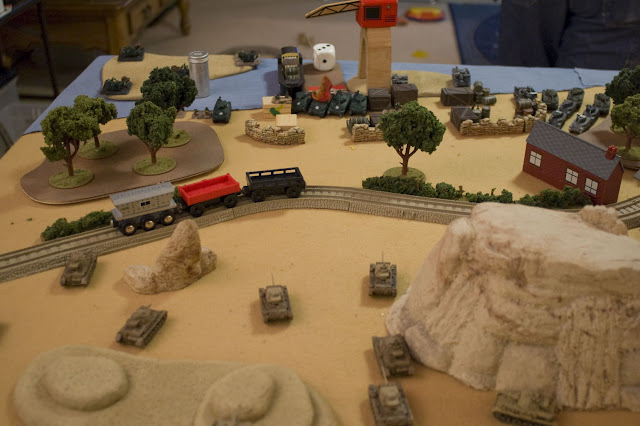 Anyway, here I go. Farmpunk's deployment wasn't a whole lot better than mine. He thought that because he was the 'attacker', he got to go first. But no, you have to roll off. So I get some free shots at his Shermans before they can move.  Fortunately for Farmpunk, he makes 2 of his 3 saves. 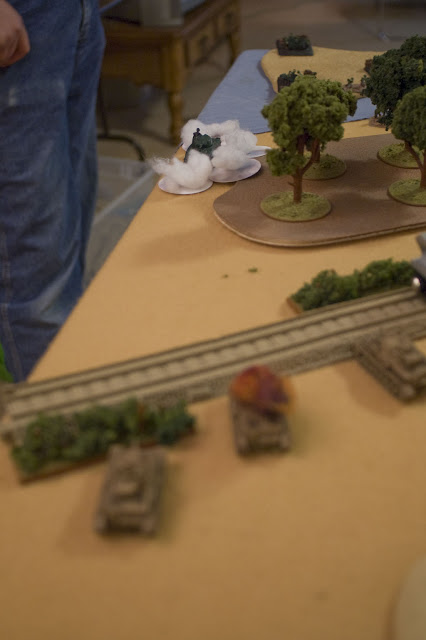 Here I smoke Farmpunk's 1iC as he peeks around the wood. 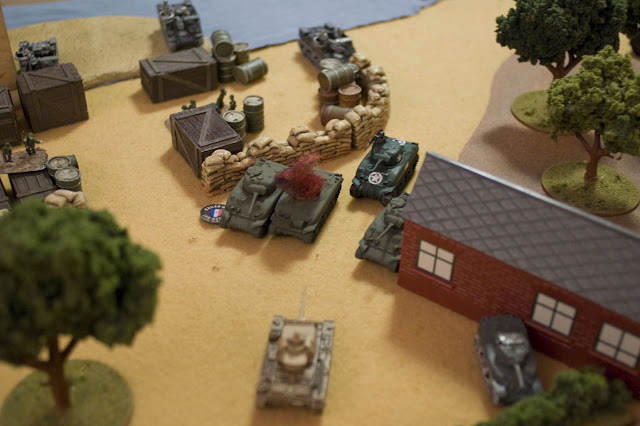 Of course, it only bails (stuns) you. If you multi-bail a tank, you actually can kill it with flamethrowers. But I wasn't remembering that rule right then. :) 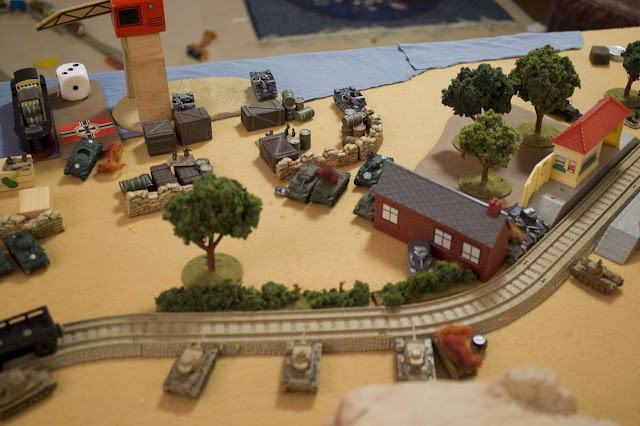 In the middle I have perfect shots on Farmpunk's Stuarts with 8 AT11 shots that he can't save against. But I whiff and only hit once. Ugh! 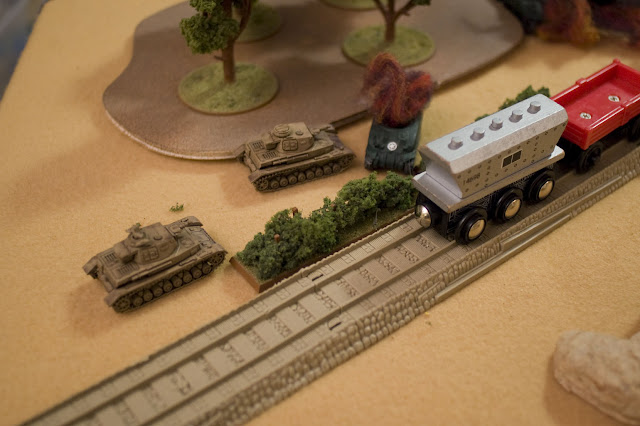 At least I killed the 1iC. 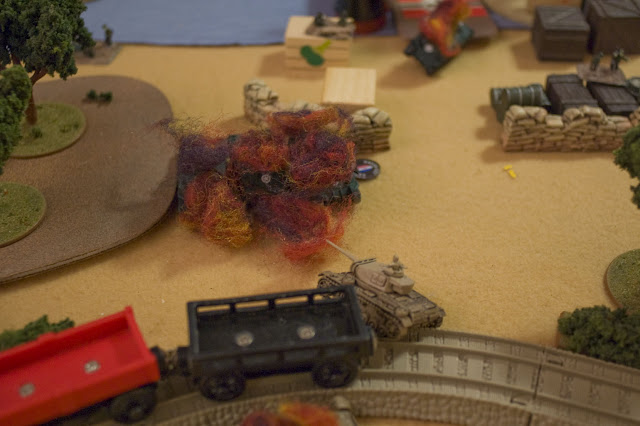 STUN IT WITH FIRE!!!

I had this silly idea that if I bailed all of Farmpunk's tanks, that he'd auto-fail his morale check (for the one dead tank at the dock) and run away. But no, that's not a real rule at all. :( 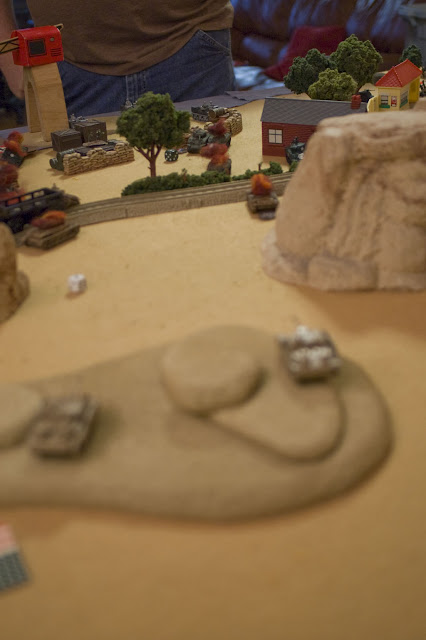 The StuGs are doing their job, but slowly. 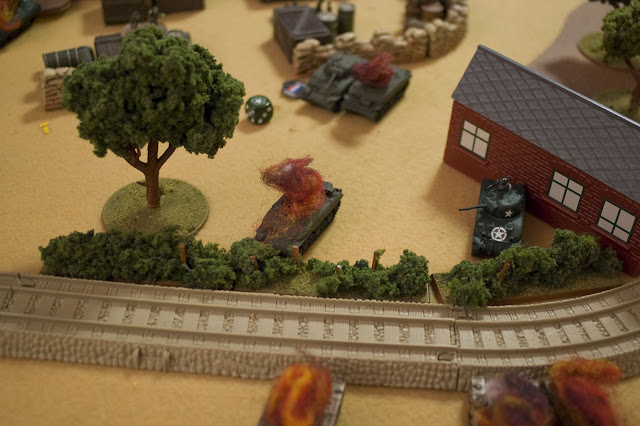 Farmpunk gets tired of pinging shots off of their armor and concentrates on the Flamms instead. They go bye-bye. 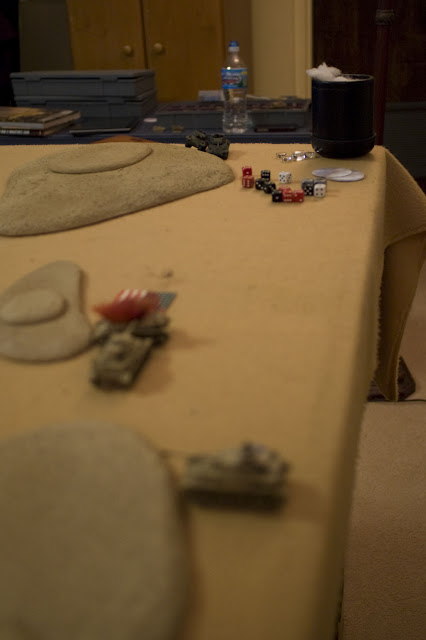 The M10's pop out on the far right and kill one F2. They bail another. 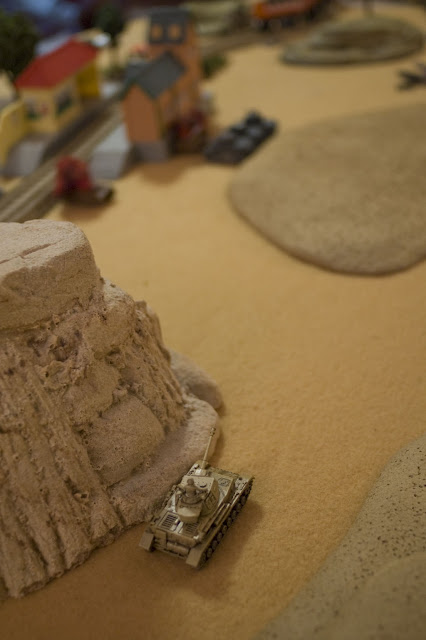 My 1iC gets a perfect bead on those Stuarts and... 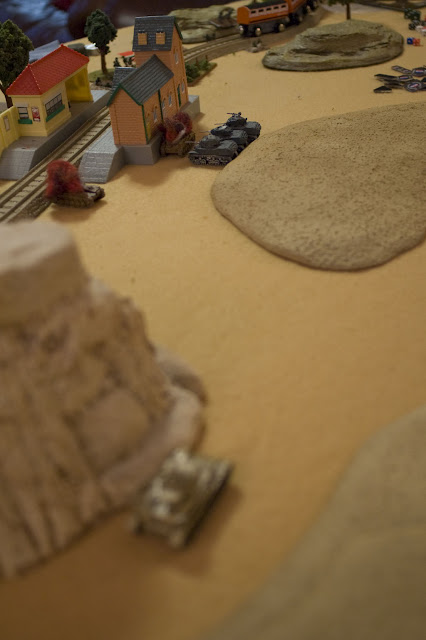 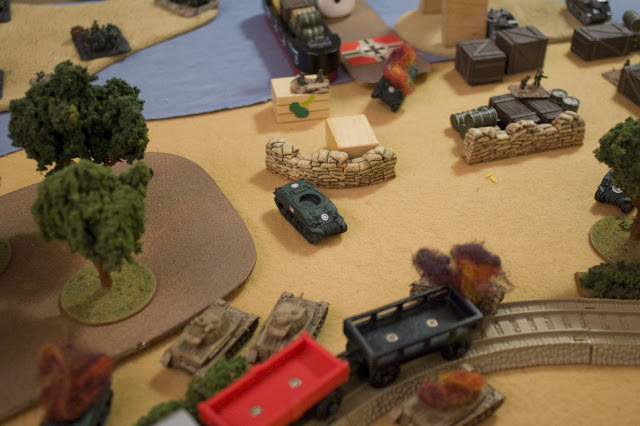 I finally run off all of Farmpunk's Shermans at the dock, but the Priests kill me. :( 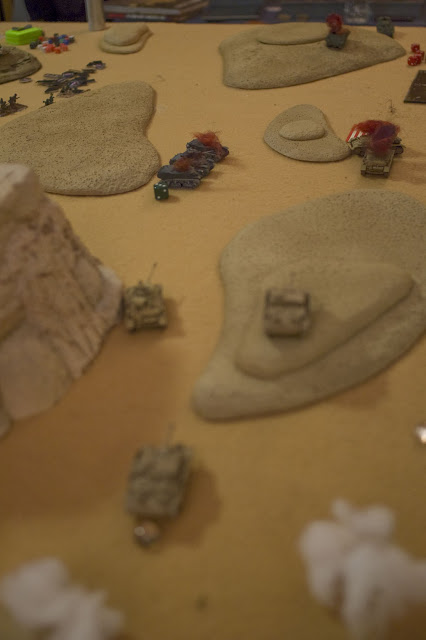 Now I'm trying to survive the push-back. The StuGs move to support the right, while my 1iC finally manages to pop 2 of the Stuarts. 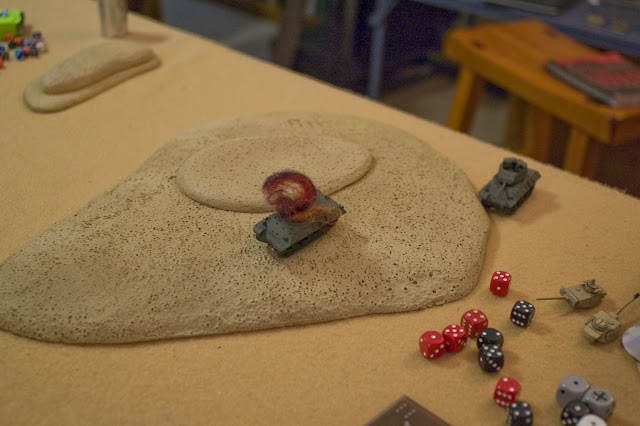 The StuGs take down an M10 that moved too far forward. 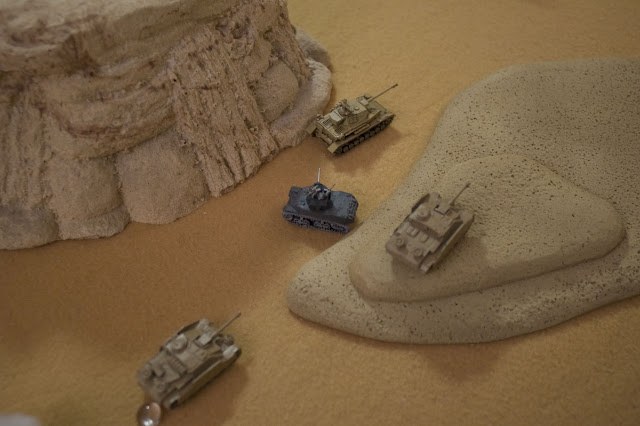 And here's the winning move. The last Stuart makes his morale check and zooms over behind my 1iC, killing him. Since I've lost 4 of my 6 platoons, this means that I'll auto-fail my company morale check and flee the field. Nice.

I can't say it was a great battle, as there were far too many stupid mistakes made on both sides. But it was a lot of fun. As Farmpunk said, it actually felt like something that could have happened historically.

I did find that I like the StuGs. Though I think that they're better suited to an infantry list.  The Flamms? Well, I might give them another go or two. :)
posted by SandWyrm at 10:30 PM