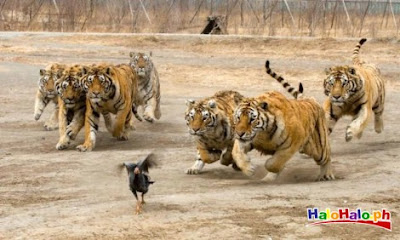 The US Snail delivered my Tigers yesterday. So after some quick (and very minimal) assembly, Farmpunk and I had a game down at the North Store after the D&D crowd left.

If we had really thought about the time we had to play in (2 hrs) and our own newb-ness, we probably would have tried a 1000 point game with just 2-3 Tigers versus a bunch of Shermans and some Wolverines. But no, I put down all 5 Tigers (1955 points), while Farmpunk decided to go with a big American paratrooper list using the models he borrowed from Spag. 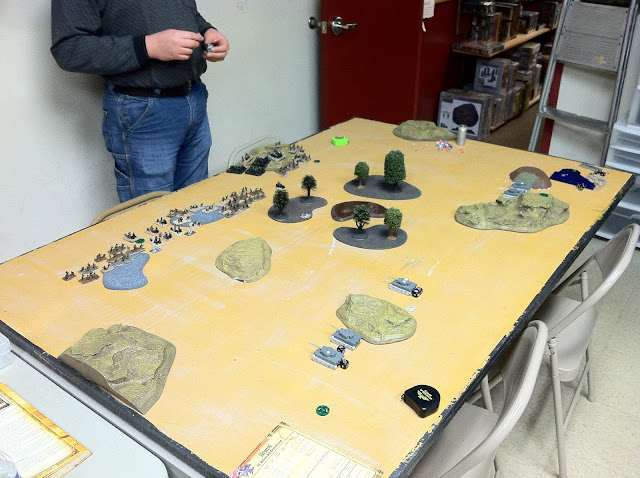 Setup. I've got 2 platoons with 2 Tigers each and a command Tiger. Our objectives are the small green circle-counters. I've got one platoon on each objective with the Command Tank in the middle. 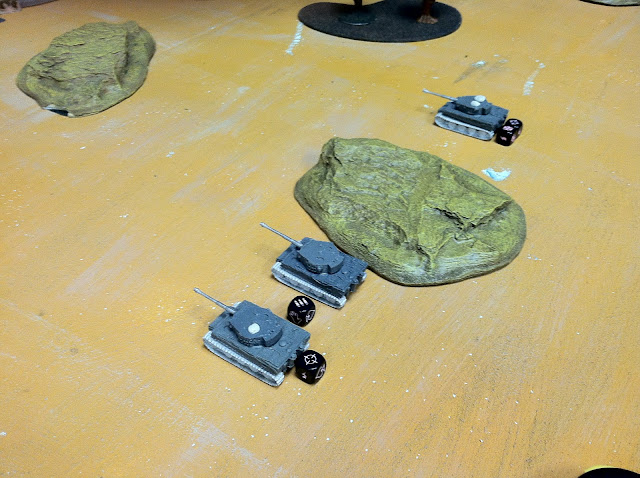 The Tiger box set came with some very nice extras. Like some dice that let you easily keep track of your Tiger-Ace skills. Every Tiger gets a random skill. This platoon got extra shots. Because I rolled well, the platoon commander also got a skill. He got to re-roll misses.

The Company Command Tank got re-rolls and the ability to pass moral checks on a 2+. In a 40K sense, this pretty much makes him un-stunnable. 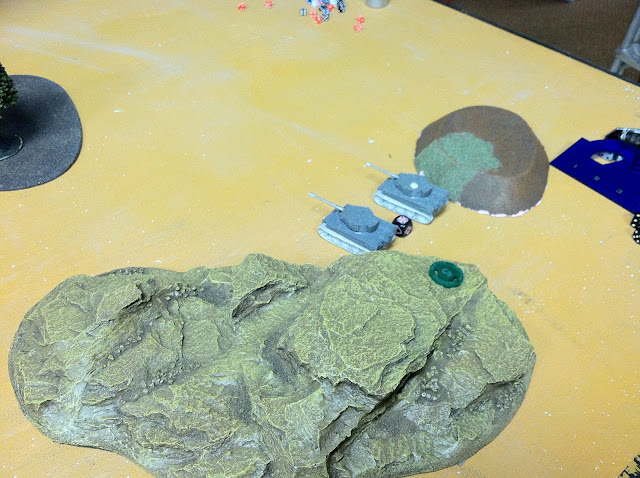 The platoon I put down on my right rolled up the 2+ moral skill too. 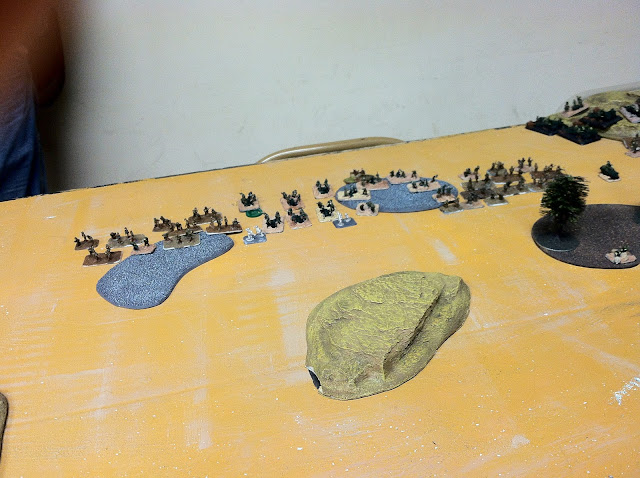 Farmpunk put a ton of infantry over on his right. With some howitzers in the middle of the blob. He's also got some spotters up in the woods so that he can lay down smoke on me more easily. 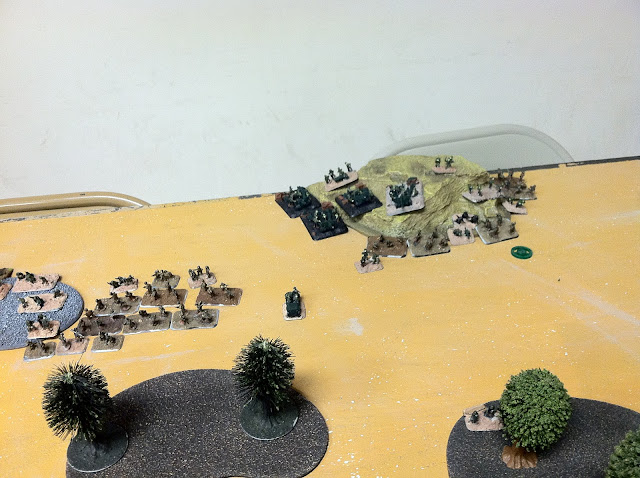 Over on his left are the big guns. He's got 2 Wolverine tank destroyers in reserve. 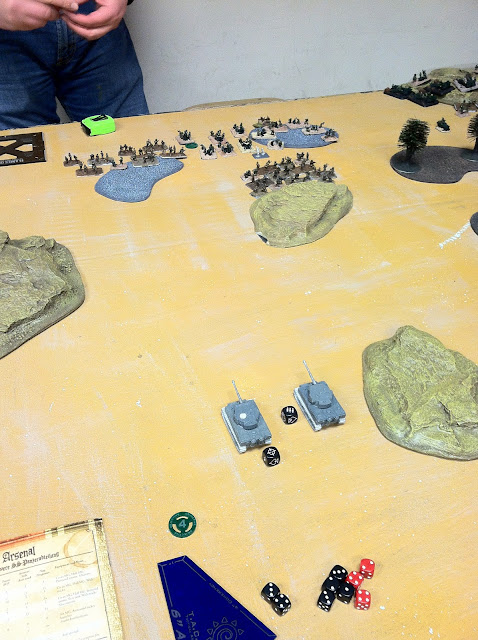 I win the roll to go first, so I kill a howitzer with the main guns from my leftward platoon. My Company Command tank kills the spotter in the woods to the right of the rock that infantry is hiding behind. 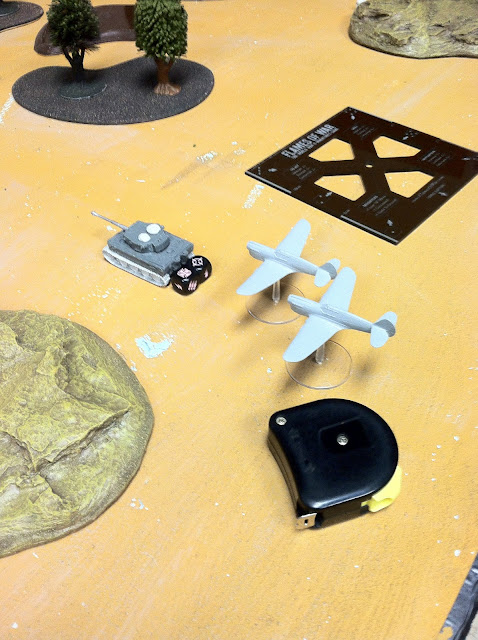 Farmpunk brings in an airstrike to threaten my company commander. But he whiffs the 2+ roll he needs to kill the tank. So I'm only bailed-out (stunned). At the beginning of my 2nd turn I make my 2+ morale check and get right back in, ready to keep fighting.

I kill an infantry base and a spotter on my 2nd turn. 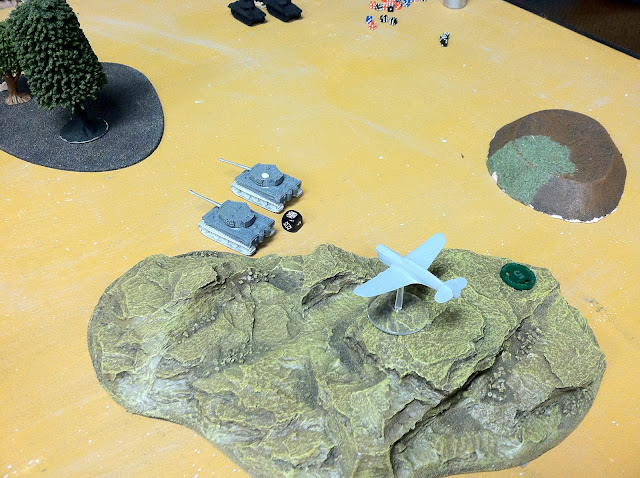 On Farmpunk's 2nd turn he gets one plane in, but he whiffs this one too. The Wolverines come in behind the trees and move to flank me, but he misses his shots.

I don't think, looking at this battle, that I could have done enough damage with the Tigers to push Farmpunk off of an objective. While Farmpunk just plain doesn't have many options for popping a Tiger. Planes and Artillery. That's pretty much it. His best tanks can only stun a Tiger from the front. While a side shot only gives him a 1 in 12 chance of a kill.

But, I think he could do well with some fast Stuarts to run past me and some Shermans for tying me up while they grab an objective.

I, on the other hand, need some artillery for killing troops and some infantry to hold objectives while I run my kitties across the table.

My ultimate goal though, is to run a proper North Africa list with PzIII's and PzIV's to do most of the work. With just one or two Tigers to lead the assaults. All-Tiger lists are from the Italian campaign, which is not the period I'm really interested in.
posted by SandWyrm at 5:30 PM