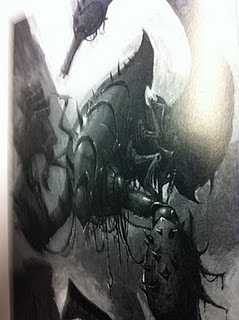 I have had 6 games with my dark eldar and have been pleasantly surprised by the Talos Pain Engine.  Most people will tell you not to take this model because he is slow, has random attacks and his ballistic skill 3 isn't good enough.  Well I say bah humbug to that!

In the style of fast moving, assault oriented dark eldar list which has moderate long range fire support and massive mid range fire support, the Talos pain engine has done very well for me so far.  To date I have played:

The testing is continuing to go well but I need to get some more games against marine style armies.  I am still using 1 webway portal and have been able to get the portal to a good spot on the board every game. Whether I hide them with the hellions if I am going second so he can leave and drop them, or put them with some Trueborn when I go first.   The Webway portal has been the key to the success of the pain engine.

The way I run my pain engine:

I know you are thinking why not a heat lance even with the portal?  Well I have thought long and hard on this and am testing the use of haywire blasters in my army. I have 2 units of scourges which have 2 each and the one on my pain engine.  The haywire blaster in my opinion is one of the best weapons in the DE codex.  It is the same as the grenade but has a 24" range! So yes, that landraider with armor 14, here you go! Can't shoot or immobilized, or if I am lucky, wrecked.  On a roll of a 6 after hitting I get a penetration hit....from  a strength 4 weapon....that has a 24" range.....on scourges who are jump infantry and my pain engine.  Not a bad tactic.  Against open topped vehicles the haywire blasters have owned them.  My last 2 games against Necron's my Pain engine wrecked, 1 annihilation barge, 3 ghost arcs, 1 stalker, 1 doomsday arc, and a unit of warriors.

His toughness 7 and strength 7 make him feared and tough to kill.  The twin linked liquifier gun which is a random d6 ap makes him scary to swarms and normal infantry.  50% to roast armor 3+ :).

In Close combat he is good against MEQ as he has weapon skill 5 and strength 7, but his random d6 attacks can be helpful, but can be horrible as well.  He is initiative 4 which helps with being such a large creature against dreadnoughts, carnifexes, etc.  With 2 pain tokens he can get to initiative 5 with furious charge and strength 8 which is great as well.

His 3+ save and toughness 7 is great because he can shrug off lots of small arms firepower and requires heavy weapon shots to take him down which of course takes the heavy weapons focus away from other important units.

I will continue playtest and write a full report soon!

Beautiful!!!!
posted by Spaguatyrine at 9:10 AM