So... Who Wants To Buy A Nicely Painted Army? 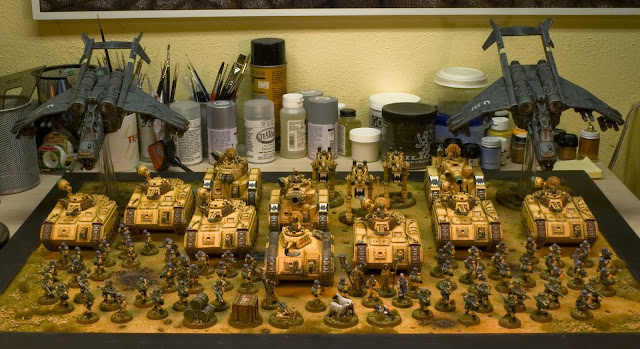 Alas, the time has finally come for me to say goodbye to the Tallarn 13th. If I can get a good price for it, that is. I'll be putting them up on eBay later today.

No, I'm not quitting 40K. But I want to move on. I want to collect new armies and finish painting the ones I already have. So the Guard have to go. Lest I do nothing but tweak and add to my Guard to the exclusion of everything else I'm interested in. Thirteen years is enough time to devote to just one army. At some point you just have to stop. Besides which, I'm sick to death of painting Bronzed Flesh!

So I'll play my Blood Angels for a while, get them painted up, and see what else I want to collect next spring. Depending on how things go with upcoming releases, that new project might be making an army out of the used Tau I have sitting in a box. Or an AdMech version of the new Necrons once they've been properly FAQ-ed.

But anyhow, here's a rundown of what you'll get with this army:

Now for some pics. Click on any picture for a larger view.

These have been modified with a set-back look to more closely resemble a Bradley Fighting Vehicle. 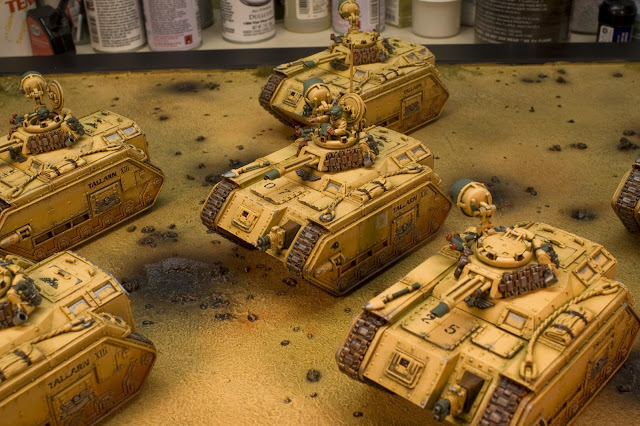 The Command Chimera is the one with the aerial in the middle. Number 7.

Each is individually numbered.

What we have here are 6 flawlessly converted set-back Chimeras that will have everyone asking you if they came from Forge World.

Seriously, that's what everyone asks. 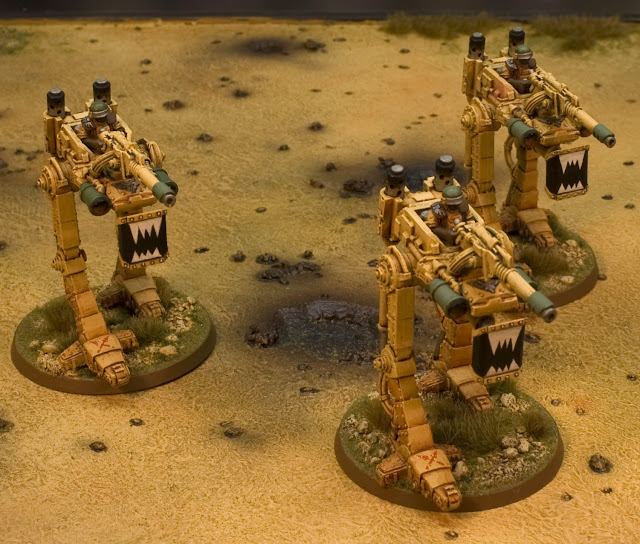 These are old 2nd Edition Metal Sentinels that have been modified. The assault cannons were traded for 2nd Edition Lascannons (I use them as Autocannons mostly), and they have hydraulic push-plates in front that used to be a justification for a close-combat doctrine from the 4th Edition IG Codex. But they looked so cool that I left them on. 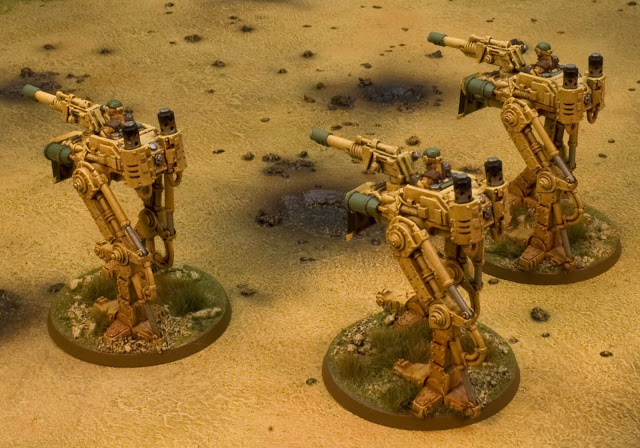 These are probably my favorite models of the entire collection. They have loads of character. 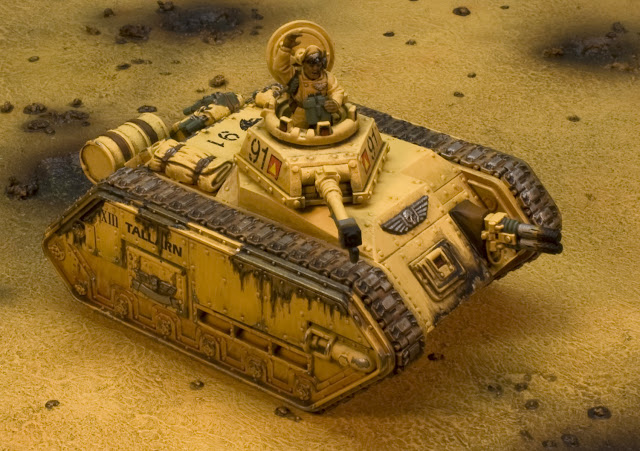 I can't stand the official Hellhound model. So I converted this one up from a standard Chimera. The promethium tanks are inside where the enemy can't shoot them open. The hull weapon is a Multi-Melta. 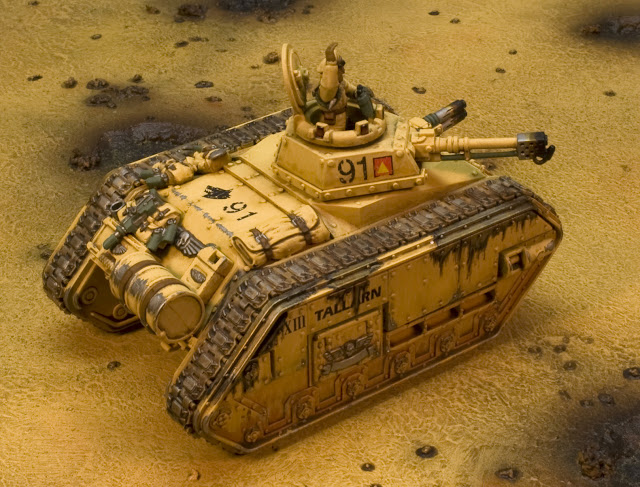 The scorch marks on the hull are where Promethium got splashed on the hull from the Inferno Cannon and burned away the paint. 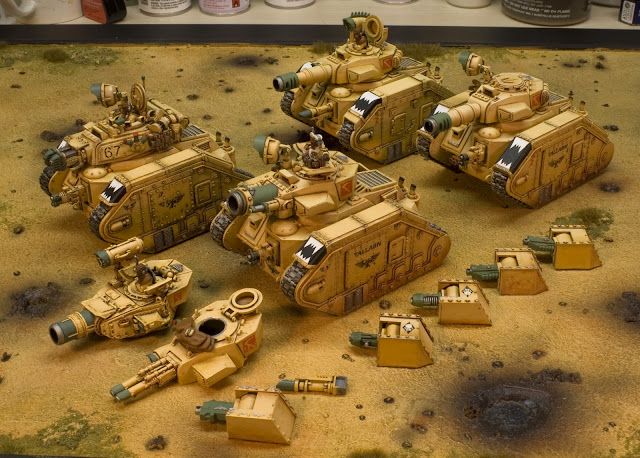 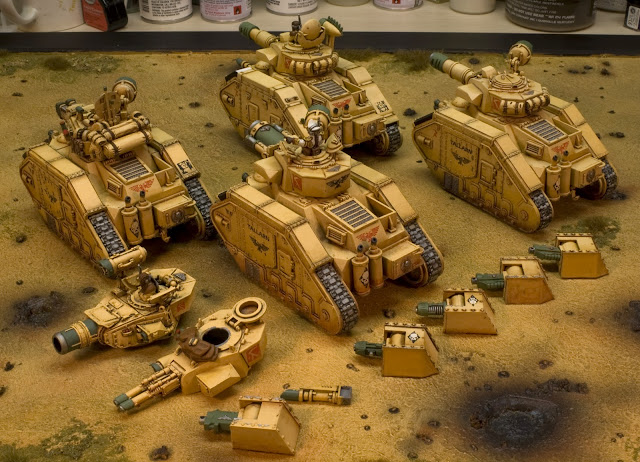 Here's 4 Russes with a pretty good selection of turrets to choose from. The sponsons were ripped off early in 5th Edition and have some cosmetic damage. But I still had them, so I threw 'em in.

Basically you get 4 Squads of Tallarn infantry that can either serve has Veterans with 3 meltas/plasmas, or as Platoon Squads with Autocannons and Grenade Launchers. In which case the Lieutenants with Chainswords can be combined with the unused meltas to serve as Platoon Command Squads in Chimeras. 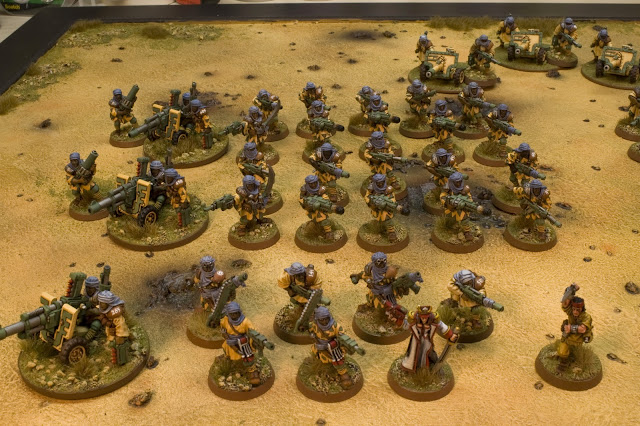 So you can do either this:

Or even this (borrowing a melta from the CCS squad): 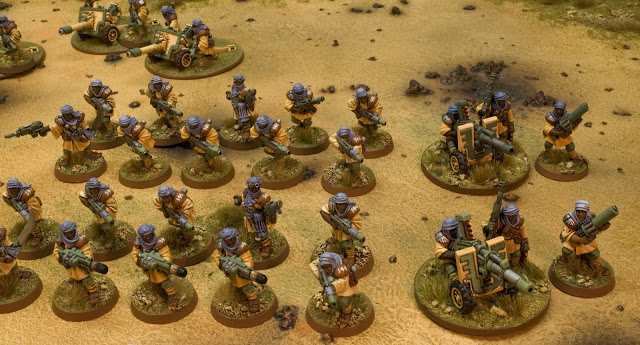 Each squad's men are individually numbered on their shoulder pads. Those numbers match up loosly to the transports they use. So squad 144 uses Chimera 14 and so on.

You also get a Female Commissar and 4 extra troopers for when you don't want to use Grenade Launchers in your squads.

And a Crazy-Indian Marbo. Everyone in the army has painted eyes, BTW.

The Company Command Squad has options for a Regimental Standard, Astropath, Officer of the Fleet, Meltas, or Plasmas.

You also get a Primaris Psyker, who's great as a cheap HQ in small games or as a torrent unit in larger ones.

Then there's the 26 Stormtrooper models. Each one has a 7-layer camouflage pattern that's really nice.

Each squad has both Melta and Flamer options. The Lascannon loaders are great for use as Demo-Charge troopers if you run them as flamer/demo blocking infantry.

I'll also sometimes run them as Vets when I'm using my Tallarns as Platoons. 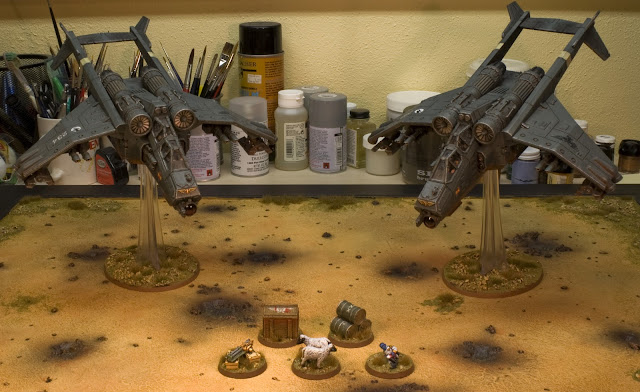 Plus you get air support. These Vendettas were made using the Forge World upgrade kit. 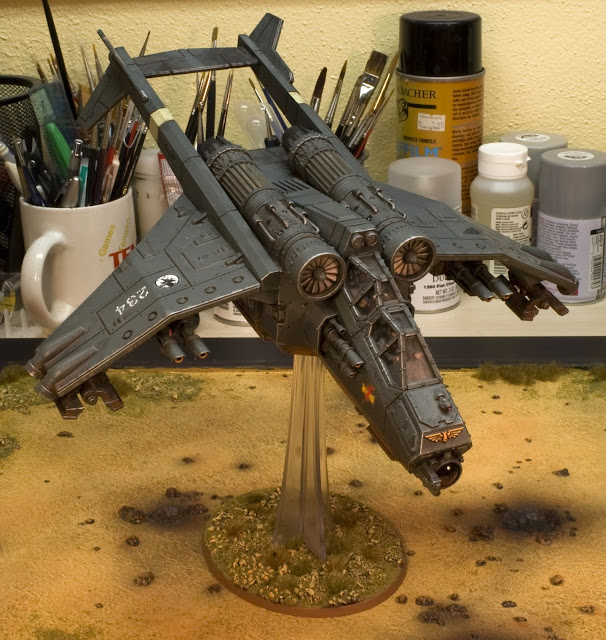 The Vendettas are painted Air Force Green because that's what the ground support aircraft are painted in Iraq (with dirty orange bottoms). The theme of the whole army is Lawrence of Arabia meets the Iraq war. 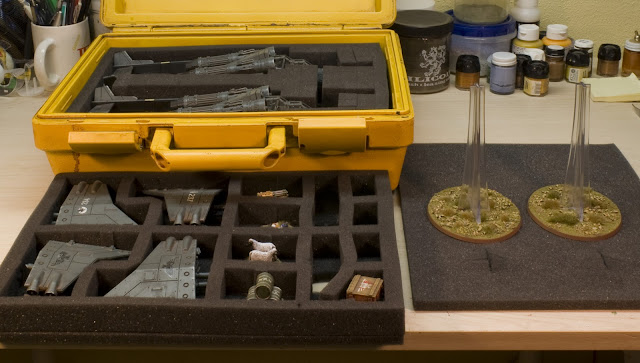 The Vendettas come with their own GW carrying case. Everything fits inside, even the flight stands. You just poke them down through the foam once everything else is in. 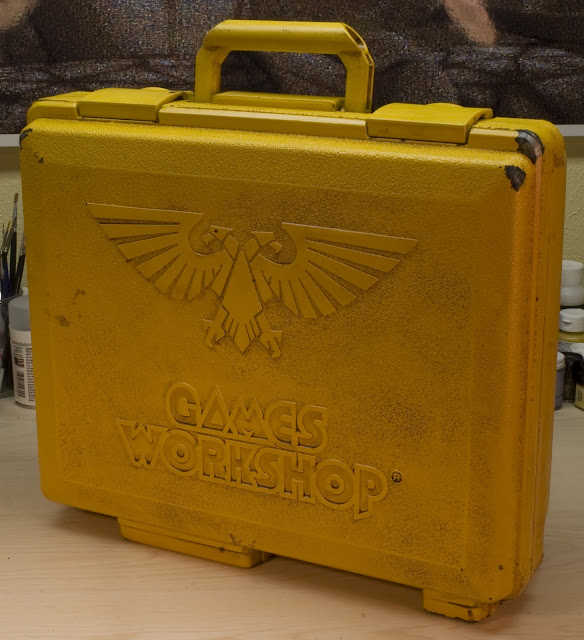 The case has been weathered with floor polish and some paint to look like it's a beat-up metal case.

A double-wide GW case holds the rest of everything you would take to a tournament. There's space for 9 Tanks and their turrets in the bottom. While the top can hold all of the infantry and their options. 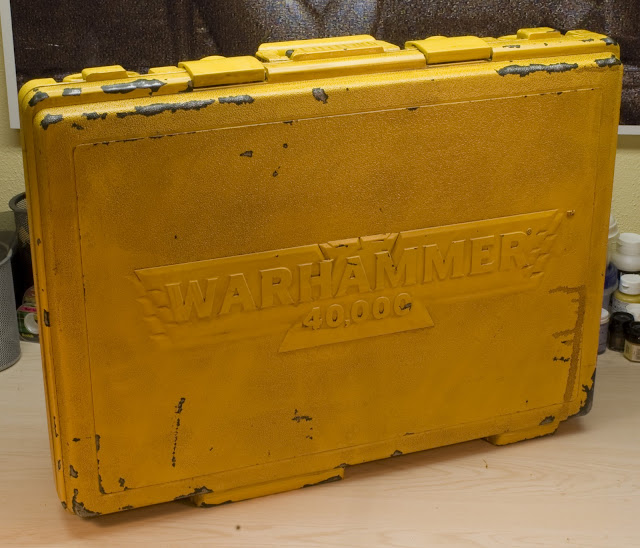 This case has been weathered too.

You also get this custom made display/carry board so your army can look it's best at tournaments.

Last, but not least, you get 2 full bottles and 2 half-full bottles of Bronzed Flesh (which GW doesn't make anymore). Plus the 3 lighter shades I've used on all the models in the army.

And that's it! It's a competitive tournament army that looks great. I got 24th in appearance at Adepticon and 3rd in appearance at NOVA this year with it. The thing that always stands out the most is how bright the colors are compared to everyone else. It's quite striking.

Edit: The auction is now live! Here's the link: